Crafting a strong conclusion to your journal article or book chapter

If you find that your writing often ends weakly, you may be giving away too many of your secrets in the openings of your work.

Any suggestions for strong conclusions? I struggle with writing good endings for articles and book chapters. They seem to fall flat somehow.

In his The Elements of Academic Style: Writing for the Humanities (2014), Eric Hayot argues that the beginnings and endings of individual paragraphs have slightly different roles. Paragraphs open by “mak[ing] a set of promises about the content to come” — as opposed to outlining the content of the paragraph, says Hayot (p. 61).

He details his ranking scale for characterizing the content of a sentence, with 1 being “raw, unmediated data or information” — we can imagine a quotation from a primary source or a description of a shot in a film — 3 being a “conceptual summary” or “broad example” that might connect evidence to a thematic or historical or theoretical context, and 5 being an “abstract, general” claim: a big-picture take-home idea that can be extrapolated from one discussion of one moment in one primary source and then applied in other contexts or settings or spaces or texts.

Hayot’s point in assigning these numbers to content is that paragraphs in humanities’ disciplines — and, I’d argue, in the social sciences as well — have as their Platonic form an “uneven U,” which Hayot illustrates: 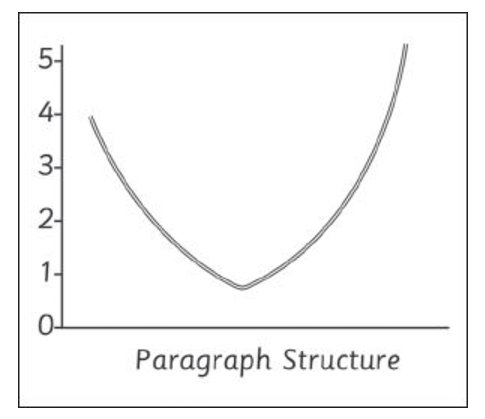 These paragraphs open with content that could be ranked at a 4, but close with content at a 5. Hayot argues that a paragraph should open with a promise — a claim that its level-1 evidence will support — but close on a more abstract, conceptual plane, articulating the relevance of that paragraph to the overarching argument that the work, as a whole, is making.

I’m struck by the parallel between Hayot’s illustration of his Platonic structure and psychologists’ graphs of the serial position curve: 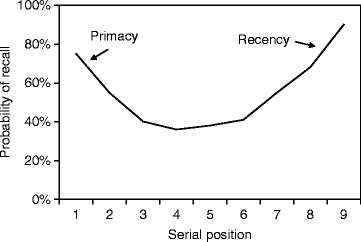 Figure 2: “The serial position curve, showing increased probability of recall for items originally presented at the beginning and end of a list” (Troyer, 2011).

Psychologists tell us that we find it easier to remember items placed at the beginnings and endings of a list, rather than items in the middle.

This serial position effect appears to be caused by the interactions between our different types of memory: the first items in a list have the highest chance of making it into our long-term memory because no prior items are there to obscure them; the last items in the list are preserved in our short-term, working memory, quickly recalled and quickly forgotten.

We tell our undergrads to study for exams in chunks, rather than cramming it all in one long sitting, as — in keeping with the serial position effect — they’ll retain more information if they have lots of study periods with lots of beginnings and endings.

When writing your paragraphs, think of your reader as attempting to memorize items in a long list. They’ll retain what’s at the beginning of your paragraph, use it to interpret the information you present in the middle (which, sorry, they’re least likely to retain), and then can keep your paragraph’s conclusion in their short-term memory as they transition on to the next chunk of text. Most likely, what you want your readers to remember is your high-level argumentative point, rather than some small interrogation of some small detail (or, worse, someone else’s words!), and so your paragraphs ought to end at what Hayot would term a level-5 sentence.

Where Hayot’s advice for individual chapters is most relevant for you, dear letter-writer, is in the scoped-out view of the work as a whole: 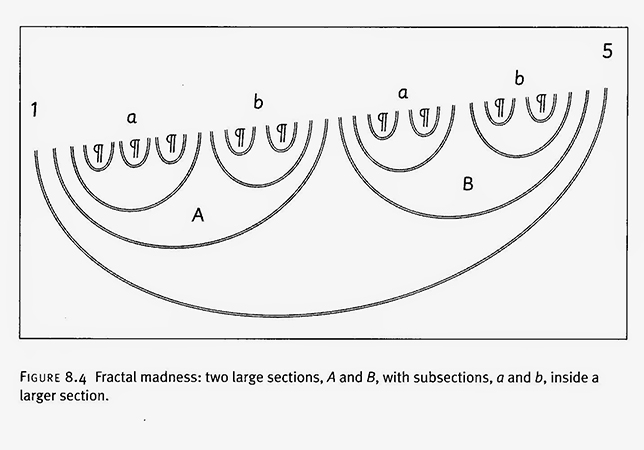 Figure 3: Hayot’s conception of a series of individual paragraphs gradually building on one another and increasing in complexity, which he terms “fractal madness” (p. 70).

If each paragraph opens with a promise and ends with a slightly more abstract, more general take-away, then you can imagine your work as a whole as similarly ending in a conceptually broader place than where you begin.

With conclusions that regularly fall flat, letter-writer, you may be giving away too many of your secrets in the openings of your work. Don’t spoil the ending for us. As Amitava Kumar wrote in Every Day I Write the Book, “everything need not be stated or explained in the very first paragraph”: “Why are dull stories told, without a compelling plot or structure? [Radio host] Ira Glass believes he knows who is responsible. He says, ‘I blame the topic sentence’” (2020, p. 82).

Ask Dr. Editor is a monthly column by Letitia Henville, a freelance academic editor at shortishard.ca. She earned her PhD in English literature from the University of Toronto. Have a question about academic writing or editing? Send it to her at shortishard.ca/contact or on Twitter @shortishard.
COMMENTS
University Affairs moderates all comments according to the following guidelines. If approved, comments generally appear within one business day. We may republish particularly insightful remarks in our print edition or elsewhere.