Zombie-proof your writing: tips for making the conceptual concrete

Clarify your concepts by structuring your work around nominal peaks and concrete valleys.

One of the things that drew me to literary studies was all the fun theory. But it turns out “theory is fun” is not a universal perspective! I find conceptual language really useful in my work, and I know why my work is important, but I have a hard time making those concepts real for others. I’ve been told my writing is “up in the air.” Any advice on how to bring it down to earth?

To answer this question, I’ve turned to my colleague Y.Z. Frankel, who shares the below:

“Get rid of nominalizations!” is one of the most common (good) pieces of editing advice you’re likely to get. Nominalizations – “zombie nouns,” as Helen Sword calls them – turn actions into abstracted nouns, obscuring their actors. For example, instead of writing “individuals, businesses and corporations engaging in the trade and barter of goods and services through private markets,” we write “capitalism.”

Conceptual language enables “simplifying and schematizing complex material in such a way as to be able to say something unexpected” (Graeber 2006) – which is a crucial aspect of humanities research. But abstract language can increase the imaginative effort necessary to comprehend your research, which David Graeber names “interpretive labour.” More interpretive labour means a heavier cognitive load for your reader; a heavier cognitive load means more of what Chris Olah and Shan Carter call “research debt”; and more research debt makes your work harder to read and to digest, which diminishes your chance of being influential and cited. In other words, zombie nouns suck the life from your writing – and your reader!

For academics generally – and humanities researchers specifically – abstractions are an unavoidable professional hazard, and so zombie-proofing is a professional necessity. Our concepts needn’t obscure the concrete stakes – practical, political or ethical – of our research. When we take a look at how clear writers breathe a little life into their zombie nouns, we see a common pattern that I like to call “nominal peaks, concrete valleys.” To visualize this pattern, I’ll first show you the content of a STEM text and then a humanities one using writingwellishard.com – focusing on what the tool tells us about the use of nominalizations in the text.

As this graph shows, in Dr. Goh et al.’s paper, the nominalization are clustered together, primarily in three nominal peaks – and after each peak, there’s a steep drop in the number of nominalizations. These zombie nouns are not only clustered spatially, but also semantically. “Emotion” is one of their key zombie nouns, and it’s semantically connected with others in the first nominal peak: “expression” and “happiness” (highlighted in purple, below); also a part of this nominal peak are “incarceration” (associated with feeling persecuted), “question” (associated with feeling curious), “sadness,” “depression,” “treatment,” and “anxiety.” 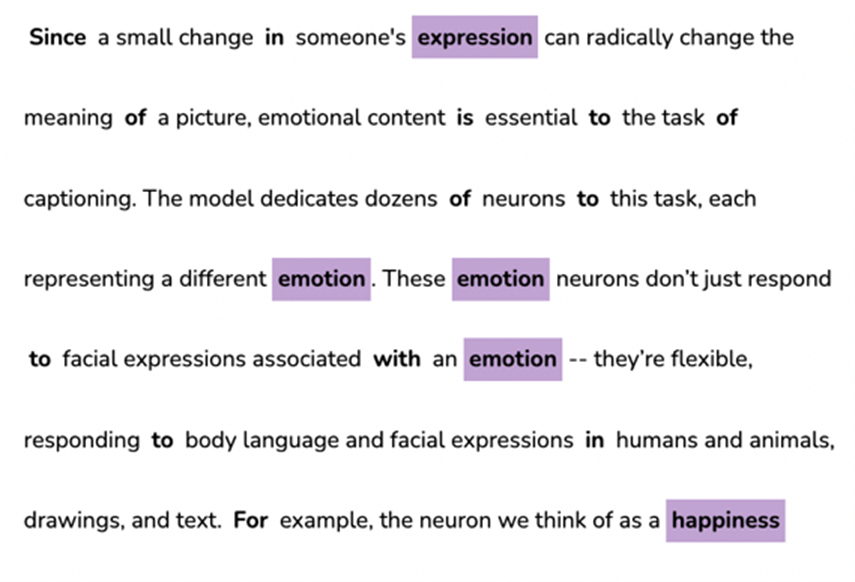 Later nominalizations are clustered around the key term “region”: “immigration,” “ethnicity,” and “terrorism.” The final nominal peak brings together zombie nouns which describe the function of the software they are studying: “visualization,” “vision,” “activation,” “function,” “information,” “discussion.” Even when using a large number of abstract terms in close proximity, Dr. Goh et al. keep their text readable by ensuring that these nominations are related and form discrete semantic clusters.

The passages in which zombie nouns drop – the concrete valleys – are where the authors use specific examples or data to unpack their abstractions. This can be accomplished with definitions, examples, experiments or even personification. Dr. Goh et al. emphasize experiments and examples; the passage after the first nominal peak, for instance, dips into the concrete valley with a case study of “Africa neurons.”

In Dr. Goh et al.’s text, the passive voice tends to peak when zombie nouns dip into the concrete valley, such that the passive and nominal peaks alternate like a wave function. The nominal peaks are bridged by peaks of passives which, when used strategically, help to concretize nearby zombie nouns by emphasizing what is or has been done. As we see above, passives peak early in the paper, before the first nominal peak. As the nominal peak focuses on two types of AI neurons (the aforementioned “emotion” and “region” neurons), the passive peak that precedes it lays some of the groundwork as to how they work: 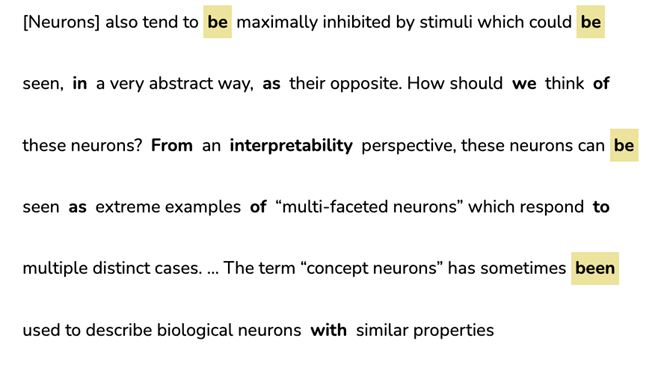 Humanities academics like you, dear letter-writer, use similar methods. Take for example the introduction to feminist theorist Sara Ahmed’s monograph The Cultural Politics of Emotion:

While “to be” verbs may make for unexciting prose, they are essential when defining terms. Dr. Ahmed’s two densest peaks of “be”-verbs take place around two of her four highest nominalization peaks. The first “be”-verb peak, for example, represents the point where she explicates a central concept – her theory of emotion. Dr. Ahmed gets from the nominal peak to the concrete valley by means of real, political examples and careful definition of terms. She begins by quoting propaganda by the far-right British National Front. Using “be”-verbs, she unpacks what is implicit in their propaganda:

One final point worth noticing: the density of zombie nouns drops over time in all the above examples, hitting a low point at the very end of the text. This gives us insight into the question of crafting strong conclusions: with all the interpretive labour at your back, the conclusion is the perfect space to reinforce the most important political, practical or ethical implications of your research. When you help your reader to connect your work to something concrete – some matter that matters – your research becomes easier to understand, process, remember, and, if you’re lucky, cite.

Ask Dr. Editor is a monthly column by Letitia Henville, a freelance academic editor at shortishard.ca. She earned her PhD in English literature from the University of Toronto. Have a question about academic writing or editing? Send it to her at shortishard.ca/contact.
COMMENTS
University Affairs moderates all comments according to the following guidelines. If approved, comments generally appear within one business day. We may republish particularly insightful remarks in our print edition or elsewhere.