Sarah Lockyer, an Acadian from New Brunswick, earned her PhD in bioarchaeology at Bournemouth University in the U.K. She is now the Canadian Armed Forces’s casualty identification coordinator and forensic anthropologist. She can be found on Twitter @s_lockyer. 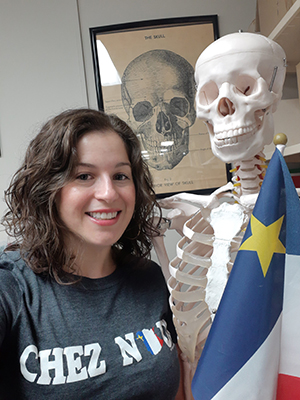 What did you hope for in terms of employment as you completed your PhD?

Truth be told, I hoped for a job, any job. It didn’t matter the field, it mattered that I would eventually have a job. Jobs in bioarchaeology and forensic anthropology are not in abundance and almost all are academic positions. I knew very early on that I did not want to teach or be a professor. My dream was to work full time as a forensic anthropologist. So why do a PhD if I had no intention of pursuing a career in academia? After getting my MSc, job prospects were pretty much non-existent for my field so I figured that my prospect of maybe getting a job some day in my field could potentially be improved with a PhD. I loved studying bones and the human skeleton and I was very fortunate to have very supporting parents who encouraged me to continue my studies.

Once I finished by PhD, the job prospects for my field were still bleak. So I had accepted the fact that my career may very well go down a different path than what I had hoped. I figured I had many transferrable skills allowing me to find new paths and new goals. I wanted to keep my mind open and see where I could contribute and add value. But I still hoped to one day be able to contribute to excavations of mass graves such as for human rights violations investigations or contribute to the identification process during a mass fatality incident (disaster victim identification). I told myself that just because I didn’t start my career in the field did not necessarily mean that I would never get a chance to work in my field.

What was your first post-PhD job?

I am now the casualty identification coordinator for the Canadian Armed Forces. I work to identify the newly discovered remains of Canadian service personnel who have no known grave following the First and Second World Wars, as well as the conflict in Korea.

How did you get this job?

At the time I was working as the executive assistant to a director in human resources at Parks Canada on a casual contract (90 days of work). One afternoon, I decided to check out the internal job postings for the federal public service. Due to my status as a casual employee, I was not eligible to apply to internal job postings, but I wanted to prepare myself and see what types of jobs I would be able to apply for once I was eligible. The third job posting on the list was for a 10-month assignment as “casualty identification coordinator.”

After freaking out for a good hour or so (as this was my dream job), I decided to reach out to the human resources advisor on the posting. My thought was that I could at least let them know I was in the area, very well qualified and very interested in the position, even if I could not apply. I figured that maybe this would lay the ground work for a permanent position in the future. In the end, I sent them an email explaining my ineligibility, asserting that I didn’t want to break the rules, and that I was simply letting them know that I was interested and available should circumstances change.

Four weeks later, I got a call from the hiring manager for the dream job: they wanted to offer me a casual contract. However, four days before taking that call, I had signed a letter of offer for a six-month term position with Parks Canada. That term status made me an official employee of the public service and meant I would eventually get medical and dental benefits, start contributing to the pension, and be able to apply to internal job postings. I declined the casual contract for my dream job and honestly felt sick for the rest of the day. Considering that I had searched for a job for two years, and my dream job was offering a temporary contract – it was unsure at the time whether or not the incumbent would return to the position; if they did, I would have to leave my dream job – with no benefits, I could not give up a term contract in the public service.

However, I did not want to just leave behind any possibility that some day it could work out. I started emailing the hiring manager every three or fourth months. I would update them on my status within the public service and at the same time inquire about the incumbent’s possible return to the position. Almost one year after I saw the job positing, the hiring manager called me again saying the temporary person they had hired was leaving the country and they needed someone ASAP. This time they were able to offer me a term contract, allowing me to keep my status within the public service, which included benefits and a pension. Almost a year after that, I was offered the permanent position.

What kind of tasks do you do on a daily and weekly basis?

When I am in my office in Ottawa, I coordinate the investigation into the identity of newly discovered skeletal remains believed to be Canada service personnel. That includes requesting a historical analysis of the area where the remains were found, analyzing the list of missing to narrow down candidates, tasking genealogical research and DNA testing. I am also responsible for reviewing scientific results, processing invoices, and overseeing a yearly budget.

When I am overseas, I get to work directly with the human remains. The remains of Canadian service personnel who died before 1970 are not repatriated to Canada but buried in the closest appropriate cemetery to where they fell. Therefore, I must travel to where the remains are stored until the investigations are completed. My main task while working on the remains is to establish a biological profile which helps narrow down the list of potential candidates generated by the historical analysis.

What most surprises you about your job?

Science can throw you some unexpected curve balls that you then have to address and explain. I am always learning new things that were completely unknown to me before.

What are your favourite parts of your job?

Travelling for work is pretty great. But I would have to say that one of my favourite parts of the job is when I am able to use my skills and analyze the human remains. That’s what I studied and trained for and it is very gratifying to put them into practice. Another favourite part of the job is being able to tell the family that their relative has been identified. For a bit more on this, watch this short video that the Canadian Armed Forces recently released about my work:

What would you change about it if you could?

Lightheartedly, I would change the DNA tests results! We test a number of soldiers’ families for each case. Due to the ratio of candidates to set of remains (~10+ : 1) the DNA test results are more likely to be negative than positive. A not so fun part of the job is that I then have to relay that information to the donor and family and let them know their relative has not been found. It would be great if I could always relay good news. But I can’t control the results so I continue to hope that if this round of testing is negative, maybe the next one will be positive.

What’s next for you, career-wise?

At this point I am not quite sure. I never expected to have my dream job this early on in my career. I do very much love my job but it shouldn’t mean that I stop setting career goals. So I am reflecting quite a bit on that lately and will continue to do so in the next months. However, I still very much want to contribute to human rights violation excavation/investigation, to the investigation of a mass fatality incident, and do disaster victim identification at some point in my career.

What advice or thoughts do you have for PhDs in career transition now?

My advice would be to stay open minded. There are so many different jobs out there where transferrable skills are highly sought. People with PhDs can write, learn quickly, think critically and analytically, etc. These are all skills that were incredibly useful to me when working in other fields and these skills got me noticed by management. You may not end up where you thought you would, but maybe by being open to different opportunities, you will find where you want to be.