As an eventful 2021 comes to an end, here are the stories and issues that shaped the year in Canadian higher education. Re-enjoy some of our award-winning content during your holiday break. And in the spirit of the season, share this newsletter with anyone in your network who may not know about UA. 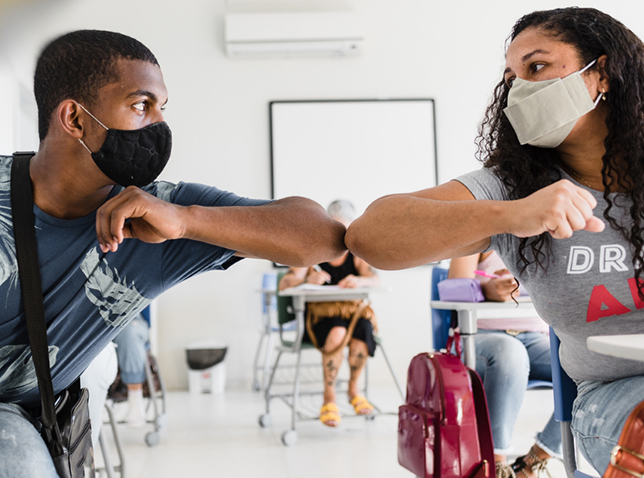 Universities continued to adapt as the pandemic rolled on

As the calendar switched from 2020 to 2021, students, faculty and administrators were still adjusting to remote work. Some faculty were starting to see positive results from their pivot, some tried to figure out what experiential learning should look like now that everyone was remote learning, and others let their students know that they were not alone in feeling lost and stressed. Meanwhile, staff who usually helped students on campus continued to figure out how best to offer mental health services online.

However, it wasn’t all bad. Libraries continued to offer invaluable services during the pandemic and instructional designers were thrust into the spotlight, showcasing their unique talents on how to adapt courses online for faculty, and some online alumni events were better attended than in previous years after going virtual.

For our part, we published several advice articles on how faculty can connect with their students online, how to supervise graduate students over Zoom, whether to make your course asynchronous or not, as well as how to effectively build an online classroom community. Some academics even had to go through the unique experience of leaving one job and starting another, all in a virtual environment. As Dinuka Gunaratne said in his advice column, “Patience, practice, and preparation. These became the three ‘Ps’ of my pandemic interview mantra.”

As the weather warmed up, university administrators started debating several issues over Zoom: should we head back to campus in the fall? What does that even look like? Then, in mid-July Seneca College was the first postsecondary institution to announce that it would be requiring students and staff to be vaccinated in order to return to campus for in-person learning. A number of institutions followed suit shortly thereafter, and soon every university across the country was debating whether to adopt a vaccine mandate. As Maxwell J. Smith, Jacob J. Shelley, Justine A. Dryburgh and Ivy Duong explored in their opinion column: “Many will be keen to see vaccination requirements implemented on university and college campuses in order to keep themselves and others safe. Others will oppose such requirements, and this opposition is likely to be framed in terms of rights violations.”

By the end of summer most had mandates in place, and universities then tried to get ahead of some the inevitable socializing and mental health issues that were bound to crop up after students had been cooped up in their bedrooms for the past year, while professors re-adjusted their courses for in-person learning.

Just because students and staff were back on campus didn’t mean that everything was sunshine and rainbows. Questions started arising about the financial toll the pandemic had taken on several universities, and whether that special COVID-19 research funding distributed by funding agencies was well-spent or should have instead been earmarked for basic research that could benefit society in the longer term.

With the Omicron variant currently wreaking havoc across the country, universities are once again faced with tough decisions about their winter semesters. As Shannon Dea wrote in her thoughtful column on what a post-pandemic university might look like: “Make no mistake: COVID-19 will leave deep scars on higher education, and on the staff and students who are already most vulnerable within the system. As we begin to imagine the post-pandemic university, we must work to ensure that the changes we make do not deepen existing inequities or create new ones.”

Grappling with truth and reconciliation

Canada’s reckoning with its treatment of Indigenous peoples gathered pace in 2021 – including on many university campuses. We did our best to give this important subject the coverage it deserves, and to include Indigenous writers as much as possible. In April, Kelly Boutsalis explored the ways in which Indigenous researchers and communities are working to shape the future of environmental sciences. Our own digital journalist Laura Beaulne-Stuebing reported in June on the growing pressure at Ryerson University to change the institution’s name, and Riley Yesno followed up in December with an update on how the renaming process is going. We also profiled Ryerson’s Yellowhead Institute, an Indigenous-led think tank that’s putting community ahead of competition.

The cover story for our July-August issue took a broad look at what universities in different parts of the country are doing to advance the recommendations put forward in the Truth and Reconciliation Commission’s final report. What emerged was a contradictory picture detailing the significant progress that has been made and the much more difficult work that lies ahead. As Shelly Johnson, the first Canada Research Chair in Indigenizing Higher Education, put it: “We’re long on rhetoric and we’re long on basic low-hanging fruit. That is, how do we get more Indigenous people hired? How do we involve elders in a meaningful way? How do we provide more scholarships or bursaries to Indigenous students? And really that’s where it ends, mostly, across the country.”

The work that remains to be done was in focus at the National Building Reconciliation Forum, which was held virtually in September and attracted around 400 participants. The event included testimonials from ambassadors representing the 11 First Nations of Quebec. One of them was Andrea Brazeau, an Inuk from Kangiqsualujjuaq, who said the desire for reconciliation needs to be realized through more concrete action. “For example, all university professors should be educated on Inuit and First Nations and on major events in our history, like colonization, residential schools, and the sled dog slaughter,” she said in our story about the forum. “They need to know all of that to understand us.”

The pandemic continues to shine a light on the unequal treatment of women in academe. We published several articles highlighting this, including one about how women are more likely to be the victims of workplace harassment and less likely to have their research published in scientific journals. Why? Because, in addition to being researchers, women are expected to be full-time mothers, wives and housekeepers. They have also taken on more of the emotional work, both at home and in their jobs, and many were expected to continue working at the same rate they were pre-pandemic.

However, things are starting to slowly change. Women are speaking up about this glaring imbalance. As Diana Cucuz wrote in her opinion piece: “I am going to reiterate the importance for us, as women, to embrace those accomplishments, big or small, academic title or not. We need to tout them when necessary, and encourage and applaud other women for doing the same.”

Two former university presidents, Martha Piper and Indira Samarasekera, even wrote a book about how women need to have more nerve in order to move ahead in their careers. As Dr. Piper said in her interview with Julie Cafley: “As women, we know how to work hard in spades. Nobody works as hard as women do. But what we often lack is nerve. And by nerve, I mean the decision to act, to step out, to do something a little differently and to balk the trends.”

Dr. Cafley explored the issue further in her cover story about the struggle for gender equality in university leadership, which highlighted why several women presidents were asked to leave their position before their mandate was finished. She even offered three ideas to advance change in academe, so that women don’t find themselves in the same situations in the future: using data and metrics methodically and publicly, advancing cultural awareness, and designing equity more purposefully.

The struggle against systemic racism was another focus of our coverage over the past year. A number of stories dealt with a particular form of it that has sadly grown more pervasive since the start of the pandemic. The University of British Columbia hosted the inaugural National Forum on Anti-Asian Racism in June. Ahead of that event, we published a story in which Santa Ono, the president and vice-chancellor of UBC, opened up about his own first-hand experiences with the rise in anti-Asian discrimination. “I don’t want that to be the Canada for my daughter,” he said.

When Ryerson University hosted a second forum in November, one of the lead organizers penned an opinion piece about the lessons that came out of it, and the importance of keeping the momentum going. “Vulnerable to the recent spate of anti-Asian hate crimes, emboldened by the Black Lives Matters Movement and angered by the tragedies of residential schools, I believe now more than ever that we must critically address the systemic racism and colonialism that pervade our institutions of higher learning,” wrote Pamela Sugiman, Ryerson’s dean of arts. “Simply acknowledging that the problem exists is not sufficient.”

There were also stories on combatting anti-Black racism, and two of the highlights were contributed by Toronto-based writer Tayo Bero. For the July-August issue, she wrote a feature examining what universities are doing on the issue, a year after the Black Lives Matter movement galvanized protests around the world. One of the people she quotes in the piece is Angelique Willkie, associate professor in the contemporary dance department at Concordia University, and co-chair of the President’s Task Force on Anti-Black Racism. “How do we make sure that everybody feels concerned?” Ms. Willkie says. “Because this is not a Black issue. This is an everybody issue.” In December, Ms. Bero followed up with a news feature on the launch of the Scarborough Charter, a national effort to deal with anti-Blackness on campus. Around 50 postsecondary institutions in Canada had signed up for the initiative at time of press.

Throughout the year, we also endeavoured to highlight individuals in the postsecondary sector who are breaking ground in a range of areas, including equity, diversity and inclusion. One of them is Frantz Saintellemy, the new chancellor at Université de Montréal, whom we profiled in October. “I’m 48, I’m Black and I work in IT. That they chose me says a lot about the values of UdeM,” said Mr. Saintellemy, who also co-founded Groupe 3737, a business incubator that focuses on immigration, diversity and inclusion. 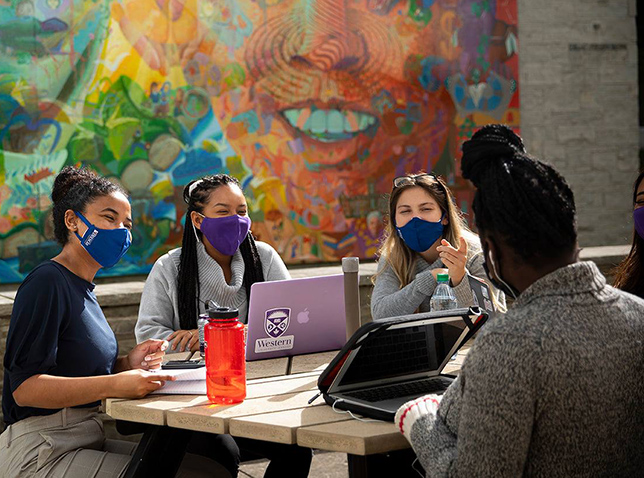 2. PhD graduates continue to seek tenure-track positions despite low odds, says report
Arjun Chowdhury, an associate professor of political science at the University of British Columbia, shared his thoughts on the Degrees of Success report released by the Canadian Council of Academies.

3. The mismatch continues between PhD holders and their career prospects
When the Canadian Council of Academies released a report about the challenges PhD students face when transitioning to the labour market in January 2021, the higher ed community took notice.

4. A PhD leads to meaningful employment but seldom in jobs for which they were meant, reports find
A look at a Concordia University report on PhD outcomes. It showed that most grad students stay in higher education, but in a range of positions.

5. Reconsidering Ryerson: why Indigenous and non-Indigenous students, faculty and staff are demanding the university change its name
In July, our former digital journalist Laura Beaulne-Stuebing explored the truth and reconciliation awakening that’s taking place on campuses across the country.