The filmmaker and founder of York University’s Stereoscopic 3D Lab picked up the Governor General’s Lifetime Achievement Award in Visual and Media Arts earlier this year.
BY BECKY RYNOR
JUN 05 2019 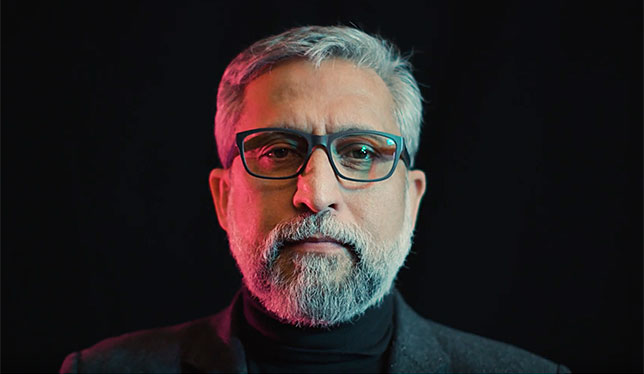 The filmmaker and founder of York University’s Stereoscopic 3D Lab picked up the Governor General’s Lifetime Achievement Award in Visual and Media Arts earlier this year.

Editor’s note: this is the fourth of an occasional series, People to Know, profiling notable people working in Canada’s higher education community. Follow the hashtag #peopletoknow.

Filmmaker Ali Kazimi says his fascination with race, immigration and social justice kicked in minutes after he stepped off a plane in Toronto in 1983. He was 22 years old, and it was his first time outside of India. He and another graduate student had been offered scholarships through an exchange program with York University. They arrived bearing valid passports, student visas and letters of introduction. They had a professor waiting for them at the arrivals gate. Still, he says, the two young men were taken aside for “secondary questioning.”

“They took us into a private room and started questioning the authenticity and veracity of our documents,” Mr. Kazimi says. “It totally shocked me. We were told, ‘These could have been bought in the back streets of Delhi.’”

The two were eventually allowed to enter Canada, but only after the immigration officer told them that “‘the only reason I’m letting you in to my country is because you speak such good English. You will remember me and thank me for doing this.’” 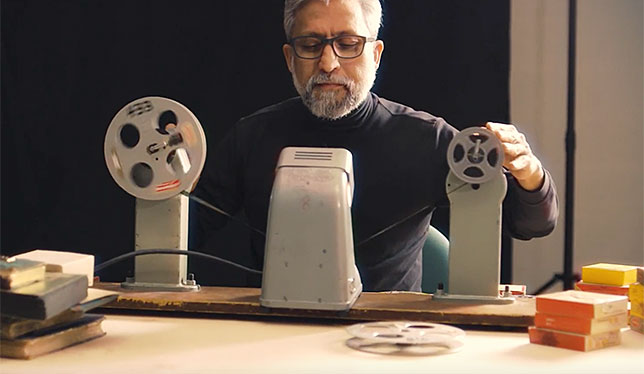 Photo still taken from video by Canada Council for the Arts.

Mr. Kazimi is now an award-winning documentary filmmaker – with credits for producing, directing, writing and cinematography, among others – and an associate professor of cinema and media arts at York, where he founded the internationally recognized Stereoscopic 3D Lab. The lab brings together artists, filmmakers and scientists to create and explore stereoscopic moving images in cinema, installations and new media. Acclaimed as one of Canada’s pre-eminent media artists, his 3D installations are shown in galleries across Canada.

Earlier this year, Mr. Kazimi received a Governor General’s Lifetime Achievement Award in Visual and Media Arts. The award recognizes an artist’s career, body of work and contribution to the visual arts including media arts and contemporary practices in the field.

The first Indo-Canadian recipient of the award, his films turn an unflinching eye on the social condition. Random Acts of Legacy (2016) for example, uses 16mm home movies to show a Chinese-American family’s experience of race and class in Depression-era Chicago. From 1984 to 1996, Mr. Kazimi shot a documentary on another 2019 Governor General’s Award winner, Iroquois photographer Jeffrey Thomas. Mr. Kazimi says Shooting Indians: A Journey with Jeffrey Thomas (1997) was undertaken to “unravel the hidden history” of the land he has chosen as his home.

“The hidden history is the treatment of Indigenous peoples,” he says. “I was shocked when I came here. People asked me about culture shock. I grew up speaking English; I am familiar with Western popular culture; I come from a city that is several times bigger than Toronto. What shocked me was the position of Indigenous peoples in Canada.”

Filmmaker Kathleen Mullen credits her former professor with mentoring her, encouraging her and helping her “make the film I wanted to make. “He was my supervisor for my documentary, Breathtaking,” she says. “It never would have been as good without his support and mentorship. I have a huge respect for Ali as a teacher and obviously as a filmmaker.”

York psychology professor, Laurie Mae Wilcox collaborated with Mr. Kazimi on research into the visual impact of 3D stereoscopic imagery and how the brain processes it.

“Ali is a filmmaker and an artist, but he has this appreciation of science and the desire to understand the science that underlies the effectiveness of these tools he is using,” she says. “It made for a really wonderful collaboration.”

Perhaps most remarkably, says Karen Tisch, executive director of Toronto’s Koffler Centre of the Arts and Mr. Kazimi’s nominator for the Governor General’s Award, “his works have quite literally inspired change in the world, informing and shifting public opinion and galvanizing efforts towards concrete political action.”

While Mr. Kazimi says the kudos affirm his 25-year exploration of race and stereotypes, he adds, “it also saddens me.”

“My experience with racism doesn’t come from a theoretical place or a conceptual place,” he notes. “It comes from lived experiences. Which, unfortunately, happen all too often. And which reminds me of the validity of my work.”

PUBLISHED BY
Becky Rynor
Missing author information
SEE SIMILAR STORIES
COMMENTS
University Affairs moderates all comments according to the following guidelines. If approved, comments generally appear within one business day. We may republish particularly insightful remarks in our print edition or elsewhere.