A chancellor that stands apart

“I’m 48, I’m Black and I work in IT. That they chose me says a lot about the values of Université de Montréal.”
BY PASCALE CASTONGUAY
OCT 05 2021 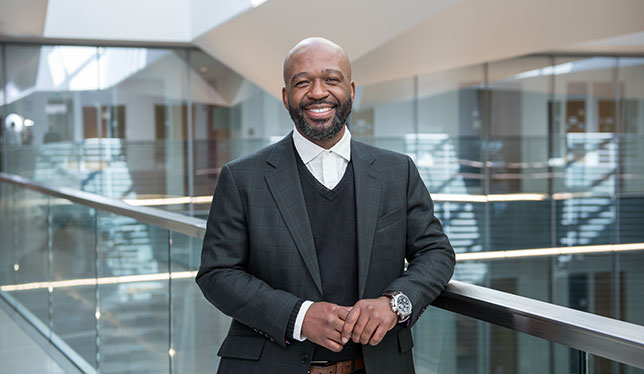 A chancellor that stands apart

“I’m 48, I’m Black and I work in IT. That they chose me says a lot about the values of Université de Montréal.”

The Université de Montréal (UdeM) has appointed entrepreneur Frantz Saintellemy as its new chancellor. He is currently president and chief operating officer of LeddarTech, a Quebec company that develops microprocessors and software for the automobile industry and has sat on the university’s board for four years. Mr. Saintellemy was inspired to become involved with the institution by both Louise Roy, the former chancellor who held the position from 2008 to 2018, and her vision for UdeM’s future.

When he was first approached about taking on the role he was surprised, but any doubts have now dissipated, and he is now confident that he’s the right person to guide the Montreal university as it enters a new chapter and is looking forward to his four-year term.

Mr. Saintellemy describes himself as a “product of education,” and considers postsecondary education to be a “societal stepping-stone.” That’s also why he firmly believes that primary and secondary schools should try to “encourage [young people] to think bigger and do more.” According to him, “we have to make sure we don’t lose [young people] at the start [of the education cycle] so they get the best possible chances” for their future.

Some may view the appointment as a primarily symbolic gesture, but for him it is “so much more than that.” Acknowledging that he is an unconventional candidate for the position, the new chancellor sees it as a testament to UdeM’s leadership. “I’m 48, I’m Black and I work in IT. That they chose me says a lot about the values of UdeM,” he said.

Although he is no stranger to philanthropy and it is not uncommon for the position of chancellor to come with the responsibility of fundraising for the university, he firmly believes that his main focus will be on innovation and the digital shift. In fact, he is also vice-president of the Quebec Innovation Council, which is currently working on the development of the next Quebec Research and Innovation Strategy. According to him, the two roles complement each other well. “They go hand-in-hand; they’re intimately linked,” he said, adding that he is not the only one in this position – the chair of the council is Sophie D’Amours, who is also the rector of Université Laval.