A meeting of minds in Montreal

June 6, 1911: the day Canada’s universities joined together in a national body.

The forecast was for fair skies, high of 72 degrees, as the day dawned on Tuesday, June 6, 1911. It was an improvement from the cool and rainy conditions that prevailed the night before, which had kept the local crowd small for the ballgame, won by the hometown Montreal Royals 6-5 in 10 innings against the Toronto Maple Leafs. 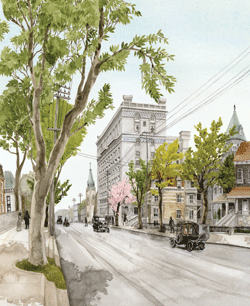 A depiction of Montreal’s Sherbrooke Street in 1911. Illustration by Melinda Josie.

That morning the front page of the Montreal Gazette carried not one, but two stories on the proposed reciprocity agreement with the U.S., foreshadowing the coming free-trade election battle which would end the 15-year reign of Laurier’s Liberal government in September. At present, however, all was quiet on the political front as Parliament was adjourned for eight weeks to allow senators and MPs to visit England for the coronation of King George V on June 22.

At home, enumeration had begun the week before for the 1911 Census, while in local news the Gazette reported on the official opening the previous night of McGill University’s new medical building by the Governor General, Earl Grey. The ceremony was topped off by the felicitous announcement that McGill chancellor Donald Smith, Lord Strathcona, would donate $100,000 to finish the building.

Also in the Gazette that day, buried near the bottom of page 9, was this small item: “Secretary of Empire Universities will confer with Canadians.” The individual in question, R.D. Roberts, university extension registrar at the University of London, had arrived in Montreal that Sunday aboard the S.S. Megantic.

He was in town to attend a meeting of the executive heads – or, in their stead, other senior administrators – of Canada’s universities. The Conference of Canadian Universities had been convened by McGill Principal William Peterson and University of Toronto President Robert Falconer, with McGill playing host to the one-day event.

At the time, a meeting of university presidents was rare, and it is unlikely few of the attendees that day had any clear perception that they were laying the foundations for a permanent national body representing Canada’s universities. Within the next seven years, the newly named National Conference of Canadian Universities would meet another four times and regularly thereafter. Renamed the Association of Universities and Colleges of Canada in 1965 and now representing 95 universities and university-degree level colleges, the national organization celebrates its centenary this year.

The purpose of the 1911 conference was unique in that the university heads had gathered to pool their ideas for topics to discuss at another meeting, the Congress of the Universities of the Empire, to be held in London in 1912. Dr. Roberts, secretary of the London congress, was invited to Montreal to discuss its aims and to report back to London on the issues of importance identified by the Canadian institutions.

Nineteen colleges and universities were invited to Montreal: three from the western provinces – the universities of Alberta, Saskatchewan and Manitoba; seven from Ontario – University of Toronto (and its two federated colleges, Trinity and Victoria), Western, McMaster, Queen’s and Ottawa; three from Quebec – McGill, Bishop’s and Laval; and six from the Maritimes – University of New Brunswick, Mount Allison, St. Francis Xavier, Acadia, King’s and Dalhousie. Acadia and King’s declined the invitation, and the delegates from Alberta and Manitoba were unable to come at the last moment. In total, 18 academics attended, representing 15 institutions.

The Canadian nation of 1911 was less than a half-century old. That year’s census would put the population at 7.2 million, of whom 1.6 million were immigrants. Eighty-nine percent of inhabitants over age 5 reported that they could read and write.

Around the time of Confederation in 1867, Canada’s universities and colleges were generally small, denominational, relatively numerous and marked by financial difficulties. Most of them had developed organically over time along the U.K. model and retained their peculiarities if not idiosyncrasies. Yet, despite their difficulties, very few institutions failed, and by the early 20th century many were strengthened through federation or amalgamation. The situation was somewhat different in the three western-most provinces, whose governments had each decided to create a single provincial university akin to the state universities in the U.S.

The early 20th century was marked as well by the passing of many of these institutions from church to state control. The era also saw an expansion in the sciences and laboratory instruction, and the introduction of professional fields like engineering, forestry, dentistry and agriculture. Undergraduate enrolment in 1911 was close to 13,000, nearly a doubling from 10 years before, and 1,775 degrees were awarded. Twenty percent of students were female.

The reign of university presidents at that time was often long. Dr. Peterson of McGill, an Anglo-Scot born in Edinburgh, was appointed principal in 1895 and would serve for 24 years. Dr. Falconer, born in Charlottetown the year of Confederation, became president of U of T in 1907 and would serve for 25 years. It is unclear, however, if many of the university presidents knew each other personally or had ever met prior to Montreal.

The conference began with a statement by Dr. Roberts, who outlined the subjects to be discussed at the London congress the following year. In Dr. Roberts’ view, the most vital concerns of the British and colonial universities at this time were “a uniform matriculation standard [i.e., university entrance requirements], in so far as this might be possible, the interchange of professors, and the comparison of and equalization of standards.” He concluded by stressing the tentative nature of the proposed agenda and noted that “it was open to any university or group of universities to suggest other questions than those mentioned in the program for consideration.”

In the discussions that followed, the university heads identified matriculation standards and facilities for graduate studies as the two most crucial common problems. On the former, the presidents expressed their hope that at least “a minimum standard for admission” could be agreed upon. They struck no less than three committees to look into the various aspects of the problem and to report back at a later date.

On the latter issue, the concern from presidents was that Canadian students were going primarily to the U.S. and Germany for graduate studies and not to the Mother Country. The problem, they said, was that British universities did not make their requirements sufficiently clear to Canadian students and that those who did go to Britain were made to take another undergraduate degree before being considered for graduate work.

“Upon this question,” Dr. Roberts wrote, “the opinion was unanimous that … it was of supreme importance that something should be done without delay to divert the stream of able Canadian students from America and Germany into the United Kingdom.”

Among other issues discussed were – of all things – music education, the interchange of professors and university publications, and military education. The federal government had put forward a proposal for setting up officer training programs on campuses, and the conference participants resolved that any such instruction should be funded entirely by the government.

At the end of the day, the participants agreed to again meet in Montreal on their way to the London meeting the following year “if this should be thought necessary,” but no follow-up meeting was held. Dr. Roberts later wrote: “It is clear that the Montreal Conference proved of great value, and it has appeared to the London Committee desirable … that similar local conferences may be arranged in other parts of the Empire.”

The London Congress was held as scheduled in 1912, with many of the Canadian university heads in attendance, but this was followed by a three-year lapse before the Canadian institutions again met. This was most likely due to the unsettled conditions leading up to the outbreak of the First World War. The second Conference of Canadian Universities was again a one-day affair, with representatives from 15 universities meeting this time in Toronto on June 1, 1915.

The delegates were presented with a full program of topics for discussion, under the headings: “Standards for Degrees,” “Transfer of Students,” “Student Life” and “Administration.” The first item up for debate, to no one’s surprise, was the urgency to achieve uniform matriculation standards.

The attendees were not able to discuss all the topics at length and the afternoon was devoted to appointing further committees. One of these was the Committee on Organization, whose task it was “to draft a constitution and nominate officers for the next conference,” thus institutionalizing the operations of this nascent national body.

The 1916 conference, again at McGill, was held over two days in May and was attended by no less than 35 executive heads and faculty members. They adopted a provisional constitution, including the criteria for membership, and assigned an annual $10 fee per representative.

By 1917, at its next conference at the Chateau Laurier hotel in Ottawa, it was becoming apparent that the NCCU was moving beyond matters of purely internal academic concern and was starting to act as a unified voice of higher learning. Two items discussed at the Ottawa meeting were a proposal urging the federal government to offer assistance to First World War veterans to pursue postsecondary education, and the demand that the government remove the dreaded head tax on Chinese students who had entered Canada to attend university.

Back to Toronto in 1915, the conference adjourned on a congenial note, with Dr. Falconer offering “his appreciation of the interest of the universities in the discussions in which they had been engaged, the sense of fraternity engendered, and the power such meetings would have in welding together the different parts of the Dominion.” During informal conversations at the dinner that evening, according to the published proceedings, “several speakers emphasized the importance of the universities of Canada co-operating more closely for the development of a truly national spirit.”

This was “surely the aim of men who envisioned higher learning not as an end in itself, but rather as a means to achieving a much broader purpose – that of furthering the creation of a unified progressive Canada,” wrote Gwendoline Pilkington in her authoritative history of the first 50 years of the NCCU. “A review of their discussions at both the 1911 and 1915 conferences suggests that even then they saw the university not as a narrow single track culminating in academic achievement, but as a wider path with many accesses and exits, all leading to a better life for the nation as a whole.”

References: Harris, Robin S., A History of Higher Education in Canada, 1663-1960, University of Toronto Press, 1976. / National Conference of Canadian Universities, Proceedings, Ottawa: NCCU, 1911, 1915, 1916, 1917. / Pilkington, Gwendoline, A History of the National Conference of Canadian Universities, 1911-1961, a thesis submitted in conformity with the requirements for the Degree of Doctor of Philosophy, University of Toronto, 1974.