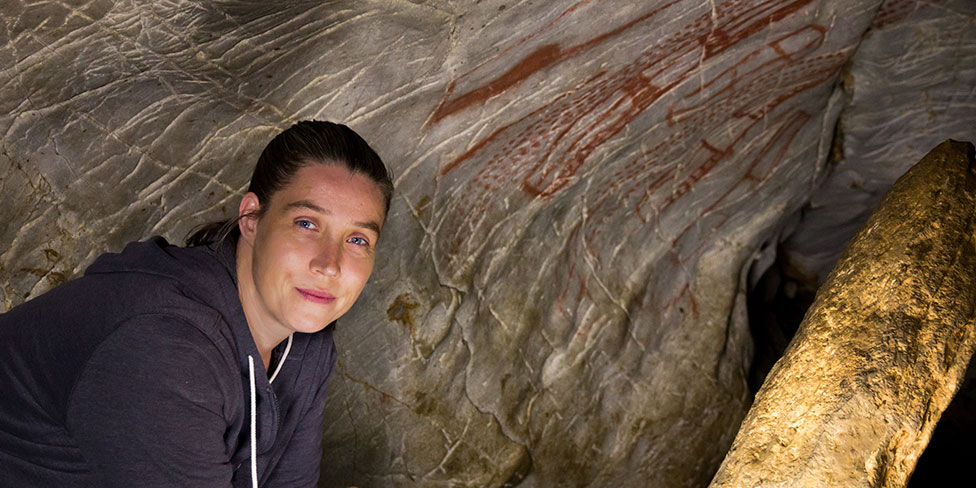 All photos by Dillon von Petzinger.

PhD candidate Genevieve von Petzinger has scoured ancient rock art to create the world’s largest database of early abstract symbols – but what do they mean?

Genevieve von Petzinger’s scientific passion has taken her into some very dark and claustrophobic spaces. The University of Victoria graduate student’s research is focussed on the oldest art in the world – cave art created by early humans between 10,000 to 40,000 years ago. Unlike others in her field, however, her investigations aren’t focussed on Ice Age depictions of mammoths, deer and bison, but rather on various abstract symbols – disks, triangles and crosses – that were painted and engraved on the cave walls.

“I was drawn to the symbols when I first saw them during a class I took as an undergrad,” she says. “They’re so enigmatic. Millennia ago someone went to the effort to put this marking on a cave wall. Why did they do this? Why was it so important?” 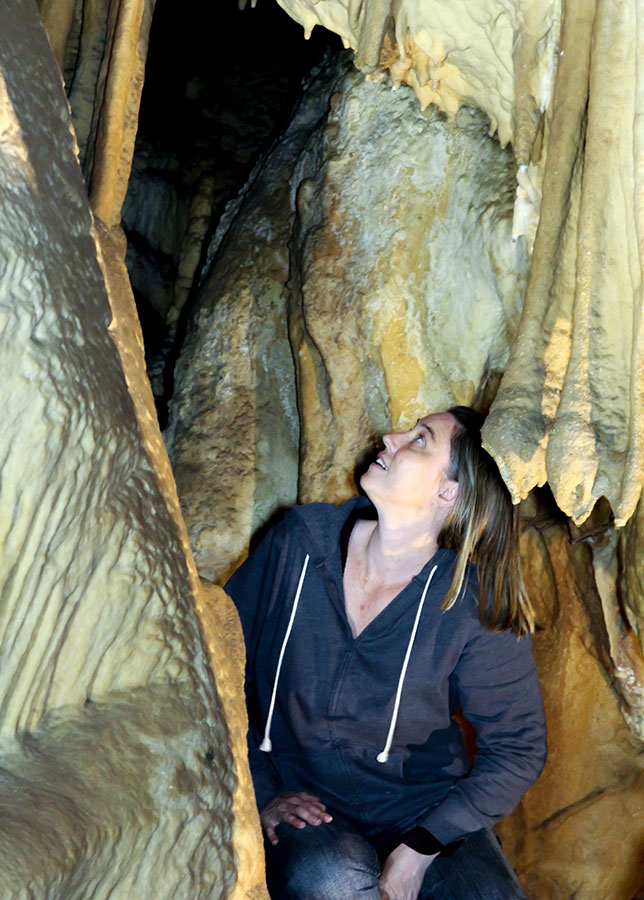 Until Ms. von Petzinger came along, these arcane symbols, which actually outnumber the animal drawings, had never been fully documented. She systematically catalogued signs at 52 European rock art sites, and then combined her data with archaeological reports, articles and books created by past and present scholars, to create the world’s largest database of geometric symbols.

After completing her fieldwork, she analyzed all the collected signs. The result was shocking – across 30,000 years and an entire continent, a mere 32 signs were repeated over and over. “The small number tells you they must have been meaningful to the people using them, because they were replicating them,” she explains.

Although Ms. von Petzinger doesn’t claim that these renderings represent written language, she does feel that they mark a key milestone in human evolution. “It represents the first time that our ancestors could store information outside the body. This is a huge, cognitive leap forward – encoding something that someone else can come along later and understand.”

Unfortunately, their precise meaning has been lost to time. Some may be stylized depictions of objects such as plants or tools, others could be clan signs; or, in some cases, “there may be counting or tallying going on, or early forms of mapping.”

What is clearer to Ms. von Petzinger is that these symbols are older than previously believed. Paleoanthropologists had long contended that cave art was created during a creative explosion that occurred 40,000 years ago when the first Homo sapiens reached Europe. But, as she notes, “I realized that two-thirds of the signs were already in use when humans arrived in Europe,” which suggests that the signs “were part of an existing tradition rather than something new.” She believes they could be part of a larger system that early humans imported from Africa.

Ms. Von Petzinger’s efforts have drawn global attention. A TED talk she gave in 2015 attracted more than two million views, and in 2016 she was selected as a National Geographic Emerging Explorer, a title conferred upon individuals whose unconventional thinking and innovations are changing the world for the better.

In 2016, she also published a book entitled The First Signs: Unlocking the Mysteries of the World’s Oldest Symbols, which caused world-renowned anthropologist and author Wade Davis to declare, “This may represent one of the most extraordinary scientific insights of our time.” Part travel journal, part popular science and part personal narrative, the book takes readers back in time in an attempt to penetrate the psyches of ancient people and examine the first stirrings of human intellect and creativity. 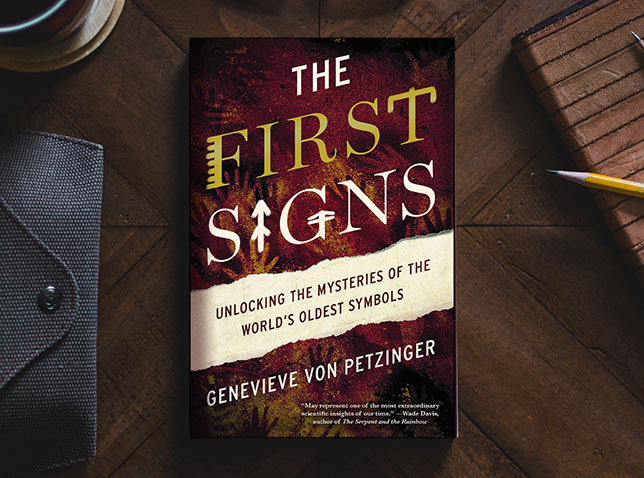 Now nearing the completion of her PhD, Ms. von Petzinger is about to publish several papers containing some fresh findings. She is also working on a project involving Neanderthal cave art and says she may write a children’s book about what kids were doing during the Ice Age.

As well, she is broadening her database to include cave sites in the Balkans and Caucasus, and if she can obtain the funding, she plans to use an underwater robot to explore submerged caverns off the Spanish coast. Because of superior dating technology and advanced research methods, and because archaeologists are now venturing into exotic new locations, she believes that her field is on the verge of a number of important breakthroughs. “Stay tuned,” she says, “there are some amazing revelations to come.”