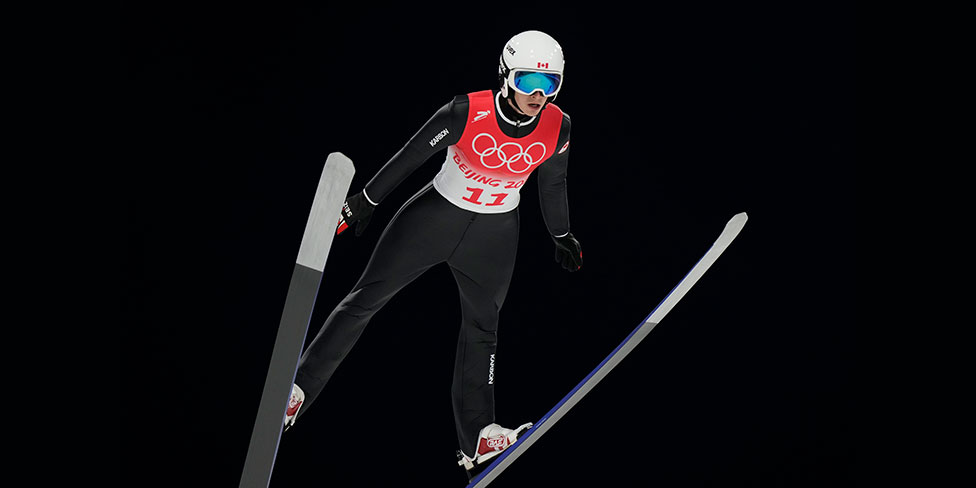 Matthew Soukup, of Canada, soars through the air during the men's normal hill individual ski jumping trial round at the 2022 Winter Olympics, Sunday, Feb. 6, 2022, in Zhangjiakou, China. (AP Photo/Andrew Medichini).

Athlete-scholars competing at the Beijing Olympics

These Canadian Olympians are taking the term “student athlete” to the next level.

The 2022 Winter Olympic Games began on Feb. 4 in Beijing, and among the Olympians hoping to bring home gold are a number of Canadian athlete-scholars who, despite their grueling training schedules, are also completing degrees at Canadian universities. We’ve compiled a list of the ones to watch as well as some of their top competitive moments.

Sport: Freestyle skiing
Education: Completing a bachelor of science with a double major in math and physics at the University of Calgary.
Fun fact: Brendan was still a junior when he was called up to Canada’s national halfpipe team in 2015.
Highlight: He won the gold medal in the freestyle ski halfpipe at the World Cup in Calgary in 2021.

Sport: Snowboard
Education: Enrolled at Wilfrid Laurier University, completing a bachelor of science in psychology.
Fun fact: Jasmine always competes in the same pair of socks.
Highlight: In 2021, she won the bronze medal in the big air competition at the World Cup.

Sport: Freestyle skiing and ski cross
Education: Pursuing a bachelor of commerce in finance at the University of Calgary
Fun fact: She first learned to ski at 18 months old
Highlight: Courtney won a bronze medal in ski cross at the World Cup in 2021.

Sport: Cross-country skiing
Education: Pursuing a degree in business management and marketing at Athabasca University
Fun fact: Dahria is a supporter of Fast and Female, a Canadian charity on a mission to keep self-identified girls healthy and active in sports.
Highlight: At the 2021 World Cup, she matched her career-best individual result with a 15th place finish in the 30km pursuit.

Sport: Speed skating – long track
Education: Pursuing a kinesiology degree at the University of Calgary
Fun fact: He won two high school provincial championships while playing for the football team.
Highlight: He won the gold medal in the 10,000m long track event at the World Championships in 2020, beating the world record.

Sport: Speed skating
Education: She is completing a degree in sociology at the University of Calgary
Fun fact: She is an ambassador for Fast and Female, a Canadian charity on a mission to keep self-identified girls healthy and active in sports.
Highlight: She posted her career-best finish in the 500m speed skate at the World Single Distances Championships in 2017.

Sport: Speed skating – long track
Education: She is enrolled part-time at the University of Calgary, studying geology.
Fun fact: Both her brother and sister have competed nationally in speed skating.
Highlight: She won bronze in the 3000m race, becoming Canada’s first medalist at the 2022 Beijing Olympics.

Sport: Cross-country skiing
Education: She is pursuing a degree in psychology at Athabasca University.
Fun fact: Katherine mentors children through the non-profit organization Classroom Champions.
Highlight: She was the top-ranked Canadian woman in the overall World Cup standings in 2021.
Results in Beijing: Katherine placed 23rd in the women’s 15km skiathlon.

Sport: Snowboard
Education: She is completing an undergraduate degree in life sciences at Queen’s University
Fun fact: She is also a competitive Irish dancer
Highlight: In 2020, she was the first Canadian woman to ever win a medal at the Junior World Championships in an alpine snowboard event.

Sport: Figure skating
Education: Studying urban planning at the University of Waterloo
Fun fact: Madeline was a skating double on the Netflix drama Spinning Out
Highlight: Her personal best in the women’s short program allowed Team Canada to qualify for the free program medal round at the Beijing 2022 Olympics where the team would place fourth overall.

Sport: Curling
Education: Pursuing a degree in education at the University of Alberta
Fun fact: She is the youngest skip of either gender to win three national titles.
Highlight: She skipped her team to a gold medal at the 2017 World Women’s Curling Championship.

PUBLISHED BY
Hannah Liddle
Hannah Liddle is the digital journalist for University Affairs.
SEE SIMILAR STORIES
COMMENTS
University Affairs moderates all comments according to the following guidelines. If approved, comments generally appear within one business day. We may republish particularly insightful remarks in our print edition or elsewhere.

Leave a Reply to Jim A Nicell Cancel reply