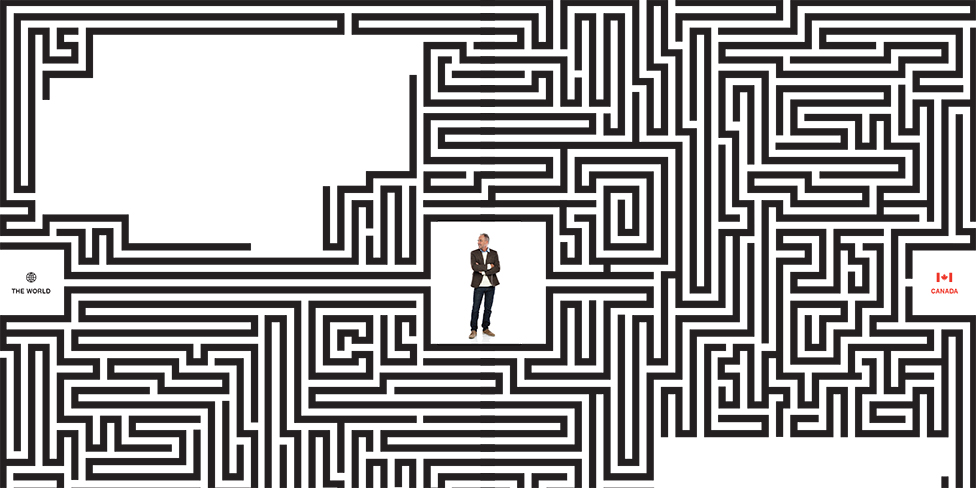 An expat explains how a temporary leave to study in the U.K. turned into a life abroad – and what the government could do to bring him back.

Growing up in small-town Ontario, I always had a nagging feeling that Canadians who moved abroad were traitors. They had shunned our country for monetary gain, or sunshine or fame. But I’ve become one of those people – part of the nation’s brain drain – and I can assure you that it was entirely accidental.

Like me, every year hundreds of Canadians head abroad to do PhDs or postdocs, intent on gathering international experience, and every year a few of them don’t come back. In my case, I was drawn to the U.K. to do a PhD in history and, two years after finishing, I am still there, now working as an academic historian. I’d like to share how that happens and what Canada might do to prevent it from happening again and again.

I did not go abroad to get a “better” education. This is what the British think draws international students, but this is a patronizing assumption and not a reflection of reality for most. For me, the move was part quest for adventure and part practical desire to get my PhD completed quickly so that I could get on with a career.

Back in 2009 when I was looking for programs, I was warned that the average length for completing a history PhD in Canada was seven years, compared to only three or four in the U.K. My spouse had already put in the time to get a PhD in Canada and doing it again just was not attractive. We went abroad to get it over with.

This situation plays out around the world as students operate in a global education market. A Greek expat who also moved to the U.K. to do a PhD gave me similar reasons for his decision: Greek PhDs take six years and, in his case, a move abroad let him forego a compulsory year of military service. Greece, too, suffers from a brain drain. My wife and I left for England feeling firmly Canadian. At first, I worked away in the library and my wife, an academic engineer, began climbing the greasy pole of the British higher education system to pass the days until we could return home. As it happens, she discovered that the Canadian education system makes you an attractive candidate abroad. The warm and genuinely welcoming Canadian demeanour puts interview panels at ease, without seeming contrived or overbearing. Our broadbased education means that we have learned from a wide range of disciplines. This makes for flexible and naturally interdisciplinary scholars who stand out in a good way against those who have gone through the specialized British system, which emphasizes depth over breadth. In going abroad to acquire experience, we found that we had, in fact, imported valuable experience that is in short supply in the U.K.

Before we left Canada, only my father-in-law, himself an expat, foresaw the erosion that would take place as our ties to the country were stretched and Britain began to feel more like home. It started for us with that realization that the qualities that made us typical in Canada made us exceptional abroad. Then the experience goes something like this: after a lonely first year, new acquaintances slowly become friends. You meet many of them through higher education. This means that you share concerns about the state of research and teaching, and you bond while complaining of the latest ill-conceived policy of the British education secretary, or the home secretary’s new visa policies for international students. In time, you’re not sure what has changed in Canadian higher education since you left and you don’t know if Canada even has an education secretary. You know you could look it up but it doesn’t feel all that important.

Soon, six years have passed and you realize that you do not know how to be a Canadian academic

Meanwhile the years pass, and you begin to speak the secret language of a foreign education system. You learn the must-know buzzwords (“impact”, “outreach”, “the Research Excellence Framework”) and the answers to key questions British interview panels will ask. These are terms that may mean nothing or something else entirely to Canadian scholars. You have no idea because no one is there to tell you the Canadian buzzwords. You don’t even know what month of the year Canadian job advertisements are most likely to appear.

As a PhD student, you are given your first teaching experience overseas. You are introduced to a host of British scholars who can offer advice and feedback on your work, and who might drop a positive word on your behalf at the right moment. Your supervisor does not know any Canadian scholars and so neither do you.

As you near the end of your studies, your supervisor tells you about the “Junior Research Fellowships” at Oxford and Cambridge, and encourages you to apply because this is what most British PhD students do. You know about the short-term postdoctoral fellowships through Canada’s Social Sciences and Humanities Research Council and its Natural Sciences and Engineering Research Council, but no one here is really talking about them. And even if you got one, they require a move back to Canada. A move down the road to Oxford now seems less disruptive for a temporary post. Soon, six years have passed and you realize that you do not know how to be a Canadian academic.

It’s not like this for everyone. It is not unusual for some PhD students from low- or middle-income countries studying at British universities to have jobs waiting for them back home at universities where they were already teaching. This is part of an attempt by these countries to up-skill their professoriate. Although it would be entitled of me to suggest my wife and I deserve Canadian jobs over the other wonderful candidates out there, it would be equally entitled of Canada to assume those with Canadian passports will return home without job security.

None of these barriers to returning are insurmountable and we probably could have overcome most of them ourselves. We could have learned about the Canadian hiring season in the pages of University Affairs or elsewhere online. We could have forged connections with Canadian academics. We could have gotten our heads around what tenure involves. But we just didn’t need to – don’t need to. And the onus is not on us. My wife and I have academic jobs and a house and wonderful neighbours in Britain. We have left and we have found personal success. We would be expensive to woo back. Instead, Canada should become intent on preventing others like us from becoming part of the same accidental brain drain.

As in any long-distance relationship, communication is key. No one from back home is keeping in touch to encourage our return or to provide advice for how to do it. There is not even a government statistic, as far as I know, of which we are a part. Other than our family and friends, nobody even seems aware that we’ve left.

Ending the brain drain should be a priority for the federal minister of innovation, science and economic development

Canada has relied upon its supposedly self-evident and enduring allure to bring expats back. It has assumed that we would all long for hockey, poutine and fresh-fallen snow (and yes, sometimes we do). But we also fell unexpectedly in love with London, or Palo Alto, or Melbourne, or wherever we studied. Canada’s allure does not exist in a vacuum. Students abroad need to be regularly reminded of why they should return. And this should happen from the day they board their flights to leave because it is then that the romantic connection to Canada is strongest. A friendly and responsive avatar (if not a real face) that keeps in touch on social media, provides a quarterly newsletter of opportunities, facilitates a virtual community of scholars in similar situations and offers advice for making the transition back home would be an inexpensive but effective means of retaining ties with Canadians studying abroad.

Models for this already exist: scholarly societies provide this functionality for subject specialists, keeping scholars abreast of calls for papers, upcoming conferences and job opportunities, as well as tips for emerging scholars. There are scholarly societies for those who study Canada but, as far as I can tell, none for Canadian expats studying diverse fields.

Ending the brain drain should be a priority for the federal minister of innovation, science and economic development – the same portfolio responsible for SSHRC and NSERC. Although responsibility for education rests constitutionally with the provinces, the brain drain is a national problem and this federal office should take the initiative to keep expats in touch with Canadian higher education and keep those bonds strong. And not just for the select Commonwealth Scholarship and Trudeau Scholarship students, but for all Canadians doing PhDs or postdocs abroad. If university alumni-affairs departments can track us down on the other side of the world, so can the Canadian government.

Canada loses too many of its best and brightest. A few salaries spent on keeping in touch and enticing back those who left temporarily to study abroad is surely a good investment in Canada’s future.

Adam Crymble was born in Canada and currently lives in London. He is a lecturer of history at the University of Hertfordshire in England.

PUBLISHED BY
Adam Crymble
Missing author information
SEE SIMILAR STORIES
COMMENTS
University Affairs moderates all comments according to the following guidelines. If approved, comments generally appear within one business day. We may republish particularly insightful remarks in our print edition or elsewhere.