As she begins her second term, Mona Nemer weighs in on shaping the pandemic response, the battle against misinformation, and the push for open science.
BY BRIAN OWENS
SEP 22 2022 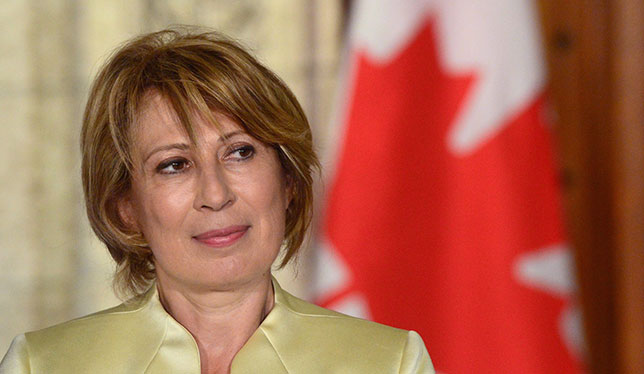 As she begins her second term, Mona Nemer weighs in on shaping the pandemic response, the battle against misinformation, and the push for open science.

Molecular cardiologist Mona Nemer was first appointed Canada’s chief science adviser in 2017, to provide advice to the federal government on scientific issues and science-based policy. Recently reappointed for two more years, she talks to University Affairs about her plans for her next term and the importance of open science, emergency preparedness, and support for young scientists.

Looking back on the last five years, what is your biggest accomplishment as chief scientist?

Well, to inject a little bit of humour, I think the biggest accomplishment is having survived for five years. But it’s not a long time and I had to put in place a new entity and define the job within a big system. I think that part at least we’ve managed well. We have the respect, the trust of government, both on the political side, but also the senior leadership of the public service. And importantly, the outside community. Putting in place a solid network of science advice across government is something that I think is going to be very significant in the coming years.

I would say that our work on the science integrity policy and the Roadmap for Open Science are also very important. The U.S. is putting in place a science integrity policy for their intramural science and it is greatly inspired by ours. The Roadmap for Open Science was a bit delayed because of the pandemic, but I think it’s now well accepted in government. And over the coming years it’s going to be one of our major priorities to make sure that at least federally funded science, wherever it happens in the country, is open.

The U.S. recently announced that all government-funded science will soon be immediately accessible. Is Canada going down the same path?

Absolutely. Open science was one of the four key items that was discussed at the latest G7 meeting of science ministers, where I had the privilege of representing Canada. In my bilateral talks with the U.S., we both agreed that open science is totally compatible with safeguarding and securing research. Here in Canada, we moved the yardstick in terms of the intramural science and now as part of the Canada Research Coordinating Committee, which the granting council presidents are a part of.

It’s definitely a priority for us and we’ve been working collaboratively with the U.S. and our other partners. The prime minister announced two years ago that Canada would join Horizon Europe [the EU’s research funding program] as an associate member. And that will require the research funded by Horizon Europe to be openly accessible. So, it’s an international movement and hopefully we will be able to speed up the deployment in Canada as well.

You have a young scientists advisory group. What were some of the things from that group that influenced your work?

They made us aware of the impact of the pandemic on young people who are studying, whose internships were interrupted, whose research was interrupted and I think it informed government actions. But also, there’ve been a lot of conversations and exchanges around things that matter a lot to them, such as the environment. They’ve been called upon by other organizations within government and outside government. They’ve written a memo for CIFAR [Canadian Institute for Advanced Research] on the next big ideas and questions. They’ve also been working on a science and research strategy for Canada from their perspective, and that hopefully will be released later in September.

They’ve seen firsthand how science can impact policy. So they have a better understanding of how governments work and where science and evidence can weigh in and in what form.

The biggest issue animating young scientists now is the campaign to increase funding for graduate students and postdocs. How important is it that young researchers get more support to do their work?

I’m very happy to say that I am fully on board with their demands. The role of graduate students and postdocs in the science ecosystem is not sufficiently appreciated. They’re the ones doing the work in the lab, making the discoveries. It’s just totally unacceptable for society not to make sure that they have proper compensation and proper living conditions, because they’re already making huge contributions to society. We have a problem if young people stop being interested in doing research – people don’t realize that research will significantly slow down, if not come to a stop. If we value science and knowledge and research as a society, we have to put our money where our mouth is.

What was the role of the office of the chief science adviser in shaping the response to the COVID-19 pandemic?

I had the good fortune to look into the role of the chief science adviser in national emergencies as soon as I took office. I looked mostly to the U.K., where they have a very well-established system for science advice during emergencies, called SAGE [Scientific Advisory Group for Emergencies]. And in fact, in the summer of 2019, we did a tabletop exercise with the U.K. and the U.S. to see how they do it and how well we were prepared, or not, for something like this.

Based on that exercise, I provided some recommendations to government and among them was to put in place a committee for science advice in emergencies. By the time that an emergency was upon us in early 2020, I decided to go ahead and put in place a multidisciplinary committee that would advise me, so that I could in turn advise government. It was a very different role from the public health agency because this health emergency very rapidly had an impact on many other areas of government, whether it was border control, the economy, transport, etc.

Were the prime minister and cabinet receptive to this advice, or did you have to proactively insert yourself into the discussions?

Well, I would say both. It’s my role to see a bit ahead and preparing the government for it. So I started out being proactive and then later we were asked to look into specific areas like vaccination and testing. More recently, the minister of health asked us to look into long COVID as well. This is why I say that I think we have developed trust and respect, and the government, by and large, has found our advice quite useful.

A big issue over the past few years has been the rise of scientific misinformation. How do you see your role in advocating for science-based policies, countering misinformation and building trust?

This is a complex issue but I would say that overall, the pandemic was helpful for us moving forward. Many more people became sensitized to science and wanted to hear more about science. There were a lot of scientists and clinicians on the main media channels speaking to the public, sometimes fielding questions directly from the public. We need to really build on this, because being proactive and developing trust with the public and enhancing the public understanding of the scientific method is very important for the public to be able to tell misinformation from the truth.

That’s not going to take care of everything, of course. We’re going to need more research in many areas, including sociology, psychology, community-based research to understand and be able to relate to the different groups who are falling prey to misinformation and disinformation.

But one thing is for sure: we need to double down on the dialogue with the public and appreciate that the solution is not going to be a one-size-fits-all. People absorb information for different reasons and from different places. This is why diversity in science is so important because you want people seeing people from their community, people who look like them, who are also speaking with them, so the trust factor is a lot greater. And it’s not only pandemics. We’ve seen it with climate change, we’ve seen it with the democratic process as well. This is something that’s going to need to be approached in a very serious and methodical manner.

What are your priorities for the next two years of this renewal, and why only two years?

Well, it’s very demanding. I’m happy to serve for the coming two years and make sure that there is an orderly transition, that the government has time to recruit my successor.

Two years is not a long time, but I believe that we can build on the momentum that we’ve started. It’s a priority for my office to make sure that we have a proper open science regime for the entire country, and then to support government efforts in reinforcing Canada’s emergency preparedness capacity. In the mandate letter of the minister of emergency preparedness it calls on the minister to work with the office of the chief science adviser to make sure that science and science advice are properly integrated in preparedness and response. I think this strengthening of the science advice to government, and strengthening the capacity within government to receive science advice, is a priority.

I’m very keen to continue working with, for example, our global affairs department to strengthen the presence of science in our international relations, showcasing the great science and innovation that happens in Canada whenever we can and using it as a tool for our international diplomacy. We see how countries are putting great emphasis on science, technology, and innovation. We see it with the U.K., we see it with the U.S., with China and so on. So we need to be present. We need to reinforce our system and showcase it nationally and internationally.

PUBLISHED BY
Brian Owens
Brian Owens is an award-winning science journalist and author based in New Brunswick.
SEE SIMILAR STORIES
COMMENTS
University Affairs moderates all comments according to the following guidelines. If approved, comments generally appear within one business day. We may republish particularly insightful remarks in our print edition or elsewhere.