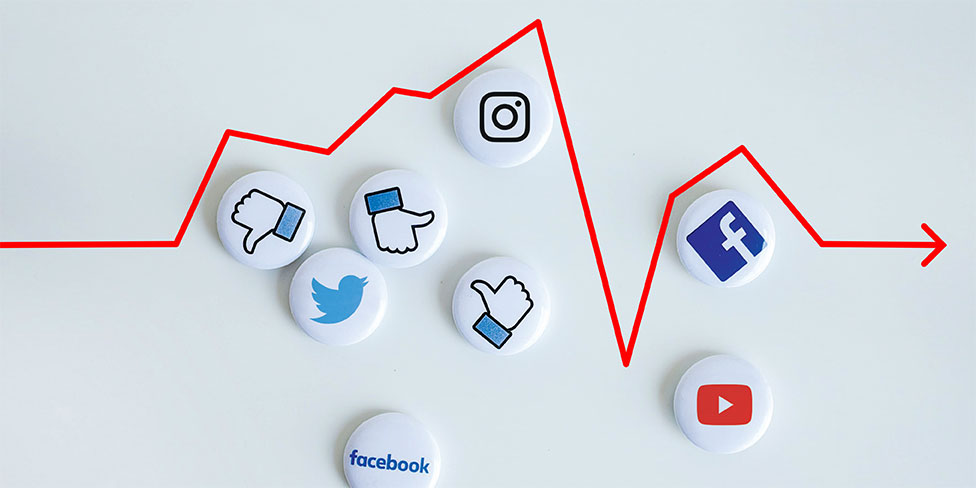 In the midst of the pandemic, academics are fighting a rising ‘infodemic’

As COVID-19 began to spread around the globe, so too did a toxic brew of rumours, misinformation and conspiracy theories.

It didn’t take long. As the coronavirus outbreak began to spread around the globe, so too did a toxic brew of rumours, misinformation and conspiracy theories. This rising tide of falsehoods and distortions has eroded public trust in institutions and led the World Health Organization to warn of an emerging “infodemic” that may be as dangerous as the virus itself.

Some of the conspiracy theories circulating today are spawned by malevolent forces, by individuals angling for political gain, or by governments seeking to hide their failures. But dubious claims are also spread by everyday people whose critical faculties have simply been overwhelmed by feelings of confusion and helplessness.

While these human reactions are alarming, they are not unique to the COVID-19 pandemic. “All the things we are seeing today – the anxiety, the panic buying, people disregarding medical advice, the conspiracy theories – these were all present in previous pandemics,” says Steven Taylor, a professor of psychiatry at the University of British Columbia, who in late 2019 published a book entitled The Psychology of Pandemics: Preparing for The Next Global Outbreak of Infectious Disease (Cambridge Scholars Publishing). “What’s different this time is social media,” notes Dr. Taylor. “It’s making everything happen bigger and faster.”

Not only is the level of connection between people and quantity of information greater than in previous pandemics, we are also seeing sensational claims by unreliable sources crowding out legitimate experts whose answers are rarely as tidy or emotionally reassuring.

“There is no doubt that social media is a huge part of the problem,” says Tim Caulfield, who holds the Canada Research Chair in Health Law and Policy, and is a professor of law, at the University of Alberta. Dr. Caulfield recently received a $380,000 grant from the Canadian Institutes of Health Research and Alberta Innovates to assess how misinformation around COVID-19 spreads through mainstream and social media, and search engines such as Google. He says his research team will analyze dominant themes and types of messages in circulation, and determine which are gaining traction “for better or worse.” 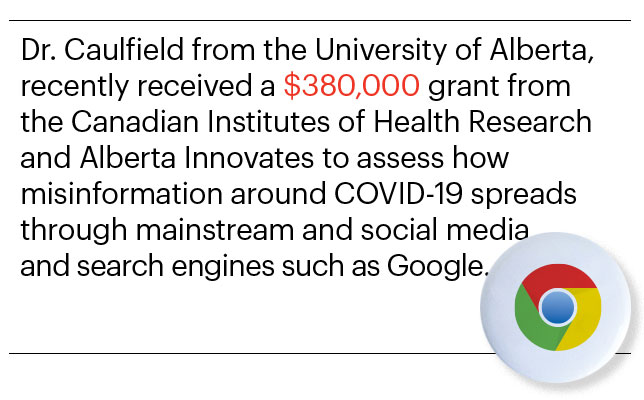 In a similar vein, researchers at the Social Media Lab at Ryerson University are spearheading an international effort in partnership with the World Health Organization to identify and document best practices of fact-checking organizations around the world to counter COVID-19 misinformation, particularly on social media. This builds on the work of the two lead researchers, Anatoliy Gruzd and Philip Mai, who have developed the COVID-19 Misinformation Portal featuring a range of resources to advise Canadians against false and misleading claims about the pandemic.

One of the most popular conspiracy theories circulating today focuses on 5G wireless technology, the newest, fastest type of cellular network which began deploying globally in 2019. Some people assert that 5G directly transmits the virus, while others insist that 5G radiation weakens people’s immune systems, making them more vulnerable to COVID-19.

Other often-repeated theories include the claim that the virus was accidentally released by the Wuhan Institute of Virology, or that it was designed as a biowarfare weapon, either by the Chinese or the Americans. Another bogus story claims that the pandemic is part of a plan by global figures such as Bill Gates or George Soros – in league with “Big Pharma” – to introduce mandatory worldwide vaccinations that would incorporate microchips to track people.

Maya Goldenberg, a professor at the University of Guelph who focuses on the philosophy of medicine and science, says that conspiracy theories take hold because they fulfill a psychological need. “The dangerous story is more comforting. It provides a narrative that is more coherent than what is popping up around us. There’s a lot of uncertainty around COVID.”

Dr. Caulfield agrees. Each of these wild claims seems to lend a senseless tragedy some degree of meaning, however dark. “As humans, we’re biologically wired to seek connections between things. It gives us an evolutionary advantage,” he says. “But in the case of this pandemic it may cause us to imagine connections where they don’t exist.”

Although the adherents of conspiracy theories come from all parts of the political spectrum, there is one constant: “The people who gravitate toward these theories tend to have a low level of trust in government agencies to protect them,” says Dr. Goldenberg.

The feelings of security and control offered by conspiracy theories may be illusory, but the damage to the public trust is all too real. “Once these theories are embedded, they are hard to eradicate,” says Dr. Caulfield, who notes that there is real danger involved in the propagation of these beliefs if some people act on them. The 5G conspiracy theory has led to the destruction of cell towers across Europe, while more than 700 people died in Iran after drinking industrial-grade methanol, a rumoured prevention for the virus. 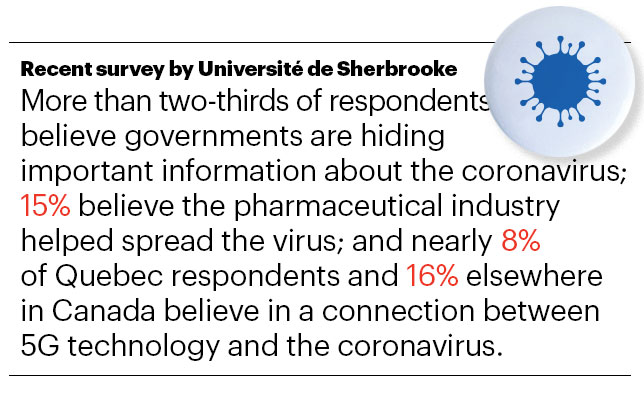 Canadians are not immune to this misinformation contagion. A recent survey by researchers at Université de Sherbrooke found that more than two-thirds of respondents believe governments are hiding important information about the coronavirus; 15 percent believe the pharmaceutical industry helped spread the virus; and nearly eight percent of Quebec respondents and 16 percent elsewhere in Canada believe in a connection between 5G technology and the coronavirus. (Several cases of arson against cell towers in Quebec are suspected of being linked to the 5G conspiracy.)

Similarly, a survey conducted by the school of journalism and communication at Carleton University revealed that 46 percent of Canadians believe at least one of four COVID-19 conspiracy theories and myths addressed in the survey. More than a quarter of respondents, for example, believe that the virus was engineered as a bioweapon in a Chinese lab.

Defying all logic, a segment of the populace in Canada and the U.S. continues to insist that the coronavirus is simply a hoax. It’s easier to harbour a belief like this today than in the past, says UBC’s Dr. Taylor. “In the 1918 Spanish flu pandemic there were coffins in houses and lined up in the streets. Today, we don’t see dead people. It’s much more abstract. It allows people to engage in cognitive distractions.”

The dynamics of social media may also exaggerate our gullible tendencies, as platforms like Facebook incentivize engagement before fact-finding. Gordon Pennycook, an assistant professor of psychology at the University of Regina and a leading researcher into the psychology of misinformation, has discovered that on social media, while people don’t always believe a story, they will still share it.

In one experiment, Dr. Pennycook asked participants to consider a mixture of true and false headlines about the coronavirus outbreak. When asked to judge the accuracy of the statements, the participants said the fake news was true about 25 percent of time. When they were asked whether they would share the headline, however, around 35 percent said they would pass on the fake news.

Perhaps the biggest obstacle to accurately filtering the flood of information coming at us online is our own biases. As Dr. Pennycook points out, we need to be self-reflective and understand that we are susceptible to false posts when they align with our own beliefs.

Dr. Pennycook suggests social media networks could nudge their users to be more discerning with relatively straightforward interventions. These include advertisements on social media sites that talk about accuracy or prompt users to think about whether what they’re sharing is bogus.

Psychologists note that fake news stories are designed to grab your attention by appealing to emotions like moral outrage. The purveyors of fake news can make their insidious messages more convincing using a few simple tricks. For example, the simple presence of an image alongside a statement is known to increase the perception of its accuracy. It’s also been established that the more often we see something in our news feed, the more likely we are to think that it’s true – even if we were originally skeptical. 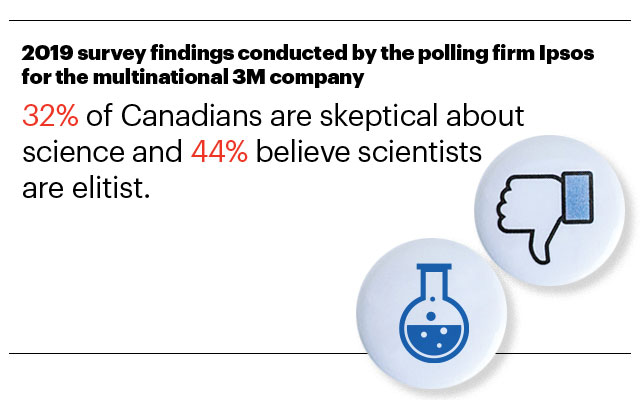 A lack of trust and skepticism of science

Dr. Caulfield contends that the current pandemic is bringing societal trends that already existed into sharp relief, such as a lack of trust in major institutions, political leaders and many sources of information. Faith in science may be another casualty of this growing fringe populism. A 2019 survey conducted by the polling firm Ipsos for the multinational 3M company revealed that 32 percent of Canadians are skeptical about science and 44 percent believe scientists are elitist.

“Many people today don’t understand that science is not a static body of knowledge, that it’s constantly evolving,” notes Dr. Caulfield. “People think that if scientists change their mind then they’re not to be believed.”

Dr. Caulfield’s research group plans to identify the misinformation that is circulating and then design and implement evidence-based solutions to combat the harmful discourse. The group also intends to develop recommendations for the media, the medical community, biomedical researchers and the public about how they can deal with the issue and be part of the solution.

Dr. Caulfield believes that scientists and public health experts must become more actively engaged in the public conversation about COVID-19 and push back on misinformation. It’s also something that he feels individuals should do in person or on social media, simply by trying to inject facts into discussions where rumour or conspiratorial thinking is rife.

“In the end, I hope we take away from this pandemic an understanding of the value of good science, of trusted institutions, and of the harm misinformation and pseudoscience can have on public discourse,” says Dr. Caulfield.