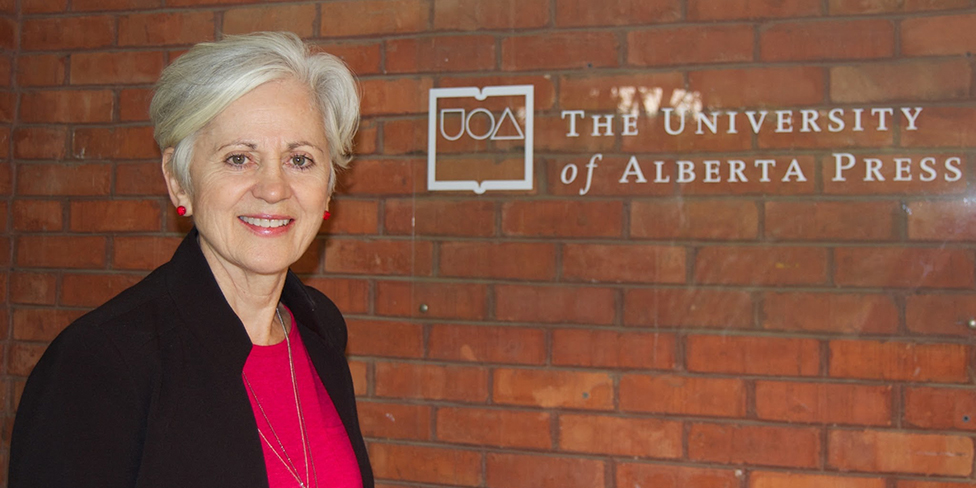 A look back on 16 years of changes in scholarly publishing

Linda Cameron reflects on the evolving world of scholarly publishing as she steps down as director of the University of Alberta Press.

Linda Cameron retired from the University of Alberta Press at the end of August after 16 years in the role of director. In her time at the press, Ms. Cameron ushered the press into the era of digital publishing; tightened links between the press and the university library that administers it; co-developed a for-credit practicum for PhD students in U of A’s faculty of humanities; and this summer co-hosted the inaugural Writing Stick conference on editing and publishing Indigenous stories in Canada.

Ms. Cameron is a past president of the Association of Canadian Publishers and prior to heading up U of A Press, she was headhunted from her role as director of University of Calgary Press to launch a press at the University of West Indies in Kingston, Jamaica.

University Affairs reached Ms. Cameron on the phone at her home in Edmonton earlier this month.

University Affairs: Jamaica to Edmonton, that’s quite the change. What interested you in the job to make that move to U of A Press back in 2001?

Linda Cameron: I’m a Saskatchewan girl so I knew what I was getting into in Edmonton. When I was being interviewed for the position in Edmonton, they sent me a big, thick file on something they had been working on, which was The Canadian Dictionary of ASL [American Sign Language]. This had been dropped by other publishers because it was a massive project. I read the file and I thought, “I really want to do this. It’s important and only a university press could do it at this stage.” That was my turning point to say yes. We published the dictionary, it was a massive undertaking – it has 8,000 drawings – and it has sold and sold and sold.

UA: It sounds like it was a career highlight for you at U of A Press. What are some others?

LC: When I joined the press, there was another project languishing in the basement because no one could afford to do it. It was the Atlas of Alberta Railways. We decided we still couldn’t afford to publish it, but we thought we’d make it our first foray into digital publishing as a live website. It’s still operational and gets referred to all the time.

Another book I’m proud of is People of the Lakes. Its author is the community of Vuntut Gwitchin First Nation in Old Crow, Yukon, with anthropologist Shirleen Smith. That was a very demanding project. How do you work with a community as an author? How do you draft a contract? What they were doing with this project was taking their oral history and putting it in a book, and that’s a big transition because every person might tell the story a little differently. How do you represent each of these voices with equal weight in one book? We had to listen closely to the community to figure that one out.

UA: People of the Lakes isn’t the only project the press was involved in that brought up challenges around Indigenous authorship and editing Indigenous literatures. You were also at the heart of the Writing Stick conference. How did that initiative get started?

LC: A few years ago, when the Truth and Reconciliation Commission released its calls to action, my boss at the time, Gerald Beasley, asked us what we’d do in response. I decided we should do a conference – without having any idea what I was talking about. In working with the press’s associate director, Cathie Crooks, and Kieran Leblanc, executive director of the Book Publishers Association of Alberta, we developed an opportunity for people to get together and talk about publishing Indigenous peoples’ stories – not just stories about residential schools, but stories that help us know each other.

We had about 240 registrants, 40 percent of whom were self-declared as Indigenous people. We had a great lineup of speakers including Richard Van Camp, Duncan McCue and Armand Garnet Ruffo, and we were lucky enough to be assisted by a number of Indigenous people on our team, especially the elders. That was a learning moment for me: how important it was to have elders involved throughout the entire process.

UA: What are some other ways that a university press can contribute to the project of reconciliation within their institution?

LC: There’s a lot of work to be done. It’s really important to train more Indigenous people in publishing. The capacity in Indigenous communities to work with publishers is very minimal, though Bruce Walsh, director at the University of Regina Press, is doing a very good job at this. We need more people who are Indigenous working as editors and working with publishers, and running their own publishing companies – there are a number of Indigenous publishing houses in Canada, but most don’t have much capacity and just a few people are doing everything, which must be very difficult. There’s an opportunity for university presses to partner with Indigenous publishing houses to use each one’s resources a little more broadly and do something bigger.

UA: Another area of publishing that has seen much change is the shift to digital publishing and marketing. In 2001, when you were starting your new job at the press, you were quoted in a news article saying that you were looking to “experiment with electronic publishing,” and in 2004, it was reported that U of A Press “leaped into cyberspace … by launching a virtual bookstore.” It was one of the first online stores for a Canadian university press. What was it like to be at the head of that transition?

LC: The shift to digital was kind of a two-pronged thing: first, getting the technology in place to do it and adjusting ourselves as publishing personnel to think about things in a different way. And then the authors, the source of everything we do, we had to get them on board.

One thing we had to do was go back to the authors in our backlist whose contracts didn’t mention digital rights and get permission to take that next step. Trying to get some of them to agree to let us make their materials digital, it didn’t always work. Even if we could demonstrate that their print book had sold as much as it would sell and going digital would give it a new audience and new life, some of them were just uncomfortable with that and they wouldn’t agree.

UA: In those early days, how did you sell academics on the idea of publishing a digital book?

LC: We were assuring them that their intellectual property would be protected, which was a bit naïve on our part. At that point, I don’t think we, or most people, understood that even with locks on things, once you put it out there on the internet, people can undo those locks. It was, and still is, a crapshoot if people will actually pay to use the book.

I think all information should be available to all people anytime, anywhere but that doesn’t mean it should be free. There are costs associated with making that information available. It’s fine to be a university professor pulling down a significant salary and opting to have your stuff “freely available” because you’re already getting paid. But there are lots of people who aren’t in that privileged position, some of whom are academics – sessionals and people on contract – who need that additional revenue, even though heaven knows it’s not usually that much money.

UA: And how has the academic author changed from those earlier days?

LC: When you got a manuscript from someone in the humanities and social sciences, it was generally pretty polished already – they knew how to write, they had good sentence structure and good grammar. I find that’s not quite as true now. I don’t want this to sound like everyone is now submitting substandard work or anything. I just think there’s now so much pressure on academics to be more than a teacher and researcher, but to also write all their grant applications, and do all their own reports, and sit on 16 committees. They have less time to perfect their craft of researching and writing.