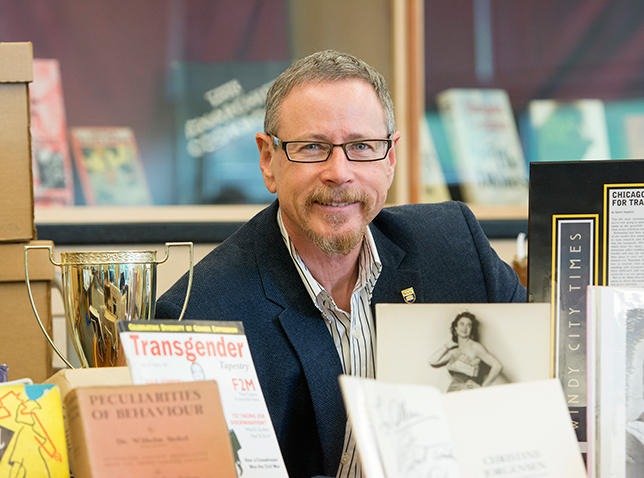 Aaron Devor’s work has made the University of Victoria a destination for transgender scholarship; he founded and hosts the annual Moving Trans History Forward conferences, and founded the university’s Transgender Archives – a vast collection of works focusing on transgender activism and research. And, as the chair of transgender studies at UVic, which he says is the first position of its kind in the world (and until the recent appointment of a chair at the University of Buenos Aires, it was the only position of its kind), Dr. Devor is shaping a comparatively new field of study.

Though work on and with transgender people and issues has been ongoing across disciplines for generations, it is only relatively recently that transgender subjects and authors have been placed at the epistemological centre. Rather than seeing transgender issues as a subfield, transgender studies draws techniques and insights from anthropology, sociology, literature, psychology, and geography to explain and explore how transgender people live, how we understand ourselves, and the cultural and political work we produce.

One could place the field’s inauguration at the 1997 publication of The International Journal of Transgenderism’s first issue. But it might be more accurate to read Transgender Studies Quarterly, which came out in 2014, as the beginning of a form of interdisciplinary scholarship less focused on transgender people’s medical-legal conditions, and more on their cultural and social worlds.

Some authors, like Dr. Devor, were active far before then. “I had been studying and working in the field of transgender studies before it had even been named ‘transgender studies,’” says Dr. Devor, whose interest in the area began in the 1980s as a master’s student in sociology. Over the past 30-odd years, his work has touched on various aspects of transgender activism and history. Dr. Devor’s work at the University of Victoria drew the interest of a significant donor, whose $1-million investment established the university’s transgender studies chair in 2016 and will support it for five subsequent years.

The Transgender Archives were announced at the World Professional Association for Transgender Healthcare in the fall of 2011, some four years after the university had obtained several large collections of archival materials from Dr. Devor’s connections. Another collection, from the University of Ulster, arrived in 2013. But most of the materials in the archive have been donated by activists and researchers Dr. Devor contacted personally – including founding contributions from Rikki Swin, and material from the family of Reed Erickson, a transgender philanthropist whose work was the subject of Dr. Devor’s historical biographical research for several years.

“I have had a long history in this community, and what has been donated to us has largely been donated to us by me approaching people who I know and asking them,” says Dr. Devor. “A lot of the people that I approach are activists – people who have been there, doing the work, for many decades. Some of the people I’m talking to have been doing this work since the 1970s. That’s been one of my key focuses.”

This focus on activist histories is part of what makes the Transgender Archives such a unique project. Often, the images of transgender people that emerge from archival materials frame them as objects of study, curiosities, arrestees or medical patients in the eyes of outsiders. The Transgender Archives do feature research of this kind. But many of the donated materials secured through Dr. Devor’s connections and legwork come directly from transgender people and organizations.

Of course, all archives have their gaps. When dealing with transgender history in particular, social factors like class, race and ability all come into play and shape who has the resources to record, preserve and donate materials over a period of time. “A lot of activist history is also simply not recorded,” Dr. Devor notes, “because many activists have lacked the resources to preserve it.”

Still, the professor is taking steps to fill these gaps. A recent influx of funding from the Social Sciences and Humanities Research Council has allowed him to pursue an oral history project that would collect testimonies of transgender elders who may not have the resources to do this kind of recording themselves. “That’s one of the challenges of the work we do,” says Dr. Devor, “to try and not leave anyone behind and to move things forward for everyone.”

PUBLISHED BY
Alex V. Green
Alex Verman is a writer and critic. They are an MA student in the department of Political Science and the Centre for Diaspora and Transnational Studies at the University of Toronto.
SEE SIMILAR STORIES
COMMENTS
University Affairs moderates all comments according to the following guidelines. If approved, comments generally appear within one business day. We may republish particularly insightful remarks in our print edition or elsewhere.