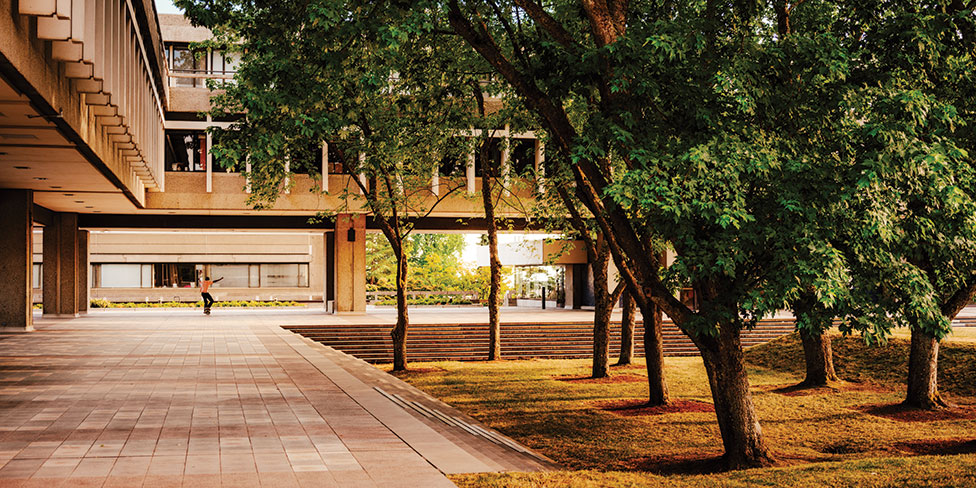 Quads: the heartbeat of campus

A look at some of the beautiful central gathering places at Canadian universities.

Quads are the heartbeat of campus, a central gathering space usually anchored by an institution’s major buildings. They also contribute a major part of the character and identity of a campus and university.

Usually shaped as rectangles, anything can happen on the well-maintained areas, typically located at the centre of campus. Students, staff and faculty can meet there to attend an orientation barbecue or a raucous concert, participate in a protest, catch a frisbee or just sit and relax between classes or meetings. And as Canadian universities increasingly acknowledge Indigenous history and treaties, quads are also taking on new ceremonies. Initially inspired by ancient monasteries, university quadrangles have evolved into utilitarian spaces. In the precarious medieval world, English universities were protective castles for orderly learning. The spaces were eventually adopted in North America during the early days of post-Enlightenment, then proliferated across the globe with the rise of modern science and the advancement of education.

Here are some notable Canadian university quads and a glimpse of what takes place there. 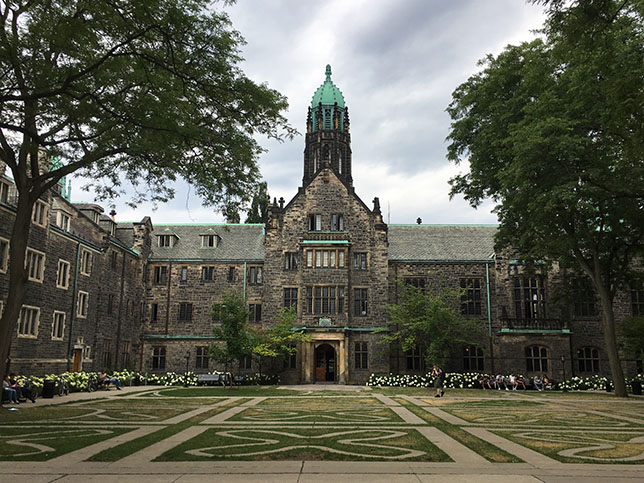 The Trinity College quad at University of Toronto. Photo by Dora Dalberto/Unsplash.

The university of Toronto’s St. George’s campus is an ancient respite in the heart of Canada’s biggest metropolis. Built while Canada was a British colony, the university’s massive stone edifices are imposing presences belying the peaceful squares hidden a few steps away.

The heart of the Trinity College Quadrangle, for instance, features an elaborate medieval knot on the ground. It might appear at least as old as the royal portraits from around the Second World War, but it’s only been there for a little more than a decade. In the 1950s, the quadrangle became home to a large summer Shakespeare festival and drama school. The tradition was later revived, and each fall, the Trinity College Dramatic Society student club performs works of the immortal bard.

Another picturesque quad can be found at the nearby University College, an imposing Romanesque-revival building so monumental it’s been a national historic site for half a century, and elsewhere deemed a visual encapsulation of the university’s “Oxbridge-lust.” 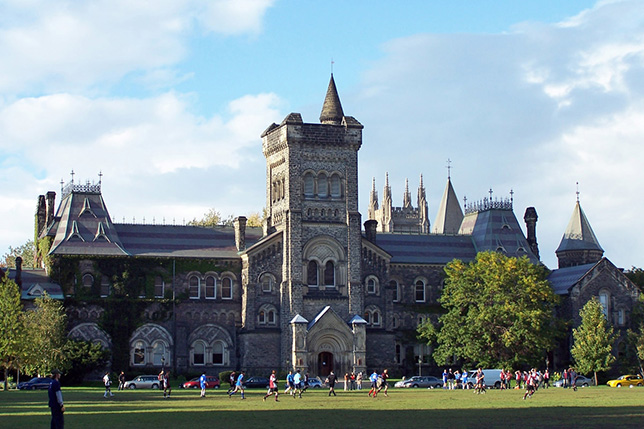 The University College at U of T. Photo courtesy of Wikipedia.

Currently closed for a renovation to revive the outdoor areas around the building, the UC quad is home to one of the campus’ oldest legends, built around a love triangle involving a diminutive Corinthian stonemason named Paul Diabolos and a hotblooded Russian rival, Ivan Reznikoff.

After a jealous Reznikoff instigated a deadly axe fight and was bested by his counterpart’s dagger, Diabolos hid his rival’s body, which was later found after a fire in 1890. Reznikoff’s bones are said to have been buried in the northeast corner, while his ghost apparently makes sporadic appearances in the college. However, a Toronto Star exploration of the story splashes cold water on the legend, suggesting it may be just one more bit of drama. 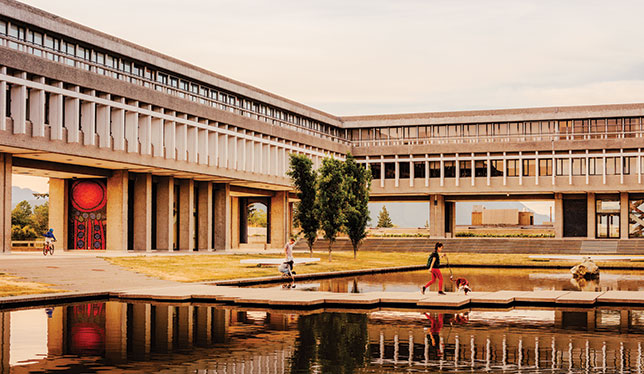 You may have never visited Simon Fraser University’s campus, but you’ve likely seen its distinctive quad high atop Burnaby Mountain, the centrepiece of which is marked by a long reflecting pool bisected by a walkway of concrete slabs.

Forever linked to famous Vancouver architect Arthur Erickson, SFU’s Academic Quadrangle pays homage to the Acropolis of Athens and the Meso-American city of Monte Alban. The quad’s angular features are at the same time so striking and versatile that the area itself has become a blockbuster talent.

When Vancouver became Hollywood North, the quadrangle hosted famous actors such as Will Smith and Arnold Schwarzenegger. In films like I, Robot, The Sixth Day and Agent Cody Banks, it’s a symbol of corporate and military might. In the X-Files, it’s FBI headquarters. And in the Battlestar Galactica reboot, it’s the Riverwalk Market in the doomed city of Caprica, right before nuclear hellfire rains down and sets the story in motion.

According to engineering reports, the Academic Quadrangle may actually be in danger of real-life catastrophe. In 2017, a report found that the concrete foundations would be especially vulnerable if a major earthquake rocked the campus.

While unlikely to happen soon, the prospect adds a little gravitas to a game of hackysack. 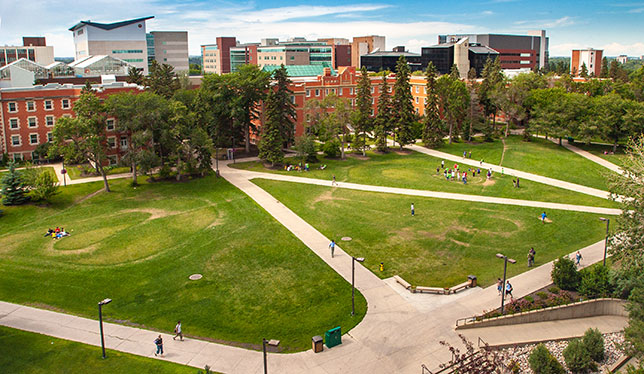 The main quad at the University of Alberta. Photo courtesy of the U of A.

Green and gold and giant pumpkins

A stone’s throw from the southern side of Edmonton’s iconic river valley, the University of Alberta’s main quad is an emblem of scrappy Prairie survival. The quad still resembles the 1920s masterplan sketch for Alberta’s postsecondary utopia. The plan was for a heavenly city accented on its west end by a trio of red Collegiate Gothic buildings, built the previous decade as residences.

Even before the quad was built, an election and change of government scuttled grander plans for the campus, and for a few years, a no-frills approach prevented the construction of fire escapes. Later commandeered by the Royal Canadian Air Force in the Second World War and nearly demolished in the 1970s, the three residences were eventually repurposed as academic buildings.

The U of A is proud of its green and gold. These fall colours are worn by sports teams and autumn trees alike around the time of the first midterms. Yet few students know the campus’s leafy finery exists because of a former landscape architect who spent decades terraforming the campus with exotic and unusual trees capable of surviving harsh winters. If you’re lucky, at the south end of the quad, you might see one of the enormous Dahurian birches shed ornamental curling sheets of bark.

Every fall, the university celebrates its alumni with games, concerts, food trucks and family-friendly events. But in other years, the main quad makes the news for its protests. In 2008, a 100-foot crane dropped a 500-pound pumpkin as part of a rally to end hunger. 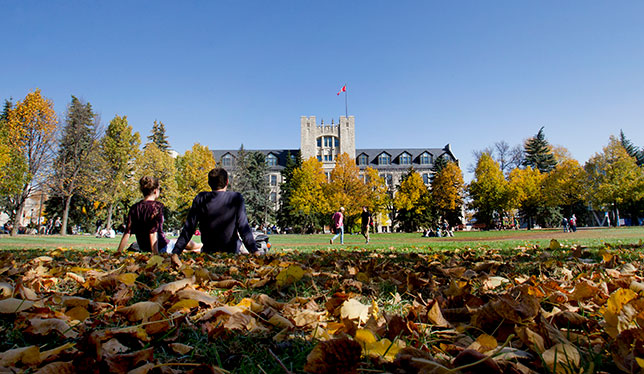 Duckworth Quadrangle at the University of Manitoba. Photo courtesy of the U of M.

If you’re looking to embrace your winter spirit, there are far worse destinations than Winnipeg, and far worse places in the heart of Canada than the University of Manitoba’s Duckworth Quadrangle.

The Fort Garry campus fixture takes its name from Henry Duckworth, a distinguished alumnus who returned to Winnipeg as a physics professor and chancellor before retiring in 1992. Its distinctive ring shape is surrounded by a brick and treelined pathway, lending it “grandeur, openness, and purity,” according to the university’s most recent master plan. If that sounds just a little too perfect, Duckworth Quadrangle topped a jokey Reddit forum a year later asking for the “best place to have sex on campus.”

For years, the university flooded the quad in winter to create an impromptu skating rink over the winter months that was used in 2012 to test out Jennifer, a hockey-playing robot capable of stick handling. In other years, it’s been the site of snowshoe races or an ice bath competition for charity. 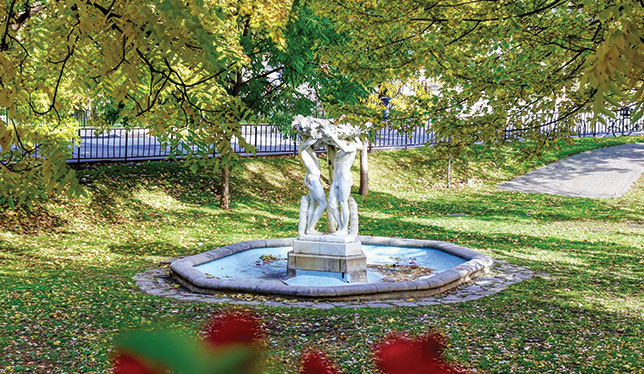 Central Quadrangle and the Three Bares

McGill University’s biggest green space is probably the 650-hectare Macdonald Campus, a massive chunk of land on the island of Montreal. But the university’s downtown campus, a collection of century-old limestone and copper roofs near the slopes of Mount Royal, is similarly picturesque.

McGill’s central quadrangle came into shape a little over a century ago, surrounded by buildings donated by Montreal’s wealthiest benefactors. There is a perfect gathering spot on the slope leading up to a cluster of buildings named after a 19th century sugar baron, Peter Redpath, or a notorious shallow octagonal fountain in a dell looking up towards the iconic Arts Building.

Unveiled in 1931, the Three Bares is the creation of one of the scions of the Cornelius Vanderbilt fortune. It depicts three men hoisting a bowl, clothed in little more than a few yard clippings. Faith Wallis, a medieval history professor who researched the sculpture, has deemed the lads “a rather dubious piece of kitsch.” Nevertheless, it has become one of the most celebrated pieces of art at one of the world’s most famous universities, as well as the silent witness to hazy concerts and beer-soaked Frosh weeks. 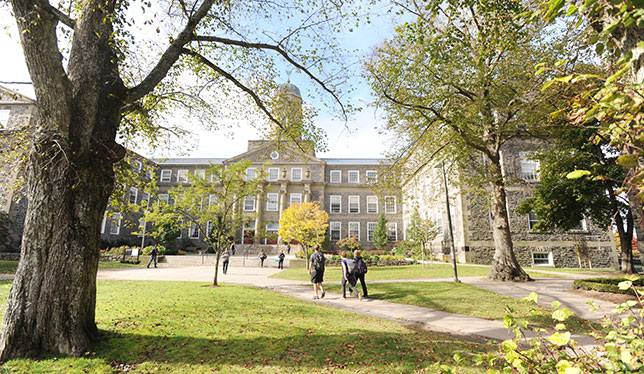 The Studley Quad at Dalhousie University. Photo courtesy of Dalhousie.

Studley Quad and an evolving future

Studley Quad sounds a bit like a braggadocious freshman, but its history goes back and far away. Dalhousie University’s main Halifax campus was named after Studley Priory, a former Benedictine convent in Oxfordshire belonging to Alexander Croke. The vice admiralty judge named his Nova Scotian property in its honour, eventually returning to his home estate in England. After he died, the property changed hands a number of times before being purchased by the university in 1911.

A century later, the Studley Quad is now the public gateway for the university, stretching across the campus and uniting century-old buildings with more recent additions. When Dalhousie celebrated its bicentennial in 2018, it redeveloped a portion of Studley Quad, adding flexible seating and a new ceremonial circle for cultural activities.

It’s a blending of new and old, hosting events that Mr. Croke probably could never have imagined: bike rodeos and scavenger hunts, the Halifax Colour Festival and an annual event called Mawio’mi that recognizes and celebrates the Mi’kmaq people.

Today, the Studley Quad is a place for students to shape their lives. In spring 2021, students camped out in the quad near the Henry Hicks Academic Building to protest what they see as a threat to their futures: consecutive tuition hikes.

PUBLISHED BY
Brent Wittmeier
Brent Wittmeier is an Edmonton-based writer.
SEE SIMILAR STORIES
COMMENTS
University Affairs moderates all comments according to the following guidelines. If approved, comments generally appear within one business day. We may republish particularly insightful remarks in our print edition or elsewhere.