Christian Messier is on a crusade to increase biodiversity in urban and natural forests.
BY SAMUEL SAUVAGEAU-AUDET
AUG 24 2022 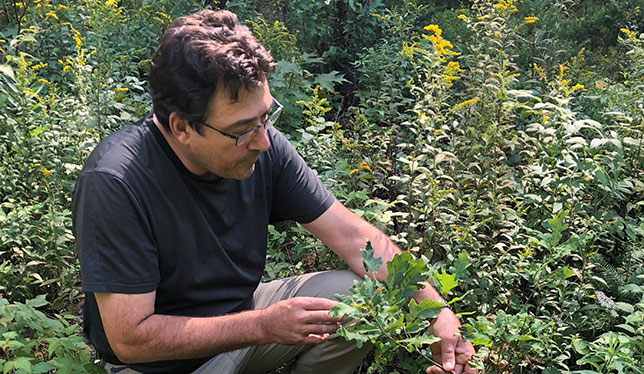 Christian Messier is on a crusade to increase biodiversity in urban and natural forests.

At a young age, Christian Messier fell under the forest’s spell. Today, he is a forest ecology professor at Université du Québec à Montréal (UQAM) and Université du Québec en Outaouais (UQO), and his passion for natural environments continues to grow. His research is focused on forest resilience in response to “global changes,” a term he uses to encompass climate disruption and other natural and human-made hazards, such as the fragmentation of forests for real estate development that disrupts nature’s connectivity and, by extension, its resilience.

Dr. Messier’s current research started when he co-authored a book in 2009, A Critique of Silviculture: Managing for Complexity. “Forestry has always been used to simplify forests and has also been used to control our actions in these natural environments. In this book, we argued that we should be diversifying forests, since it is through this diversity that a more resilient system can emerge,” he explains. The book quickly became a bestseller and continues to be used in more than 50 forestry faculties around the world.

The book was based on a range of research projects initiated by Dr. Messier. These launched him on a crusade to convince the forestry industry to plant more diverse forests in both natural environments and cities. Doing so “improves production and resilience against drought, disease and insects,” he adds.

“We should be diversifying forests, since it is through this diversity that a more resilient system can emerge.”

Dr. Messier’s work has had an impact not only in Quebec, but around the world. One example is triad forest management, which he developed in Quebec after a long stay in Finland for his postdoctoral fellowship. He says the triad approach consists of expanding protected areas and more natural and ecological logging practices, while compensating for the resulting lost wood production with intensive plantation management over a smaller proportion of the total area.

“The project has been very successful,” says Dr. Messier. “It even inspired a new functional zoning law in Quebec in 2013. An international research network is in the process of being established. More and more researchers are interested in the triad approach.”

Soon after his return to Quebec, Dr. Messier heeded the call of the Panamanian rainforest: “To people interested in forests and trees, visiting a tropical rainforest is like being a kid in a candy store.” In Panama, he found many sources of inspiration, including an incredible diversity and variety of species and their “extraordinary” adaptations.

“At that moment, I asked myself: what affects tree growth and how important is tree species diversity to the forest ecosystem?” he says.

Like his research community, Dr. Messier has turned his interest to urban forestry. His research was pulled in that direction about 15 years ago when he received a “large grant” to oversee a new research chair in urban and peri-urban forestry. “In the past 15 years, there has been an explosion of interest in urban forestry and ecology. Many of my colleagues are now involved in this field of research. I think I probably contributed somewhat to its popularity, because people saw that it was possible to do interesting research in the city.”

To address the fragility of urban monocultures, he collaborated with a former postdoctoral student who became a colleague at UQAM to define the functional traits of more than 200 tree species found in Montreal. “Now, each time trees are planted in parks or along streets, they are selected from these major functional groups to increase biodiversity. This protects the urban forest because no matter what disturbance the future brings, not all species will be affected in the same way,” Dr. Messier explains.

“In the past 15 years, there has been an explosion of interest in urban forestry and ecology. Many of my colleagues are now involved in this field of research. I think I probably contributed somewhat to its popularity, because people saw that it was possible to do interesting research in the city.”

With his time divided between the universities in Montreal and Gatineau, Dr. Messier feels he has the best of both worlds. “At UQAM, my focus is mostly on urban forestry, while at UQO, it is mostly research in natural forests.”

Travelling between the two institutions and internationally, he has met many people – students and researchers alike – who share his passion for forests. In addition to inspiring his scientific community, Dr. Messier leaves a lasting impact on everyone who crosses his path. One such person is Isabelle Laforest-Lapointe, a former PhD student who is now an assistant professor in the biology department at Université de Sherbrooke. Above all, she finds Dr. Messier to be “compassionate, friendly and welcoming.” Along with being a top scientist in his field, he has a “sixth sense” when it comes to understanding political and economic systems, which makes him an excellent intermediary between “science users” and “science practitioners,” says Dr. Laforest-Lapointe.

The feeling is mutual. “I’ve always said that all of this was possible only because in my career, I have been fortunate to have extraordinary students with brilliant and highly successful ideas,” says Dr. Messier.

PUBLISHED BY
Samuel Sauvageau-Audet
Samuel Sauvageau-Audet is a freelance francophone journalist.
SEE SIMILAR STORIES
COMMENTS
University Affairs moderates all comments according to the following guidelines. If approved, comments generally appear within one business day. We may republish particularly insightful remarks in our print edition or elsewhere.