Universities across the country are reassessing historical figures and renaming the buildings that commemorated them.
BY LAURA BEAULNE-STUEBING
JUL 06 2021 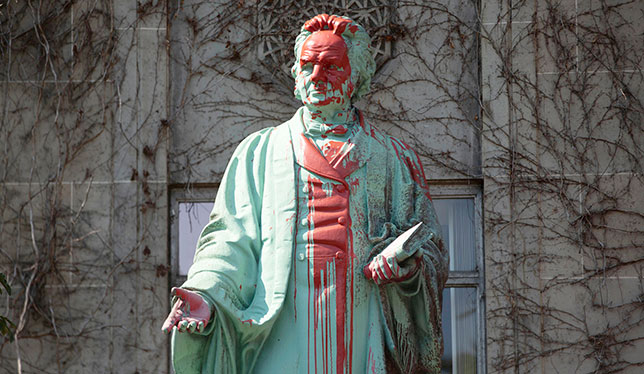 Universities across the country are reassessing historical figures and renaming the buildings that commemorated them.

When Eva Jewell taught her first lecture at Ryerson University in 2019, she was nervous. Burdened by imposter syndrome, she was worried about the prospect of standing in front of a class of some 100 students. To counter those feelings, the sociology professor from Deshkan Ziibiing (Chippewas of the Thames First Nation) in southwestern Ontario thought about where she comes from. “I know this material,” she told herself. “I’ve experienced it, I’ve lived it, I’ve grown up in it. And who better to stand in front of these young Canadians and teach them about [settler colonialism] than somebody who knows [its consequences] deeply?”

She left that first lecture and headed back to her office. On the way, Dr. Jewell walked past the statue of Egerton Ryerson, the university’s namesake for his contributions to education. Feeling overwhelmed and with tears in her eyes, she thought about her presence there, on that campus. “I come from people who survived his system, and here I am teaching the horrors of his schools to students at a university that is named for him,” she said.

Along with playing a prominent role in establishing public schooling in Canada, Egerton Ryerson is also considered a principal architect of the Indian Residential School System. There have been calls for the university to change its name for years, which have recently grown louder. Dr. Jewell is among the many Indigenous members of the Ryerson community calling on the university to no longer honour a man who represents the pain they and their families have felt for many years – a man who, to them, represents genocide.

As more Canadians are learning the truth about residential schools and the harms caused by colonialism, many are asking if these are the figures we want to honour and commemorate with statues, names on buildings and universities?

With the news of 215 unmarked children’s graves at the site of the former Kamloops Indian Residential School in May and 751 unmarked graves at the Marieval Residential School in Saskatchewan a month later, and the expectation of finding additional graves at other school sites across the country, the calls for individuals and institutions, like universities, to reevaluate Canada’s past and reconsider how we treat historical figures such as Egerton Ryerson and Sir John A. Macdonald, are growing louder. As more Canadians are learning the truth about residential schools and the harms caused by colonialism, many are asking if these are the figures we want to honour and commemorate with statues, names on buildings and universities?

What’s in a name?

That’s a question the Standing Strong (Mash Koh Wee Kah Pooh Win) Task Force, struck by Ryerson’s president Mohamed Lachemi in November 2020, has been contemplating. The task force, co-chaired by the university’s senior advisor for Indigenous relations and reconciliation Joanne Dallaire and history professor Catherine Ellis, has been mandated to conduct broad consultations to gather feedback about “what the university can do to reconcile the history of Egerton Ryerson.”

For hundreds of professors and students – both Indigenous and non-Indigenous – it’s clear what the university needs to do.

Since early June, more than 300 staff and faculty members at Ryerson signed an open letter in support of removing the statue and changing the university’s name. Indigenous students also penned an open letter to the Ryerson community, expressing worries that the task force won’t lead to significant action. Professors and students have replaced “Ryerson University” with “X University” in email signatures and public-facing profiles as part of their efforts to press for change. “Historically, Indigenous people have signed with an ‘X’ under conditions that do not fully recognize or honour Indigenous lives,” wrote Anne Spice, an assistant professor of Indigenous environmental knowledges at Ryerson and a Tlingit member of Kwanlin Dün First Nation. “It is a sign of assent under duress.”

In many places in the country, universities are reconsidering the legacy of the country’s first prime minister. Last October, the board of trustees at Queen’s University voted to remove the Sir John A. Macdonald name from its law school building after reassessing his treatment of Indigenous peoples and racialized communities. In June 2021, the University of Windsor renamed the student residence Macdonald Hall to Residence Hall West, to foster “an inclusive and welcoming environment.” In the same vein, the University of New Brunswick’s board of governors voted to remove the name of its law faculty building. The building was named after George Duncan Ludlow, the province’s first chief justice who had connections to slavery and the mistreatment of Indigenous peoples. Carleton University is also renaming a building named after Gordon Robertson, a former clerk of the Privy Council who played a role in in the High Arctic relocation program that moved Inuit families 1,200 kilometres from their homes to Grise Ford and Resolute, Nunavut in the 1950s.

But not everyone approves of making these kinds of changes – they say removing the names erases history and destroys the reputations of the important, well-meaning men who created the Canada we know today.

Sean Carleton, a history professor at the University of Manitoba, admits it can be difficult to look at the back-and-forth arguments about the legacies of these men and know what position to take in the “to rename or not rename” debate. The current public conversation doesn’t acknowledge that history can have different interpretations, Dr. Carleton said. “When you learn about history as a series of dates to memorize and that there is truth with a capital T, it then makes it very difficult to confront the reality that history is more complicated. It’s really about interpretation and perspective.”

In his history classes, Dr. Carleton talks about Sir John A. Macdonald as a complicated figure. He says it’s possible that the country’s first prime minister was two things at once: a father of Confederation, who helped resolve or quell English and French tension and built a railway to create a country, but “in order to do those things, he was also Canada’s colonial quarterback.” To be a nation builder, Dr. Carleton said, Macdonald had to also be a nation destroyer.

“Canadians can handle complicated conversations about our past and about the figures in it.”

To Dr. Carleton, the history lessons we’re taught in school don’t paint a complete picture. “A lot of Canadians learn about the past … in elementary and high school, in ways that are really wrapped up in civic engagement,” he said. “That kind of education certainly has its purpose, but it is often wrapped up in myths and national beliefs that can be quite harmful [because] they don’t prepare future citizens to really understand the more complicated nature of how a country like Canada works.”

Canadian universities have also played a part in this myth-making process, producing early generation historians who, from the 1930s to the 1960s, wrote historical works “that perpetuated a lot of the … mythologizing about Canadian history.” But coming to understand the nuances of the past will better prepare Canadians to truly be civically engaged and create the best society possible, Dr. Carleton added. “I feel like Canadians can handle complicated conversations about our past and about the figures in it.”

Canada at a turning point

Egerton Ryerson’s statue no longer stands on the university’s campus in the heart of Toronto. In early June, the monument – which had been splattered and marked with red paint – was brought down by demonstrators. In a statement, Ryerson president Dr. Lachemi said that “the statue will not be restored or replaced.” The Standing Strong task force also acknowledged the sense of urgency surrounding its work. In an email, the task force said it has received extensive feedback in its call for input: over 6,000 survey responses, more than 50 report-backs and many open letters, including the petitions from faculty and staff. Its members are reviewing all these items as they “examine and understand the legacy of the university’s namesake and consider the principles to guide future commemoration-based decisions by the university.” According to Karen Benner, associate director of communications at the university, the task force is committed to presenting its final report before the fall semester, earlier than its previously planned fall delivery. She added that, while the task force is trying to move more quickly, it is taking time to “review and reflect all that has been shared with them from the community.”

In the eyes of Dr. Jewell, Canada is at a turning point. She and her colleague, historian Ian Mosby, have been tracking the calls to action from the Truth and Reconciliation Commission as they’re achieved. “We found that the pace on reconciliation and completing the calls to action has been glacial,” she said. But in the two weeks following the news from Kamloops, four calls to action were completed. “There were very clear reasons why there wasn’t any movement [in the past], and one of them was the lack of political will. So now we are seeing the incredible uptake of political will to actually … act.”

We’re at the truth part of truth and reconciliation, Dr. Jewell added. “I think Canadians are coming to a reckoning … with the fact that their country is not as benevolent or peaceful as they thought it was,” she explained. “Canadians need to focus maybe not so much on reconciliation, but to address the truth [of the country and of what will be found] over the next several years, because this is just the beginning.”