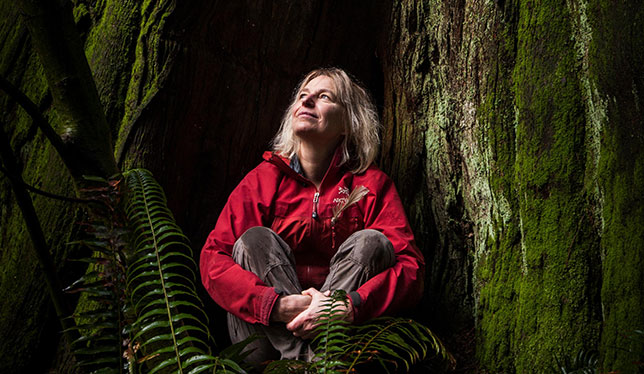 In the late 1990s, while pursuing her PhD in forestry, Suzanne Simard began to develop some radical ideas that clashed with established beliefs about how forests function. According to veteran foresters, trees were isolated loners engaged in a cutthroat competition for water, sunlight and nutrients, with the winners shading out the losers and sucking them dry, a Darwinian perspective that had guided silviculture strategies and timber industry practices for decades.

Having spent time researching the most effective methods of growing trees with logging firms and the British Columbia government, the forest ecologist came to doubt the wisdom of the prevailing “plantation model,” which saw companies plant orderly rows of fast-growing, cash-worthy species and chop down and kill everything else around the preferred trees with herbicides.

She felt this approach ignored the genius of nature’s design and she set out to learn why old-growth forests were so powerful. In a series of landmark experiments performed while dodging grizzly bears in B.C.’s verdant interior, she discovered that trees are connected to one another through vast and complex underground fungal root systems known as mycorrhizal networks. Via this subterranean pipeline trees share carbon, water and nutrients with other trees, including other species, and are also able to transmit information. It is a symbiotic relationship. From the tree roots, the fungi extract sugars that they use for fuel, but can’t produce on their own. In return they ferry water and nutrients drawn from deep in the soil from tree to tree. 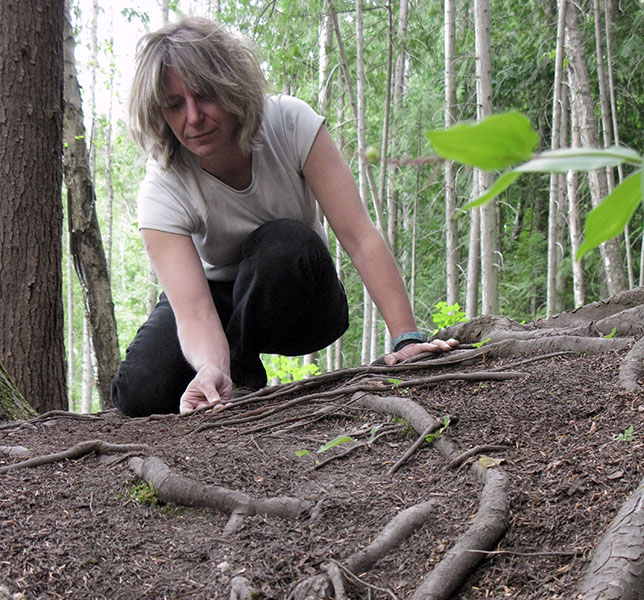 Dr. Simard published her findings in the prestigious journal Nature in 1997. Entitled “The Wood Wide Web,” the article created a stir, generating enthusiasm but also provoking sharp blowback. One reviewer described her paper as “a dog’s breakfast.”

“A few well-established researchers did everything in their power to trash my work,” says Dr. Simard on the phone from Vancouver, where she is now a professor in forest ecology at the University of British Columbia. “As a young researcher, you can get hurt easily by that sort of thing. It slowed down my science. When your work is regarded as controversial it’s harder to get grants, harder to find funding, harder to get money for talks. At one point I was ready to give it all up.”

But Dr. Simard persisted, pioneering cutting-edge investigations into how these fungal filigrees help trees relay distress signals about drought and disease, search for offspring, and transfer nutrients to neighboring plants before they die, an elaborate system that she compares to neural networks in human brains.

Using DNA microsatellites, Dr. Simard also helped identify “mother trees” — the largest trees in forests that act as central hubs for the mycorrhizal networks. These trees support seedlings by infecting them with fungi and sending them the nutrients they need to grow.

“The underlying message is that we are all in this together. That we are all one. We depend on one another and we have to love our plants.”

It took a decade, but her concepts took root. Other scientists began expanding on Dr. Simard’s efforts and her ideas percolated into popular culture. Her insights were featured in the 2009 film Avatar, in which tree roots are linked to the souls of an alien race through a “biological neural network.” She was a driving force behind Peter Wohlleben’s 2015 best-seller The Hidden Life of Trees: What They Feel, How They Communicate, and she served as the model for Patricia Westerford, a scientist obsessed with tree communication, in Richard Powers 2018 Pulitzer Prize-winning novel The Overstory, which depicts a desperate bid to save the last surviving acres of virgin forest in North America.

Recently, Dr. Simard has become something of a cultural icon through her illuminating and inspiring TED talks, which have attracted millions of views on YouTube. Her fame is sure to grow even further this spring when her first book, Finding the Mother Tree: Discovering the Wisdom of the Forest, is published.

In addition to her book, Dr. Simard is forging ahead with The Mother Tree Project, a massive endeavour being conducted at nine different regions in B.C. that she says “will last 100 years.” The venture’s main goal is finding more ecologically sound methods of harvesting trees, but other areas of inquiry include gaining a better understanding of the resilience of forests to human and natural disturbances and climate change.

Dr. Simard believes that the violent destruction of tree networks through clearcut logging may spell doom for the future of the forest as a whole. Mother trees share their information and nutrients before they die natural deaths. However, if chopped down, all this knowledge is lost.

Remarkably, despite her impressive credentials, Dr. Simard still has detractors, fellow scientists offended by any suggestion of the possibility of intelligence or sentience attached to trees. But those criticisms are more than made up for by the overwhelmingly positive response she has received from the public. Dr. Simard believes that her work resonates with people because it confirms what they instinctively feel – a spiritual connection the forest. “The underlying message is that we are all in this together. That we are all one. We depend on one another and we have to love our plants.”