An expert on leadership in higher education explores the reasons women are less likely to be appointed president, and why so many have unfinished mandates.
BY JULIE CAFLEY
OCT 27 2021 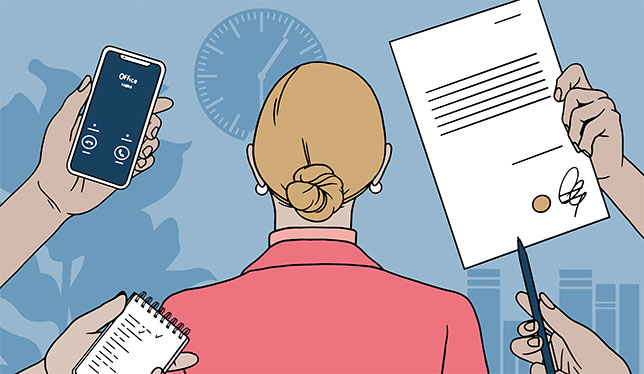 An expert on leadership in higher education explores the reasons women are less likely to be appointed president, and why so many have unfinished mandates.

Those are the words of David Turpin, former president of the universities of Victoria and Alberta. My own work, as a researcher who focuses on this issue, supports his assertion. Yet if you examine the numbers, the problem appears to disproportionately affect women in this key leadership role.

Over the past decade, 18 Canadian university presidents have failed to complete their first term. This means that close to 20 per cent of universities had a president who stayed less than five years.

If we look at only the past three years, five university presidents have experienced abbreviated terms, of which four are women: Susan Mumm at Brescia University College, Aoife Mac Namara at NSCAD University, Nicole Bouchard from Université du Québec à Chicoutimi, and Mary Bluechardt at Mount Saint Vincent University.

The trend is worrisome and supports the longstanding belief that the risks associated with university leadership are more significant for women. Since 2010, 61 per cent of unfinished presidential terms have been held by women. Perhaps that would not be so notable but for the fact that men hold 69 per cent of university president posts in Canada. And among the most research-intensive universities, the U15, that figure rises to 87 per cent. Hence, women are highly underrepresented in the role, and disproportionately overrepresented when it comes to truncated mandates.

Only 20 per cent of the world’s top 200 universities have female presidents.

These issues aren’t limited to the Canadian context, either. It took until 2016 for Oxford University to hire Louise Richardson as the first female president in its 767-year history. The University of California at Berkeley, Cornell University, McGill University and the London School of Economics are also currently led by women. But only 20 per cent of the world’s top 200 universities have female presidents.

In Nerve, a recently released career memoir by Martha Piper and Indira Samarasekera, two of Canada’s first female university presidents share some frank stories about their time in the role – the missteps, the second-guessing, the sexism, and the lessons learned. Both note that while they were the first at their respective institutions – Dr. Piper at the University of British Columbia and Dr. Samarasekera at the University of Alberta – they were also the last. Appointing a female president seems to be a box that boards are keen to check. A disconcerting pattern is that very few institutions are hiring a second woman in the role. Dr. Piper reflects in the book that “being the first is not good enough, that until we have the second, the third and fourth women leaders, one after the other, we will continue to view women in leadership as the exception rather than the rule.”

Research by political scientist Malinda Smith on diversity gaps at Canadian universities highlights four key factors when it comes to the top role: job design and advertising; the role of external consultants; the diversity of selection committees; and the role and composition of the board, particularly the chair. She says diversity is a key factor in talent identification and the selection process. A lack of diversity disproportionately favours candidates who are white men.

Further, Dr. Smith observes that fewer female university presidents have served in that role at multiple universities. While Patrick Deane, Santa Ono, Deep Saini, Alan Shepard, Stephen Toope and Dr. Turpin have all served as presidents at multiple postsecondary institutions, Vianne Timmons and Annette Trimbee are the only current female presidents who have done so. One of the very few Canadian institutions that have had back-to-back female presidential appointments is McGill University. Heather Munroe-Blum and Suzanne Fortier have led that institution for a combined total of 18 years.

The precarious situation for female executives has been well documented. Globe and Mail journalists Robyn Doolittle and Chen Wang recently exposed the significant pay gaps that exist at Canadian universities. They also shared their data. It shows that women enter the university system as professors and researchers in equal numbers, but are outnumbered three to one in the top 10th percentile of leadership positions. The exodus of women on the ladder of university leadership is remarkable.

Other demographics such as race, ethnicity, disability, and sexual orientation also play an important role in leadership selection and need to be studied in more detail.

The role of the board

My ongoing research, which stems from my 2015 doctoral thesis, has found that departing presidents raise common concerns in six key areas: a lack of rigour in board governance and a misunderstanding regarding the complexity of university culture; mistrust within an often-inherited executive team; lack of mentorship or support; the lagging role of the predecessor; a lack of attention to the transition process, and issues relating to diversity in leadership.

The board of governors plays a crucial role in a university’s structure as the governing body, upholding and advancing the mission of the university. These unpaid volunteers are responsible for hiring and sometimes terminating presidents. The board also leads the transition process and sets the tone for their tenure.

Elizabeth Cannon, who served as the University of Calgary’s president for eight years, says public support from the board “is a critical factor for success.” That’s especially true during times of crisis. A board needs to put their full trust in their chosen leader. They need to have open and courageous conversations. They need to stand behind the decisions of the president. And they need to voice their support for the president’s leadership.

Likewise, to be successful in the role, a president needs to invest early in relationships with their board. They need to communicate often, both about the risks and the successes involved with the role. A lack of alignment between the president and the board chair is a solid predictor of derailment. Yet researchers are observing through interviews with current and departing female university presidents that women are seemingly less supported by their boards during times of crisis.

There is an urgent need to forge a path forward so that we can better design gender equity in university leadership. These institutions have a long history of discussing diversity and inclusion; however, it is not leading to real change. As generators of knowledge, drivers of research and educators of global citizens, we need to hold universities to a higher standard than other organizations. Universities need to demonstrate the advantages of championing leadership that both represents the population that they serve and that lives up to the important research they advance.

So, how can we design more inclusive institutions that provide support for women to attain and thrive in positions of leadership? I propose three straightforward ideas to advance change: using data and metrics methodically and publicly, advancing cultural awareness, and designing equity more purposefully.

Women currently hold 31 per cent of university presidencies in Canada, and thus are just reaching the threshold needed to advance change.

According to critical mass theory, a term coined by Harvard professor Rosabeth Kanter, a group needs 30 per cent representation to make a tangible difference to a culture. Women currently hold 31 per cent of university presidencies in Canada, and thus are just reaching the threshold needed to advance change. In many ways, they are still considered token and have not had the opportunity to disprove the baseless belief that their leadership is somehow insufficient. Numbers matter, and tangible objectives are needed to overcome the barriers caused by underrepresentation.

Universities need to make hard commitments. Metrics increase accountability and help advance change on many fronts. International organizations such as the United Nations Development Programme, the Organisation for Economic Co-operation and Development, the World Bank and the World Economic Forum count both inputs and outcomes to rate countries on gender equity issues. Ironically, university researchers drive much of this data, but their own institutions are not reflecting this best practice.

Studies conducted by behavioural economists show that women often need to be approached multiple times for leadership or political roles, and that they tend to apply for tenure later than men. Researchers have also found that women negotiate less and subsequently earn less. In fact, studies have also shown that even when participation rates for women improve in the boardroom, men still hold the power and influence in terms of speaking time and decision-making. How can the power of data be used to drive change, to recruit and to retain female presidents? Universities seem to be ideally positioned to do so. And yet, action is sorely lacking.

In my research, I consistently hear references to the power dynamics, politics and subtle discourse that’s used when speaking about female university leaders. One institution that’s taking an innovative approach in this area is Harvard Kennedy School in Cambridge, Mass. It’s experimenting with “culture carriers,” trained observers who note behavioural dynamics in meetings. They examine whose ideas are celebrated and advanced, who speaks most often, who is being excluded and what is being done to ensure that everyone’s voices are heard. The observations bring to light an awareness about the interpersonal dynamics that are at work, highlight the unconscious biases held by both women and men, and allow their airing to be more objective and more focused on improvement for all.

There is a chronic issue with attracting female leaders to the role of president, even when the pipeline is robust. How can they be recruited with more intention and focus? Are university leaders, their board members and executive-search consultants ensuring that female candidates are asked multiple times to take on leadership roles on a systematic basis, as studies have suggested?

Universities and their boards also need to challenge executive search firms and selection committees to do better in terms of representation by writing job ads that are equally attractive to diverse candidates and by openly discussing all forms of bias in the interview process. If women are not as attracted to the role of university president as men, more research is needed to understand why. Boards need to modify the role so that it is more attractive to female candidates, and better yet for all future leaders. Boards need to proactively acknowledge that female presidents don’t enjoy the same level of support from their boards and ensure that full and often public support, as well as rigorous guidance are provided to female leaders during transition and during tenuous times.

Most current diversity planning in universities is based on good intentions. Many senior university executives and governors say they want more inclusive leadership, and they feel good about themselves when they talk about it. Universities are well honed at recruiting and retaining students; they develop plans with metrics, data and scorecards that drive their strategy. But where are their tangible plans for leadership recruitment and retention? Good intentions are not enough.

Canadian universities need to do more to ensure that their leadership reflects their communities. These institutions turn a mirror on the world through the important research they advance. It’s time to turn that mirror on themselves. They need to design a more equitable future for female university leaders, or they risk irrelevance in an inclusive future designed with diversity at its foundation.

PUBLISHED BY
Julie Cafley
Julie Cafley is vice-president, communications and external relations at the Digital Research Alliance of Canada, and a tireless champion for diversity initiatives. Her PhD thesis focused on higher education leadership and governance through the lens of unfinished terms of Canadian university presidents.
SEE SIMILAR STORIES
COMMENTS
University Affairs moderates all comments according to the following guidelines. If approved, comments generally appear within one business day. We may republish particularly insightful remarks in our print edition or elsewhere.