Administrators warn of tough sanctions for those breaking pandemic rules, while prioritizing a gentler sort of persuasion.
BY MATTHEW HALLIDAY
NOV 11 2020 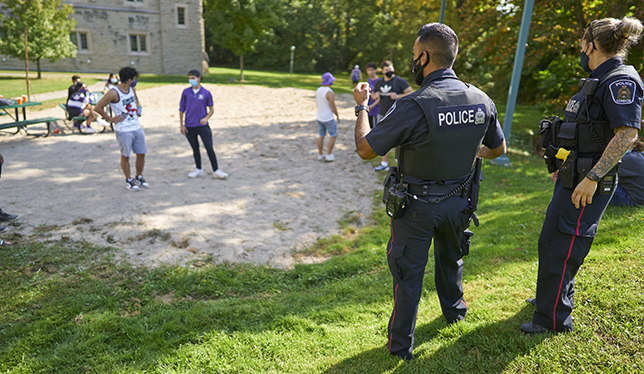 Administrators warn of tough sanctions for those breaking pandemic rules, while prioritizing a gentler sort of persuasion.

For years now, the annual Fake Homecoming parties at Western University in London, Ontario, have stymied police, campus administrators and the university’s neighbours. Thousands of students fill the city’s Old North neighbourhood every September, jamming porches and front lawns, hanging from roofs and thronging streets. (It’s called Fake Homecoming because it is not affiliated with the university’s official annual homecoming weekend, which was moved several years ago to late October.)

This year, with at least 70 COVID-19 cases identified among Western students by mid-September – many linked to gatherings and parties – tensions around the so-called FoCo festivities on September 26 were especially fraught. The university was ready to bring down the full weight of its code of conduct, expanded in 2019 in the wake of that year’s raucous parties, with sanctions up to, and including, expulsion.

To everyone’s relief – except maybe a few diehard partiers – FoCo 2020 turned out to be mostly a bust. There was still plenty of revelry, but the evening looked more like a quiet night at home than the usual neighbourhood-enveloping bash. Ultimately, two students were fined by campus police and about 100 faced code of conduct sanctions for residence parties that exceeded Ontario’s allowed gathering limits. No new cases of COVID-19 have been traced to those gatherings, according to public-health authorities.

Jennifer Massey, Western’s associate vice-president in charge of student experience, calls the response a successful example of the university’s “harm reduction” approach to handling student socializing in the age of COVID-19: making sure serious consequences are waiting in the wings, while prioritizing persuasion, education and outreach. “I think this approach is essential right now,” she says. “Rather than only telling students what they can’t do, we’re telling them what they can do, and how to apply directions from public health in ways that help them live their social lives with low risk.”

For the fall 2020 semester, universities have mandated physical distancing, reduced residence occupancy and are otherwise doing as much as possible to keep students at a literal arm’s length from one another. But a big part of their success or failure at managing outbreaks was always going to come down to the behaviour of students themselves, in private. To that end, administrators have more recently been adjusting codes of conduct and developing new sanctions to keep risky gatherings in check. But a cross-country scan of responses finds that most are trying to balance tougher sanctions with a gentler approach.

“I think balance is a very good word,” says Nona Robinson, Trent University’s associate vice-president of students. “We’ve really focused on behaviour change and reparative efforts.” Rather than rewrite the school’s code of conduct or implement a bevy of new rules, says Dr. Robinson, Trent has worked with student leaders on outreach efforts, developed online education modules and made COVID-19 safety central to orientation activities. So far, she says, “that’s been enough.”

The jury is still out on whether that approach will remain sufficient as the pandemic continues through the 2020-21 academic year, and possibly beyond. Brock University researcher Tony Volk, a professor in the university’s faculty of social science, was lead author in September on a study surveying 516 young adults in Canada and the U.S., gauging their responses to COVID-19 restrictions. His findings, he said, “suggest … that if you want to get more young adults buying into it, you have to make the consequences more immediate and more personal. So things like higher fines, expulsions from schools and emphasizing [that] COVID-19 can still make young adults very sick.”

The highest-profile use so far of those kinds of sanctions in Canada has been at Université Sainte-Anne, in the small community of Pointe-de-l’Église (Church Point), Nova Scotia. Incoming Sainte-Anne students were required to sign a special COVID-19 code of conduct, attest to their symptom-free status, agree not to attend social gatherings on campus and promise to abide by public-health guidelines – including the mandatory 14-day self-isolation required of all travellers arriving from elsewhere into the “Atlantic bubble” comprised of the four Atlantic provinces. In September, one student was found to have lied about having self-isolated before arriving on campus and was swiftly expelled.

“I think at that time, the fear was at its maximum,” says Sebastien Dol, the university’s director of student services and internationalization, about the mood in the small village. With no cases of COVID-19 in the community, the influx of students had provoked serious anxiety. “They perceive a threat,” says Mr. Dol, “which is fair, but I think that that threat was well mitigated, and the fear has really subsided.”

That kind of community anxiety – both in urban neighbourhoods adjacent to campuses and in small towns whose populations surge during the school year – have become a fixture of the conversation around COVID-19 on campus.

Located in Sherbrooke in Quebec’s Eastern Townships, Bishop’s University has promoted the idea of the “BU Bubble” to protect the campus and the local community. The university has also relied on student leaders themselves to plan and organize safe socializing, which included an in-person but physically distanced orientation.

“It’s not possible to police 2,000 students constantly, and we don’t want to. These are adults, after all, and getting buy-in is key.”

Stine Linden-Andersen, Bishop’s dean of student affairs, explains that when images emerged of massive gatherings at U.S. campuses and adjacent bars (which no doubt contributed to the more than 180,000 infections among students as of mid-October), “we were actually very worried. It’s not possible to police 2,000 students constantly, and we don’t want to. These are adults, after all, and getting buy-in is key.”

Bishop’s added an addendum to its code of conduct, including new COVID-specific sanctions, but hasn’t yet had to apply those measures. Dr. Linden-Andersen says that students themselves, quick to call out unsafe behaviour among peers, have been largely to credit. The campus has seen no infections as of this writing.

That was also the case after a handful of rule-breaking gatherings at Trent in early September, according to Dr. Robinson. “The social media reactions, which appeared to be from other students … were absolutely scathing,” she says. “There’s quite a lot of peer pressure right now around behaviour.” Peer-to-peer messaging, she says, is likely to be more effective than scolding from elders. (In August, Ontario premier Doug Ford cautioned students to “cool your jets with the partying,” an entreaty that seemed unlikely to compel many teenagers and twentysomethings.)

But there’s an inherent danger there as well, say some, creating an atmosphere of blaming and shaming for modest transgressions – or assumed ones. “What we’re finding with COVID is there’s a lot of hearsay in the community, whether from other community members or fellow students,” says Kate McCrae Bristol, dean of students at Wilfrid Laurier University, which as of October 19 has seen 20 cases on campus, linked to residence transmission and study groups. “We can’t be charging students without detailed and accurate information.”

Laurier hasn’t developed any COVID-specific rules, instead relying on its existing non-academic code of conduct to capture any COVID-related transgressions. It’s also chosen to rely as much as possible on community partners, including bylaw officers and police, to crack down on misbehaviour. Meanwhile, the university administration, says Ms. McCrae Bristol, is focusing on what she says a university does best.

“University is such a critical point in a person’s life,” she says. “There are so many opportunities for growth – and mistakes. There are authorities in our community who we work with who can apply those punitive measures, but it’s our duty to help students work through this period. We’re here to educate.”

PUBLISHED BY
Matthew Halliday
Matthew Halliday is a journalist, editor, and copywriter whose work has appeared in magazines and newspapers nationwide.
SEE SIMILAR STORIES
COMMENTS
University Affairs moderates all comments according to the following guidelines. If approved, comments generally appear within one business day. We may republish particularly insightful remarks in our print edition or elsewhere.