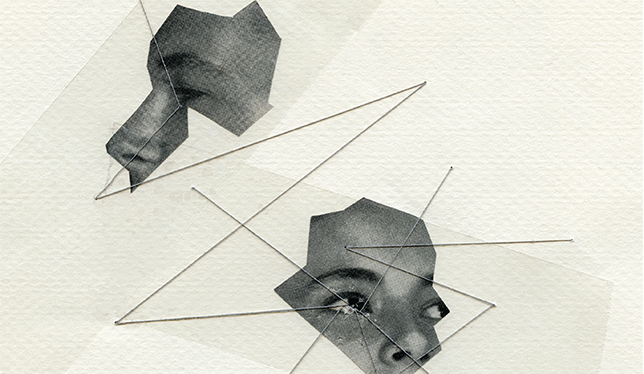 Over the past year, the University Affairs team has read and reported, edited and produced, hundreds of stories. Here are six that stayed with us. I was sexually assaulted. I turned to my university for help. Here’s what happened

Coming up with the visuals for this first-person essay about a student who sought help from her university after she had been sexually assaulted was one of the most challenging assignments for the art team this year. The challenge with this type of personal narrative is to tell the story visually in a respectful and empathetic manner while still capturing the reader’s attention, and reflecting the story’s core message, its theme, its feeling. We opted for a provocative headline paired with a collage illustration by Najeebah Al-Ghadban. The composition evokes the feeling of a struggle and betrayal between the female and male subjects while the threads connect the portraits, acting as intersecting paths that reflect the disorientation and confusion experienced by the survivor. In our print magazine (Oct. 2018 issue), the headline is treated in large uppercase letters to emphasize the statement, and I pierced some of the letters with a needle to illustrate the idea of being poked at and prodded, of being wounded. Arbitration decision on student evaluations of teaching applauded by faculty

No one likes to be judged, and that is no less the case for professors when students are evaluating the quality of their teaching. Student evaluations of teaching have always been a sore point for faculty, so when University Affairs reported on the arbitration decision declaring that Ryerson University could no longer use these evaluations in tenure and promotion decisions, our readers took notice – the article quickly became our most-read of the year. We’ll also be following this up with a feature article in the March-April 2019 issue exploring what impact this decision might have Canada-wide. I will admit that I had never heard of Vivek Shraya before my colleague Natalie mentioned her in a story meeting back in December 2017. The more Natalie described her, the more intrigued I became. A photo shoot was arranged and when the pictures came in, I was struck by the air of sophistication surrounding Miss Shraya. Then I read the article Soraya Roberts wrote and was further inspired by her list of accomplishments. How does one person look so glamorous and have the time to write fiction, non-fiction, poetry, teach, do research and perform in a band? By coincidence, another colleague handed me Miss Shraya’s latest book, I’m Afraid of Men, a couple of months ago. “You should read this,” he said. “It’s so good.” I took the book home and read the whole thing in one evening. My opinion solidified of Miss Shraya: she is a powerhouse. I admire her spirit and willingness to put herself out there. Many universities basically operate like small cities and it takes a massive team of skilled people to keep all the moving parts running smoothly. I was so pleased that we could widen the scope of our usual coverage and shine a spotlight on just a tiny sampling of some of the folks who work at all kinds of trades and jobs in these institutions. And I’ll admit, I have a bit of a personal stake in singing the praises of these employees: my partner spent a couple of years as production chef at a large university, so I’ve long heard tales of just how much goes into getting that dining hall, omelet station, Tim Hortons outlet or gala dinner prepped – especially during residence move-in, exams and conference season. Did you know that a residence dining hall can go through more than 1,000 litres of chocolate milk in one day? Those are the quantities that folks like Vijay Nair, executive chef in hospitality services at the University of Guelph, are dealing with. Keep that in mind the next time you’re waiting in line at your campus cafeteria. Olympic-bound athletes rely on the kindness of their professors

For as long as I can remember, I have always had a fascination with the Olympic Games. It started when I was young, as my family and I always watched the competitions together. As I grew up, my fascination moved from the Olympic Games itself to being in awe of the dedication the athletes display in their sport. In 2010, I even got the chance to see the athletes perform in person in Vancouver – and it definitely didn’t dampen my enthusiasm. This article, which takes a closer look at how student athletes juggle studying with intensive training and competing, further amazed me with how they are able to stay so focused. It helps to shine a light on both their academic and athletic achievements. 7 teaching tips to consider for your classroom

Teaching is the cornerstone of what universities offer to students and society, even if it is sometimes taken for granted. For many university faculty, there is no formal training in this area. All the more reason to share what people are trying, and seeing work, in a university classroom setting. Earlier this year, I had the pleasure of compiling a few teaching tips, techniques and routines by our readers. From a simple index card to polling software, we were pleased to share some crafty responses. Stay tuned for more on teaching in University Affairs – and in the meantime, feel free to reach out for a follow-up to our “teaching tips” story.