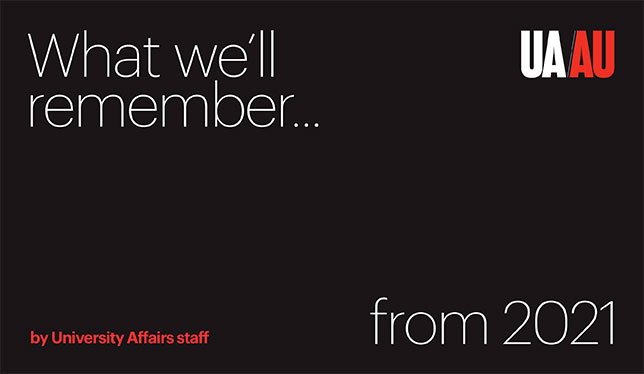 Illustration by Essy May.

It’s been quite the year. We’ve read and reported, edited and produced hundreds of stories, many of them related to the COVID-19 pandemic. While we get ready to say goodbye to 2021, here are the stories we’ll remember most. 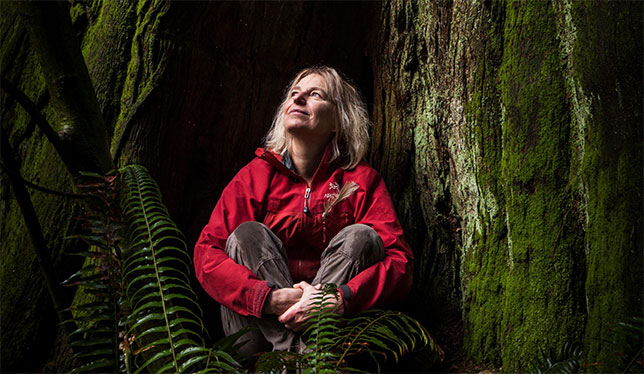 Many of the stories we’ve published over the past year that will stay with me focus on universities responding and adapting to COVID-19, or efforts to make these institutions more inclusive. Kerry Banks’ profile of Suzanne Simard, a professor in the department of forest and conservation sciences at the University of British Columbia, stands out as an exception. It provides a close-up look at a Canadian researcher whose work has important implications for another urgent issue: climate change. “In a series of landmark experiments performed while dodging grizzly bears in B.C.’s verdant interior, she discovered that trees are connected to one another through vast and complex underground fungal root systems known as mycorrhizal networks,” Mr. Banks writes.

While Dr. Simard’s early-career finding that trees communicate with each other was initially met with considerable criticism, in the years since it has caught on in academia and beyond. In May, Dr. Simard’s book, Finding the Mother Tree: Discovering the Wisdom of the Forest, hit store shelves and became a New York Times bestseller. Production companies have acquired the film rights and Dr. Simard has said that actor Amy Adams looks set to play her on the big screen. The book, film, and her continuing research aim to help scientists and lay people alike understand the complex relationships that underpin healthy forests – and what can be done to minimize the impact on them as the planet warms. 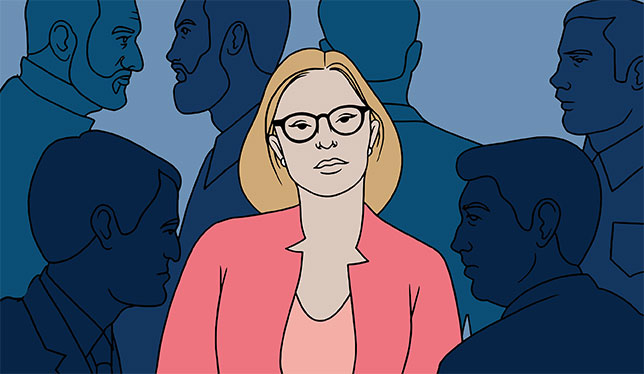 This story idea came about in a very interesting way. I started doing research on whether or not the pandemic had caused many Canadian university presidents to step down from their positions. After chatting with Holly Batten, Universities Canada’s executive office lead, we quickly discovered that there were some presidents who had left their positions, but not by choice. The part that particularly caught my eye was that they were also all women.

After discussing how the story idea was clearly heading in a certain direction with our publisher, Philip Landon, he mentioned contacting Julie Cafley as a possible source. When I phoned her, I did not anticipate that not only was she aware of all the unfinished mandates, but she had already spoken to several people about them. This made her the obvious choice to write the article, and I think she did a great job. I particularly liked the  advice she offered to those working in higher ed to avoid these situations in the future. As she states at the end of her essay: “These institutions turn a mirror on the world through the important research they advance. It’s time to turn that mirror on themselves.” 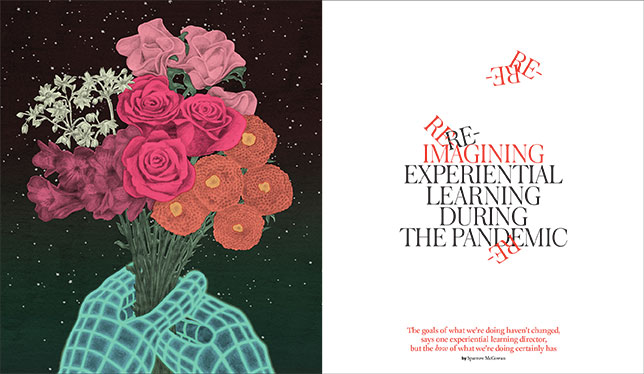 Re-examining experiential learning during the pandemic

I always enjoy the design process most when the story and artwork come together seamlessly. The opening layout of this story features an illustration by Essy May, a science-fantasy artist based in London, England. She combines a love of stars (her uncle is an astronaut) and sci-fi with a futuristic aesthetic.

It was a perfect fit for a story about re-imagining experiential learning. While her schedule did not allow us to commission original artwork, we were able to pick an existing print from her portfolio that made the story come alive. The illustration depicts a futuristic world in which a pair of virtual hands has the ability to hold a blossoming bouquet of flowers. The flowers appeal to the reader’s sense of touch, smell and sight, which is an interesting juxtaposition to the virtual environment described in the story.

A dark, starry universe acts as the backdrop and evokes a sense of wonder and endless possibilities. The layering of the type over the headline emphasizes the idea of “re-examining” and “redrafting,” and underscores the need for rapid transformation during this pandemic.. 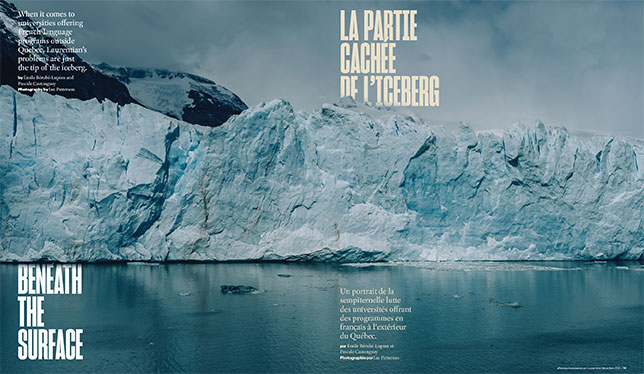 As an Acadian who graduated from Université Laval and has spent the better part of my career working in French outside of Quebec,  the opportunity to co-author this feature about the struggles of universities offering French-language programs in Canada meant a lot to me. With the year these institutions had, it might seem obvious why we decided to write about it. Yes, the Laurentian University situation precipitated things, but it’s more than that. For years now, French-language universities have had financial issues. As one source matter-of-factly put it: “This is not news.” And she’s right, for many years francophones across the country have known all too well the impact of those struggles; how it leads to francophones deciding to study in English because the program they want is no longer offered in French, or how it pushes some of them to move far away from home to be able to live and study in a French-speaking part of the country.

To provide a better understanding of the issues at hand would have been considered a good thing. But the real success of this feature is the fact that it has been made available for the English readers. Too often, the conversation about the needs and relevance of French-language education in Canada is confined to French-speaking circles. In a way, University Affairs bridged a gap between the two solitudes with the story – and that, to me, comes with the feeling of having done the right thing.