The ban on Black students studying medicine was in effect for decades, then forgotten, and wasn’t officially repealed until just two years ago.
BY WENDY GLAUSER
FEB 19 2020 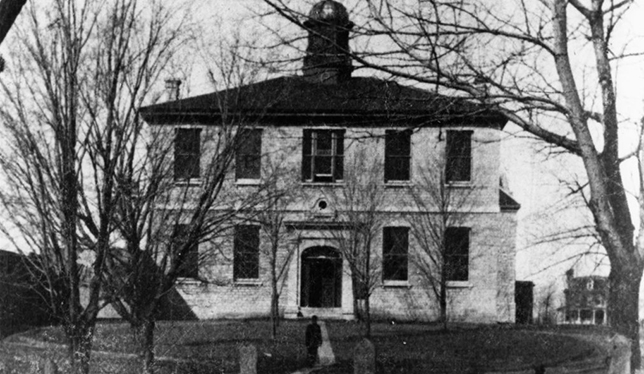 The Queen’s medical school was originally housed in this building, which still stands today. Now known simply as the Old Medical Building, it has been substantially modified since this photo was taken some time in the 1890s. Photo courtesy of Queen’s University Archives.

The ban on Black students studying medicine was in effect for decades, then forgotten, and wasn’t officially repealed until just two years ago.

In 1918, the Queen’s University senate voted to ban Black students from enrolling in its medical school. At the time, around 15 Black men were enrolled, representing one of the highest proportions of Black students of any medical school in the country, according to Edward Thomas, a cultural studies PhD candidate at Queen’s. While those students weren’t immediately forced out, they were strongly encouraged to leave by administrators.

According to his research, Queen’s administrators felt that expelling Black students would improve the school’s reputation with the American Medical Association, which at the time rated the conditions of medical schools in the U.S. and Canada. The Flexner Report of 1910, commissioned by the AMA, suggested that it would be better for Black students to study basic hygiene practices than to be trained as physicians. As a result of the report, most Black medical schools in the United States shut down, says Mr. Thomas.

The medical schools at McGill University, Dalhousie University and the University of Toronto also excluded Blacks students, or placed restrictions on their admission, for varying periods of time.

It wasn’t until 1965 that Black students once again enrolled at Queen’s, although by that time the history of the ban had largely been forgotten and administrators denied its existence. Instead, according to Mr. Thomas, they told student activists that Black students simply didn’t want to come to Kingston, preferring “more cosmopolitan cities.”

Repeal – and an apology

Mr. Thomas’s research also revealed that the ban had never been taken off the books, leading the university senate to officially repeal the ban in the fall of 2018 and issue a formal apology in April 2019. The university additionally moved to form the Commission on Black Medical Students, a group that includes faculty members, staff and students, “to see how we can do more than just apologize, but move forward in a positive way,” says Jenna Healey, a Queen’s history professor who sits on the committee.

The commission has recommended that the history of the ban be taught, so Dr. Healey is now co-teaching first-year medical students about the ban, as well as other ways medicine has been and continues to be exclusionary. (Women were forced out of medical training at Queen’s in 1883, only to be allowed back in in 1943.) “The medical profession looked quite a bit more diverse at the end of the 19th century but, by the mid-20th century, it was not diverse at all. It was primarily white, male physicians,” says Dr. Healey. “We need to understand that this wasn’t by accident. It was the action of individuals and institutions … and that’s had a negative effect on patient care and the reputation of the profession.”

In addition to introducing the ban into the curriculum, the Commission on Black Medical Students has created a scholarship for a Black medical student at Queen’s and a mentorship program. Black medical students and faculty members get together every month or so to “talk about how school’s going, things we’re concerned about or how to deal with instances of racism or adversity in clinical situations,” says Sabreena Lawal, a second-year medical student at Queen’s. “Being in a room with people who look like you and have gone through what you’re going through is incredibly helpful.”

Mr. Thomas says he hopes his research will help inspire students like Ms. Lawal. He’s been looking into what happened to the Black medical students who were enrolled at Queen’s around the time of the ban and has discovered that many went on to have “impressive historical achievements.” For example, Hugh Gordon Cummins, who graduated from the medical school in 1919, became the second premier of Barbados. Simeon A. Hayes, a 1920 grad, was a founding director of CL Financial, for decades the biggest Black-owned business in the Caribbean. Clement Courtney Ligoure, who graduated in 1916, was feted as a hero for his treatment of victims in the 1917 Halifax explosion. “I think for a prospective student who identifies as Black who’s thinking about coming to Queen’s to study medicine,” says Mr. Thomas, “it’s inherently valuable to understand that there’s this rich, early legacy of very talented Black people who studied medicine at the university.”