From tenure to ten-year reviews

If universities don’t institute serious periodic reviews of tenured faculty then governments will do it for them, argued Carleton University professor Peter Emberley.

He made the point during a recent debate at the University of Toronto among a panel of academics and journalists on the link between tenure and teaching quality.  The forum was organized by the Ontario Undergraduate Student Alliance, following its release of a report arguing that professors should be subject to five-year performance reviews in order to maintain their tenured status. 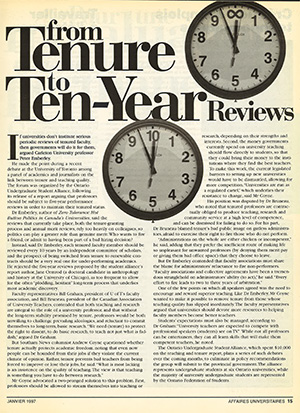 Dr. Emberley, author of Zero Tolerance: Hot Button Politics in Canada’s Universities, said the reviews that currently take place, both the tenure-granting  process and annual merit reviews, rely too heavily on colleagues, so politics can play a greater role than genuine merit: Who wants to fire a friend, or admit to having been part of a bad hiring decision?

Instead, said Dr. Emberley, each tenured faculty member should be reviewed every 10 years by an independent committee of scholars, and the prospect of being switched from tenure to renewable con­tracts should be a very real one for under-performing academics. He rejected the five-year reviews proposed by the student alliance’s report author, Jane Ormrod (a doctoral candidate in anthropology and history at the University of Chicago), as too frequent to allow for the often “plodding, hesitant” long-term process that underlies most academic discovery.

Faculty representatives Bill Graham, president of U of T’s faculty association, and Bill Bruneau, president of the Canadian Association of University Teachers, contended that both teaching and research are integral to the role of a university professor, and that without the long-term stability promised by tenure, professors would be both unwilling to challenge prevailing ideologies, and reluctant to commit themselves to long-term, basic research. “We need (tenure) to protect the right to dissent, to do basic research, to teach not just what is fad­dish,” argued Dr. Graham.

But Southam News columnist Andrew Coyne questioned whether tenure actually protects academic freedom, noting that even now people can be hounded from their jobs if they violate the current climate of opinion. Rather, tenure prevents bad teachers from being forced to improve or lose their jobs, he said. “What is most lacking is an insistence on the quality of teaching. The view is that teaching is something you have to do between research.”

Mr. Coyne advocated a two-pronged solution to this problem. First, professors should be allowed to stream themselves into teaching or research, depending on their strengths and interests. Second, the money governments currently spend on university teaching should flow directly to students, so that they could bring their money to the institutions where they find the best teachers. To make this work, the current legislated barriers to setting up new universities would have to be dismantled, allowing for more competition. “Universities are run as a regulated cartel,” which underlies their resistance to change, said Mr. Coyne.

His position was disputed by Dr. Bruneau, who noted that tenured professors are contrac­tually obliged to produce teaching, research and community service at a high level of competence, and can be dismissed for failing to do so. For his part, Dr. Bruneau blamed tenure’s bad public image on gutless administra­tors, afraid to exercise their right to fire those who do not perform.

“Administrations on the whole are either chicken or incompetent,” he said, adding that they prefer the inefficient route of making life so unpleasant for unwanted professors (by denying them merit pay or giving them bad office space) that they choose to leave.

But Dr. Emberley contended that faculty associations must share the blame for administrators’ reluctance to fire non-performers.

“Faculty associations and collective agreements have been a tremen­dous stranglehold on administrators’ ability (to act),” he said. “Every effort to fire leads to two to three years of arbitration.”

One of the few points on which all speakers agreed was the need to encourage and reward superior teaching. Like Dr. Emberley, Mr. Coyne wanted to make it possible to remove tenure from those whose teaching quality has slipped inordinately. The faculty representatives argued that universities should devote more resources to helping faculty members become better teachers.

Students’ expectations must also be managed, according to Dr. Graham: “University teachers are expected to compete with professional speakers (students) see on TV.” While not all professors can be entertainers, they can all learn skills that will make them competent teachers, he noted.

The Ontario Undergraduate Student Alliance, which spent $10,000 on the teaching and tenure report, plans a series of such debates over the coming months, to culminate in policy recommendations the group will submit to the provincial government. The alliance represents undergraduate students at six Ontario universities, while the majority of university undergraduate students are represented by the Ontario Federation of Students.