A unique endowment at the University of Alberta funds rare book acquisitions – one for each of the institution’s honorary degree recipients. 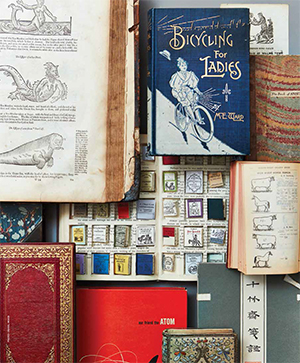 One of the most requested items in the Bruce Peel Special Collections at the University of Alberta is the “Wayne Gretzky book.” It’s not so much a book as it is a sculpture – a miniature hockey arena carved into an old copy of The Complete Works of Shakespeare. The library commissioned the work by Douglas Beube, officially titled Puck’s Arena: A Power Play, when the Great One received an honorary degree in 2000.

Puck’s Arena is one of nearly 400 rare books the library has acquired in recognition of and inspired by the university’s honorary degree recipients over the past three decades. Honorary Degree Books was established in 1987 by then-chancellor Tevie Miller with the help of the university librarian, university senate and private donors who pitched in to fund an endowment for these commemorative acquisitions.

It’s an annual tradition now overseen by Robert Desmarais, head of special collections and archives, and Linda Quirk, special collections librarian. The challenge, Ms. Quirk says, is finding the balance between the person’s interests, what’s available in the rare book marketplace, and what will enhance the library’s research collection. “You start to see how this can be a bit complicated,” she says. But look at what the special collections staff curates every year – often with less than a month’s notice – and these archivists and librarians start to seem more like treasure hunters.

Take last year’s big “get.” In recognition of Helen Clark, the prime minister of New Zealand from 1999 to 2008, Ms. Quirk tracked down a first-edition of The Pilgrim’s Progress translated in Māori that had been published in 1854. The university was already internationally recognized for having one of the strongest collections of various editions of the 17th-century novel by John Bunyan, and now it’s the only library in North America to house a Māori version.

And sometimes the perfect item isn’t a book at all. Mr. Desmarais once found a copper printing plate that had been used to make the bookplates for Wilfrid Laurier’s personal library. It was presented to another Canadian prime minister and Liberal, Paul Martin, when he was awarded an honorary degree in 2012.

U of A chancellor Douglas Stollery sees first-hand the impact of such thoughtful work – it’s the chancellor, after all, who gets to present the recipients with the donations that have been carefully chosen in their names. (The items remain on campus; however, recipients take home a hand-bound keepsake booklet containing a description of the acquisition.) At one breakfast for honorary degree recipients in June, Mr. Stollery presented Allan Goodman, president of the Institute of International Education, with a bound copy of Jimmy Carter’s farewell speech from 1981. Dr. Goodman, who spent some time in the Carter administration, skimmed through the book, and as he reached a specific passage he began to read aloud. What happened next still awes Mr. Stollery. “He got a little choked up and said, ‘I spoke those words to Jimmy Carter.’ It was one of those truly remarkable moments.”