The collaboration between the university and the Government of Nunavut highlights the importance of culturally safe care.

Officials from Nunavut and the University of Ottawa are teaming up in response to the need for more Inuit physicians, who have long been under-represented in the field. In fall 2023, two admission spots at the U of Ottawa medical school will open to Inuit students from the territory, funded by the Nunavut government and Nunavut Tunngavik Inc. (NTI), the group that upholds treaty rights for Inuit there.

The school’s Indigenous program, which supports Indigenous students, has been key in building the partnership’s strategy. “We’re not only looking at students that are ready to apply to medical school, we’re looking for those who are getting ready,” said Darlene Kitty, a Cree physician, professor and director of the Indigenous program. The partnership extends beyond admission spots, by providing targeted science courses through Nunavut Arctic College, and mentoring Inuit students through the application process. “It starts even with giving them the idea of, ‘I can be a physician,’” said Dr. Kitty. 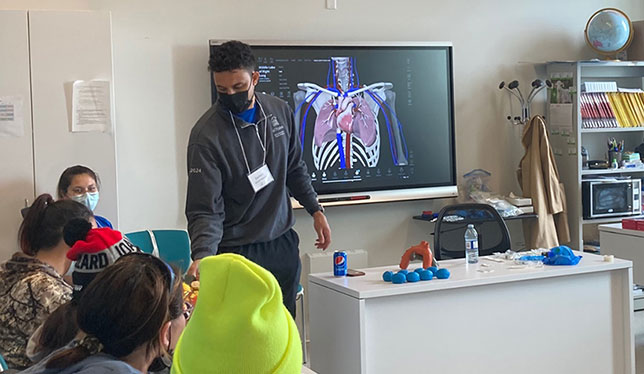 U of Ottawa med student, Zach Verret-Borsos, shows Nunavut youth how to properly insert an IV. Photo courtesy of Tanya Lalonde, U of Ottawa/NVision.

As in many rural communities, retaining physicians in the North can be a challenge. Within that, Inuit face barriers not just to accessing medical care, but care that is culturally safe and appropriate. Research by a team at the Ottawa Hospital found that Inuit patients were around 60 per cent more likely to face complications after elective and cancer surgeries, largely because of a delay in detecting health issues.

Much of these issues tie back to colonialism – which medical schools have a responsibility to address, says Claire Kendall, associate dean of social accountability in the U of Ottawa faculty of medicine, and a member of the team that worked on the Nunavut partnership. “We know that education is a colonial system, and one that we’re part of,” she said. “If we really want to contribute to the health-care workforce, we need to look back through the system.”

It’s one of the reasons Nunavut colleagues called for early training opportunities, and ongoing support once the Inuit medical students arrive in the program. The medical school has a number of supports in place for their Indigenous students, and Dr. Kendall said it’s important to reflect on how each piece responds to the Truth and Reconciliation Commission’s calls to action – which includes ensuring opportunities for more Indigenous health-care professionals. Dr. Kendall said she often comes back to a statement from First Nations family doctor and director of U of Ottawa’s faculty of medicine’s Centre for Indigenous Research and Education Sarah Funnell: “Indigenous people know what they need to be well.”

The partnership also highlights the importance of culturally safe care, a concept that’s become more widespread in the medical field. Dr. Kitty, who practices in Chisasibi, a Cree community in northern Quebec, says that when Indigenous patients are represented in healthcare, it’s crucial to the overall health of the community. “They [Indigenous physicians] can really understand the culture, the history and the social problems that are going on, but also recognize the resilience of the people, and their triumphs.”

Francois de Wet, territorial chief of staff in Nunavut and a physician at Iqaluit’s Qikiqtani General Hospital, says non-Indigenous physicians can and should be trained in culturally safe care, where appropriate. “The idea of having more Inuit physicians is not that they are the only ones that are providing the care, but that they come in with that lived experience,” he said. “Non-Indigenous physicians should be educated to have that background. We can’t put that burden only on our Inuit physician’s shoulders – it’s something we all have to do.”

Dr. Kitty said that ultimately, the goal is to eliminate barriers Indigenous people face to quality health care. “Since Joyce [Echaquan] died tragically, systemic racism has come to the forefront in medical schools,” she said, of the Atikamekw woman who died after healthcare professionals ignored her pleas for help in a Quebec hospital. “It can be mitigated somewhat by increasing awareness of Indigenous issues, but also the good, like the richness of the culture, community life – all the positive stuff.”