Active History website aims to ‘get history out of the university’

The site’s readership and content have expanded over the years, now reaching an average of 40,000 visits per month.

Last July, Crystal Fraser and Sara Komarnisky – a PhD candidate and a postdoctoral fellow, respectively, in history at the University of Alberta – collaborated on a list of 150 acts of reconciliation. They identified actions that most Canadians could presumably take on and learn from, with recommendations such as “Read the Indian Act” and “Volunteer your time to an Indigenous non-profit.”

Wanting their ideas to reach as wide an audience as possible, the two approached ActiveHistory.ca, a blog-style publication curated and edited by a collective of graduate students and early-career historians. (There is also a French-language sister site, HistoireEngagée.ca.) Ms. Fraser, whose research focuses on residential schools, knew the site well, having curated a week’s worth of articles on Indigenous issues as guest editor in January 2016. The site’s regular editors welcomed her and Dr. Komarnisky’s submission, and with at least 27,000 hits, the article, titled “150 Acts of Reconciliation for the Last 150 Days of Canada’s 150,” has become one of Active History’s most popular posts – a testament to the website’s growth and success since its founding nearly a decade ago.

The Active History website, launched in 2009, arose from a 2008 conference by the same name organized by doctoral students at York University. Participants decided to create a platform that would make historians’ research more accessible to the broader public. Enter ActiveHistory.ca, a non-profit, volunteer-run outlet that aims to “get history out of the university,” as Daniel Ross, the site’s public outreach coordinator, put it.

“Academics are good at writing long-form, thoughtful articles that reach a small audience, much of which is disciplinary or sub-disciplinary,” said Dr. Ross, an assistant professor in history at Université du Québec à Montréal. Freed of the restrictions of traditional academic publishing, such as the lengthy peer-review process and paywalls on journals, he said, historians have the opportunity to not only reach a broader audience, but also to engage with their readers through discussions of articles on the site’s Facebook and Twitter accounts.

Thomas Peace, one of Active History’s founding editors, said the site launched at a time when it was evident the voices of public historians were badly needed, but rarely consulted. When the U.S. housing market collapsed in 2008, setting off a global economic crisis, “the people the media were going to were often economists, not historians,” he said. “That’s not good for civic discourse.” 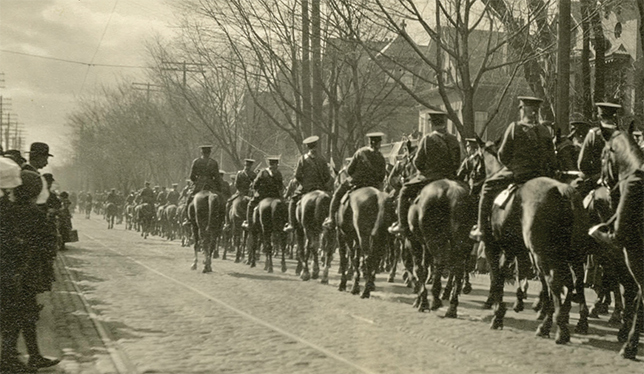 Active History has an ongoing series on the First World War. In this photo, troops parade down Bloor Street in Toronto before leaving for Europe in 1915. Photo courtesy of Toronto Reference Library, Baldwin Collection, 966-2-35.

Over the years, the site’s growth has proven there is an appetite for more historical context around current events. Initially, editors posted new content about twice a week; today, most of the site’s articles are submitted unprompted, with fresh content posted almost daily.

The site’s readership has expanded along with the content, currently reaching an average of 40,000 visits per month. Most core readers are other historians, said Dr. Ross, but the site is also widely read by teachers, many of whom draw on the site for classroom materials. The publication has also started earning wider recognition and accolades from the academic community – in 2016, Active History won the Public History Prize from the Canadian Historical Association.

Much of the site’s content is shaped by current events. Ahead of the NDP leadership vote in October, for instance, the site published a two-part series on the party’s past races. During NAFTA negotiations with the U.S., the site explored Canada’s historical attitude toward the trade agreement. But the content also often revisits commemorated events: one of the site’s earliest hits, for instance, was an article published in 2009 on the 20th anniversary of the fall of the Berlin Wall. In 2014, the site launched its longest running feature: an ongoing, multi-year series on the First World War.

But though the editors try to maintain the site’s timeliness and relevance, there’s still work to be done in terms of representation. Krista McCracken, archives supervisor at Algoma University and one of Active History’s current editors, said many of the editors are keenly aware that the site needs greater cultural, geographical and gender diversity among its contributors. It’s also lacking political balance: “We tend to be very leftleaning,” she said. “The challenge is to get that other perspective.”

Yet that very awareness was, in part, what drew Ms. Fraser and Dr. Komarnisky to publish in Active History. The editors “don’t shy away from controversy,” Ms. Fraser said, recalling a post she co-wrote with food historian Ian Mosby in 2015 in which they criticized an op-ed on residential schools that had been written by Ken Coates, a prominent historian. “It’s not every day you find people willing to push the status quo in academia.”