Staff and students at Alberta’s postsecondary institutions are running the numbers on their respective budgets and looking for dollars to spare after the governing United Conservative Party (UCP) slashed funding for advanced education.

Cuts were expected for months, after a blue-ribbon panel last summer criticized the province’s $5.6-billion postsecondary system as overly reliant on government funding, with low completion rates and little focus on preparing students for the labour market.

This first UCP budget hit students especially hard. Tuition fees could rise by up to 21 percent over the next three years, while at the same time various financial supports for students have been eliminated. “Devastating is the word I would use,” said Shayla Breen, president of the Students’ Association of Mount Royal University.

The budget is Alberta’s harshest in spending cuts in more than two decades, with multiple clawbacks to advanced education planned for the next three years. The province will remove over $117 million from postsecondary funding in 2019, or 5 percent, with further cuts of 2.8 percent in 2020, 2.2 percent in 2021 and 2.3 percent in 2022. “When compounded with population growth and inflation, these reductions amount to a cut of about 30 percent over the next years,” according to an analysis from the Parkland Institute.

The UCP government gave institutions a green light to raise tuition 7.0 percent per year at the institutional level for each of the next three years, with a maximum 10 percent hike to any given program in a year. At the same time, the province will increase the current interest rate for student loan funding from prime to prime plus one, applicable to all current and outstanding loans. It will eliminate tuition and education tax credits, and has terminated the Summer Temporary Employment Program, which created 12,000 positions for postsecondary students over the last four years.

“All these measures will have severe impacts on affordability and accessibility of postsecondary education, causing many Alberta families to sink further into debt,” according to a joint statement issued by six associations representing postsecondary students in the province.

Student representatives say they worry about students dropping out of school, not applying for postsecondary education at all, or cutting back on food and other expenses. They also worry about the impact on student well-being.

“Our concern is that these financial strains will most likely have an impact on student mental health and that’s something that we want to make sure that government and institutions, as they’re making more decisions, will think about and consider,” said Sadiya Nazir, chair of the Council of Alberta University Students and vice- president, external, of the University of Calgary Students Union.

“A bump in the road”

Most universities have not yet outlined how they will respond to these mid-year cuts but layoffs, unfilled vacancies and tuition increases have been proposed. Several universities hosted town halls in the weeks after the October 24 budget to discuss potential responses.

“This is a bump in a very long road. It’s a big bump but we’ll come out at the end of this and we will still be a great university,” University of Alberta president David Turpin told a campus forum, according to Folio, the university’s in-house magazine.

Alex Usher, president of Toronto-based consulting firm Higher Education Strategy Associates, wrote on his blog that the cuts to institutional operating budgets are “big, much bigger than the initial headlines are letting on. … Neither the Alberta cuts of 1993 nor the Ontario cuts of 1996 were this big.”

While the cut to Campus Alberta grants is 5.0 percent this year overall, the reduction varies by institution. Edmonton’s MacEwan University will be the hardest hit, with a 7.9 percent cut, amounting to $9.1 million. 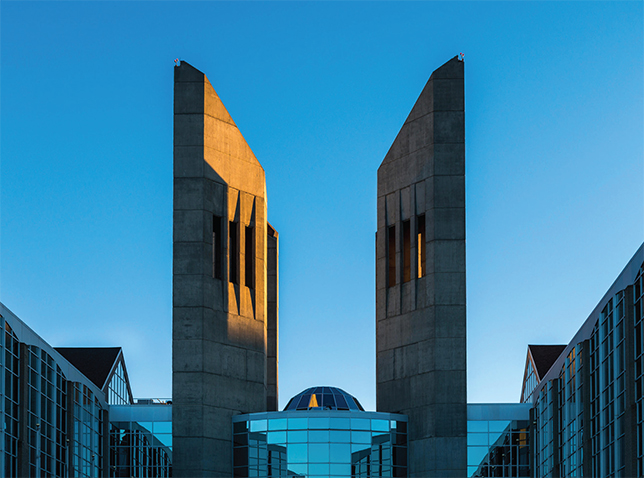 MacEwan University’s library building. A spokesperson for the Edmonton university said the budget presents a “significant challenge” for the institution. Photo by Michael Wheatley Photography / Alamy.

“This is one of the largest in-year cuts in our institution’s history,” a MacEwan representative said in an emailed statement. “This presents a significant challenge for the university and there will be unprecedented implications across the institution.” MacEwan will increase tuition and mandatory fees next September but has not decided on specifics.

At Mount Royal University, president Tim Rahilly wrote in an internal email to staff that the university will eliminate 10 filled positions and abolish 10 to 15 vacant positions. “There will be no other layoffs planned in this calendar year, but unfortunately I must tell you we have more budget work to do, which will inevitably result in the elimination of more positions in 2020.”

Mike Mahon, president of the University of Lethbridge, said his institution is looking at using different contingency funds and will not be filling some positions. Decisions about tuition fees will be made in 2020. “It’s too early for us to say what we’ll do on that but we know that that is a lever that we can pull on.”

Dr. Mahon said the sharp drop in government funding marks a significant change for the province’s postsecondary institutions and the long-term effects are unclear. He said he wants the government to understand that universities will play a vital role in helping Alberta evolve economically during a difficult time.

U of A, meanwhile, has not announced long-term plans but the university will cancel about $10 million in deferred maintenance contracts, use an in-year operating surplus and is seeking board approval for drawing on its investment reserve.