It’s not often that someone suggests a university be closed.

But that is one implication arising from former Supreme Court justice Louise Arbour’s recent report on sexual misconduct in the Canadian Armed Forces, which was released in May. The Department of National Defence commissioned the report last year, following a series of scandals involving the forces’ senior leadership, including the former chief of the defence staff and the senior officer in charge of military and human resources. Ms. Arbour’s mandate was to examine “sexual misconduct and leadership. The two are demonstrably interrelated,” the report states.

Recommendation 29 deals with the Royal Military College of Canada (RMC), calling for a review led by “an external education specialist” on the costs and benefits “of continuing to educate cadets at the institution.” The purpose would be to determine “whether the RMC Kingston and the RMC Saint-Jean should continue as undergraduate degree-granting institutions, or whether officer candidates should be required to attend civilian university undergraduate programs through the ROTP [Regular Officer Training Program].” That would essentially mean the end of the military colleges as they now exist, and a seismic shift in military education in Canada.

Ms. Arbour’s rationale is that both RMCs are rife with a culture of hyper-masculinity and sexual misconduct. Given the key role that the institutions play in producing the senior leadership of the Canadian Armed Forces, she argues that fixing the schools would go a long way toward fixing the military’s broader problems with sexual misconduct. 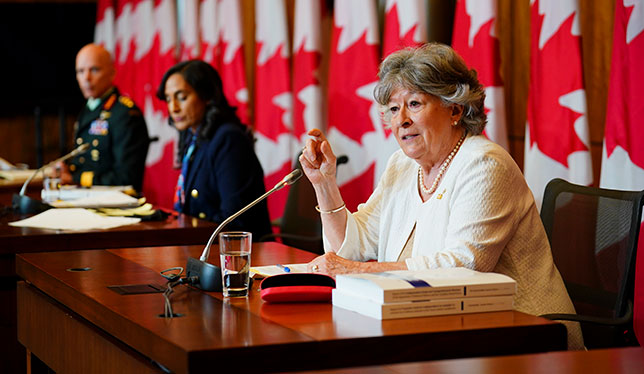 Former Supreme Court Justice Louise Arbour, and Minister of National Defence, Anita Anand, middle, release the final report of the Independent External Comprehensive Review into Sexual Misconduct and Sexual Harassment in the Department of National Defence and the Canadian Armed Forces in Ottawa on Monday, May 30, 2022. Also in attendance is Chief of the Defence Staff, General Wayne Eyre. Photo courtesy of The Canadian Press/Sean Kilpatrick.

The military colleges are complex institutions. While the most well-known in the English-speaking part of the country is located in Kingston, Ont., which boasts 1,600 full-time and 1,000 part-time cadets, there is also Collège militaire royal de Saint-Jean (RMC Saint-Jean in English) in Saint-Jean-sur-Richelieu, Que. The French-language institution was originally opened in the 1950s, closed in 1995 as a cost-saving measure, and has since reopened and is slowly growing again.

The cadets are paid members of the Canadian Armed Forces and are subject to the forces’ system of discipline. The colleges have a military commandant at the top and below this, an academic head and a serving officer who commands the cadets. Almost all cadets live on campus in a military system of wings and squadrons. The course of study consists of four pillars (academic, military, fitness and bilingualism), and there is a core curriculum intended to develop leadership skills.

Armed forces are by their nature circumspect organizations, and there has been little in the way of public reaction to the Arbour report from serving members. University Affairs was able to interview Col. Paul Lockhart, director of cadets at RMC Kingston, but were told that he would not answer questions relating to the Arbour report or sexual harassment. A spokesperson at National Defence headquarters in Ottawa said only that they are “in the early stages of reviewing the Arbour recommendations.”

But there are others who are willing to talk. One is John Cowan, who was the principal of the RMC Kingston from 1999 to 2008. Another is renowned military historian Jack Granatstein, who is an RMC graduate and was a member of RMC’s board of governors during Mr. Cowan’s tenure. Both contend that Ms. Arbour doesn’t understand the military colleges.

“She assumed that civilian universities were places where light and sweetness prevailed, and no sexual harassment ever occurred,” said Dr. Granatstein. Dr. Cowan said he had to deal with these issues when he was vice-rector at the University of Ottawa and vice-principal at Queen’s University before coming to RMC Kingston. “There was probably nobody on her team who had an understanding of the struggles that are going on at civilian universities,” he said.

Ms. Arbour disputes that characterization. “I think if you read the report,” she told University Affairs, “I said I am under no illusions that civilian universities are perfect. Far from it. The important difference, though, is that they have a vastly larger proportion of women.” The more women, she said, the more likely that their complaints will be taken seriously. While 57 per cent of postsecondary students in Canada are women, they only make up around 25 per cent of enrollment at the military colleges.

What can’t be disputed is that this isn’t the first time RMC Kingston has drawn attention due to the issue. In 2015, another report on the sexual misconduct in the Canadian Armed Forces written by retired Supreme Court justice Marie Deschamps listed problems at RMC, which factored into an internal review of RMC Kingston published in 2017. Lt.-Col. Mark Popov, a former head of cadet training at the institution, told CTV’s Mercedes Stephenson in 2018 that he had been ignored by his higher-ups in 2014 and 2015 when he brought cases of inappropriate behaviour by cadets to their attention.

That was also the experience of Kate Armstrong, who chronicled her time as a member of the first-ever group of women to enter the college back in 1980 in her memoir, The Stone Frigate. It detailed instances of inappropriate sexual behaviour, such as a group of fourth-year cadets who had a running bet about who could sleep with the most female first-years they were supervising. The book was published in 2019, and Ms. Armstrong was asked to give a talk on leadership at the RMC Kingston later that year. The event was also a chance for her to meet and speak privately with many cadets. Nearly four decades after her own experiences, it seemed nothing had changed. “The stories were exactly the same issues as from when I was a cadet,” Ms. Armstrong said.

Looking ahead, reforming the colleges will be no small task. But RMC has evolved over the years. When it was founded in 1876, it was a male-only, exclusively army, English-language engineering school. Today it’s a bilingual, co-educational liberal arts research university with two campuses.

As RMC history professor Howard Coombs points out, the institution has been repeatedly examined and reimagined. “It happens every few years. I think it’s healthy to scrutinize RMC,” he said. “We are a federal institution, and we have to deliver on something the country wants.”