Several universities have committed to supporting oppressed academics, but few have followed through.

Early last week, a Turkish woman stood at the front of one of Parliament’s classically decorated dining rooms and told a harrowing personal story of governmental oppression, threats and displacement.

In 2016, this Turkish scholar signed a petition that called for the protection of non-combatant Kurds in eastern Turkey. (University Affairs has agreed to keep the scholar anonymous out of concern for her safety and the safety of her loved ones in Turkey.) After signing the petition, the scholar said, she and other signatories were subjected to highly repressive measures including detention.

“Immediately after it was published, we started to get threats from governmental circles and ultra-nationalist figures [saying] that they were going to have a bath in our blood,” she said.

Later that year, the Turkish military attempted a coup against President Recep Tayyip Erdogan and his government, leading to persecution against academics to worsen. In an attempt to escape this oppression, she applied to Scholars at Risk, a global organization that places at-risk academics as visiting scholars with universities in safe locations. She was accepted through SAR’s Canadian branch and has spent the past year as a visiting professor at Carleton University.

SAR-Canada, launched in 2012, now has 17 institutional members, but the Turkish scholar is one of only four academics to be hosted by Canadian universities this year. The current number of scholars seeking placement through SAR’s various international outfits is more than 600, according to the organization’s 2016-2017 annual report. So why did only four scholars find a home in Canada?

Back at the lunch on Parliament Hill to celebrate SAR-Canada, Melanie Adrian, a member of the SAR-Canada steering committee, said that finances and time requirements are the main reasons behind the gap. It’s easy to become a member of SAR, but it takes significant institutional resources to host a scholar; a university not only has to hire the academic, but also provide a nurturing, welcoming and supportive environment for them, she noted. 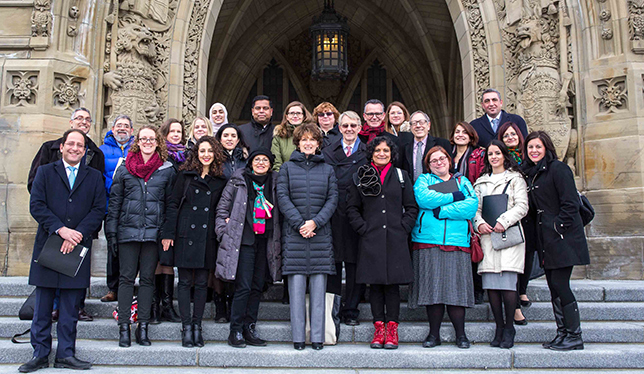 The SAR-Canada group that met on Parliament Hill. Photo courtesy of SAR-Canada.

“I think the worst thing that can happen is when a scholar is hosted at an institution, but there’s no one around to really care for them,” Dr. Adrian said.

Shaheen Nanji, acting director of Simon Fraser University International, said that preparing to host a scholar can take a long time because “the institution has to be really ready to receive the scholar and give them a meaningful experience.”

Dr. Nanji said that SFU joined SAR-Canada about six months ago and the institution is almost ready to host its first scholar. The university has moved through the process fairly quickly, she said, because the scholar they will potentially host is already in Canada with a valid visa. Dr. Nanji said there has also been strong support for the program from SFU’s executive, which has committed all the funding needed for a three-year pilot program.

Joyce Pisarello, senior program officer at SAR, said that the process of preparing for and hosting a scholar-at-risk varies by institution. Sometimes an administration will already have an open position they can fill with a visiting scholar, in other cases an individual office or department will help provide funds, or private donors might contribute to the program. The biggest expense generally is salary, she said, which may include health benefits and housing.

For Dr. Adrian, the effort is worth it to provide aid to academics in need and uphold academic freedom. When academic freedom is lost, she said, so too are new ideas that shape social change.

“A new model or method or bridge or soil type or plant species, or whatever it may be, enriches us. If we don’t have that, it’s not enriching us as a physical community but also as an intellectual, social community,” she said. “So every academic that is muted is an idea or set of ideas that we are not hearing.”

She added that “every university worth their salt should be part of Scholars at Risk.”