Lakehead project aims to restore one of several decades-old boats that are ‘catalysts for community building.’

This past winter, the city of Thunder Bay, Ont., was blanketed under record amounts of snowfall, and residents were driven inside for weeks on end by bone-chilling temperatures (not to mention COVID-19 restrictions). But in a marine garage on the frozen shores of Lake Superior, five Lakehead University students — outfitted in N-95 masks and respirators — were engaged in an activity that held out hope for brighter days ahead: restoring a 36-foot, 700-pound canoe.

The project was an upper-year, directed-study course in Lakehead’s Outdoor Recreation, Parks & Tourism program. Under the direction of the program’s technologist Rodney Swatton, the students came together to research materials and restoration techniques, sand and grind away the vessel’s damaged finish, rebuild the keel, reinforce the hull and gunwales, and redesign seats and thwarts.

The “big canoes,” as they’re known, have been part of the program since 1983. Students planned and executed weeks-long summer trips in the boats, paddling throughout northwestern Ontario. Mr. Swatton recalled staffing a two-week trip from Rainy River to Sioux Narrows. “It was a pretty amazing opportunity for teamwork, with 14 people in a huge boat, plus all their gear, portaging through the wilderness.” 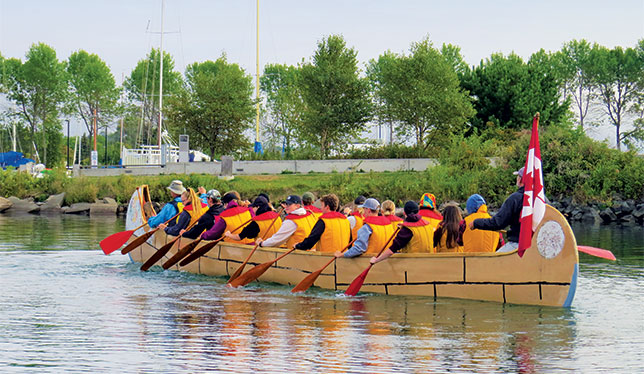 The canoes were later used in educational expeditions to the region’s schools, in which students worked summer jobs paddling to different locations to set up and staff interpretive stations.

But over the years, the canoes, which were stored outside, fell into a state of disrepair. In 2021, Mr. Swatton restored one of the boats with help from a local organization, Sail Superior, which offered up space and expertise. He was eager to share the skills he gained from that experience, and pitched the restoration project as a directed-study credit.

The course, said program director Leigh Potvin, “really represents the values of our program, in terms of hands-on, experiential learning, skills-building, and sustainability.” At a larger level, she noted, “the boats are catalysts for community building. They’re a real curiosity, and they bring people together.”

Josh Schultz, a recent ORPT grad, had been part of the group to paddle the first restored canoe on Lake Superior, and he jumped at the chance to restore another boat. “I’d heard so many stories about the boats’ history, how they were originally used in the program. And to know that the work that we were putting in could benefit other people in the future, that was a great opportunity.”

As part of the course requirements, he and fellow students kept detailed technical journals of their work on the boat, and drew heavily from Mr. Swatton’s notes on the first restoration — building and codifying institutional knowledge. “It’s almost like we’re compiling an instruction manual that can be referenced as people work on these boats in the future,” says Schultz, who landed a summer job with Sail Superior as it a direct result of his participation in the course.

Today, Dr. Potvin says the restoration is an opportunity to reconsider and reckon with the boats’ ties to Canada’s colonial past: originally called Voyageur canoes, the boats were often used to retrace the routes used during the North American fur trade in the 18th and 19th centuries.

“People can get caught up in the romance of the Voyageur experience, of retracing the trails, but we as a program are also at a real crossroads in terms of understanding our place and our role in confronting colonialism and settler culture, especially in Northwestern Ontario,” she said. Referring to the boats as “Big Canoes” is an important step, she notes, but it can’t be the only one. As the boats are restored, the program is engaging in an ongoing program of reflection in discussion over how they can be used in ways that are healing, both in terms of reconciliation and, more recently, from the COVID-19 pandemic.

“How can these boats provide our students with opportunities to flourish and develop? How can they bring together and build community?”