Every year Sheri Hincks, a lab instructor in the department of integrative biology at the University of Guelph, coordinates a series of field trips for the 70 or so students taking Limnology of Natural and Polluted Waters, a fourth-year course in water ecology. The group practices fundamental research techniques over the course of a week at Guelph Lake, two weeks at the Speed and Eramosa Rivers, and a day at a water treatment facility. It’s during these trips that students really engage and have fun with the course content, Ms. Hincks says. When she realized this year would look a lot different due to COVID-19, she found a way to bring hands-on labs to the online learning environment.

Ms. Hincks worked closely with Carolyn Trombley, a PhD candidate in the department, to develop an at-home fieldwork kit for students. The kits are inspired by the Leaf Pack Network, a citizen science project at the Stroud Water Research Center in the U.S., and include onion bags that students fill with leaves then anchor in a body of water for weeks before identifying the insects it has attracted and assessing water quality. Each kit also has a thermometer, rope, magnifying glass, water chemistry test strips, sorting trays, field notebook, whistle, safety guidelines and a few Daphnia (water fleas), which are used for testing water toxicity – roughly $30-worth of supplies apiece paid for by a grant from the university’s teaching and learning office. 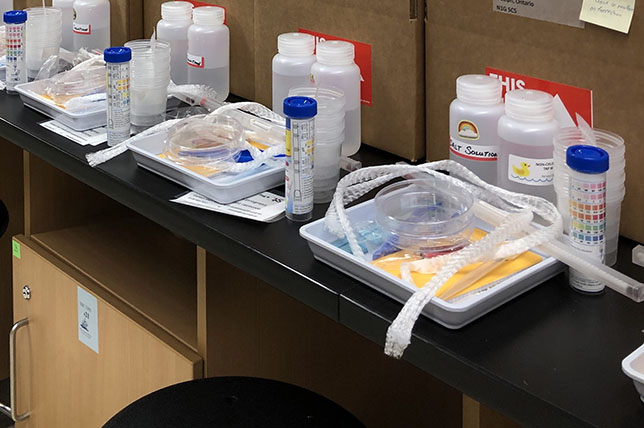 The at-home fieldwork kits, ready to be mailed to students. Photo courtesy of Sheri Hincks.

But putting the kits together had its challenges. For one, sourcing materials was a problem. Two days before the kits were due to be distributed, Ms. Trombley and Ms. Hincks scoured every dollar store within a half-hour drive to replace the shipment of magnifying glasses that hadn’t arrived. Delivery was another hurdle. To avoid delays and mailing costs, Ms. Trombley personally delivered kits to local students. The rest were shipped with mixed results – one kit was held up at customs at the U.S. border for 10 days, by which point only a single Daphnia survived the trip.

Now nearly halfway through the term, both Ms. Hincks and Ms. Trombley say the kits have been a huge success with students sharing anecdotes of field trips with parents, roommates and pets in tow. Many have even fielded questions from curious passersby. 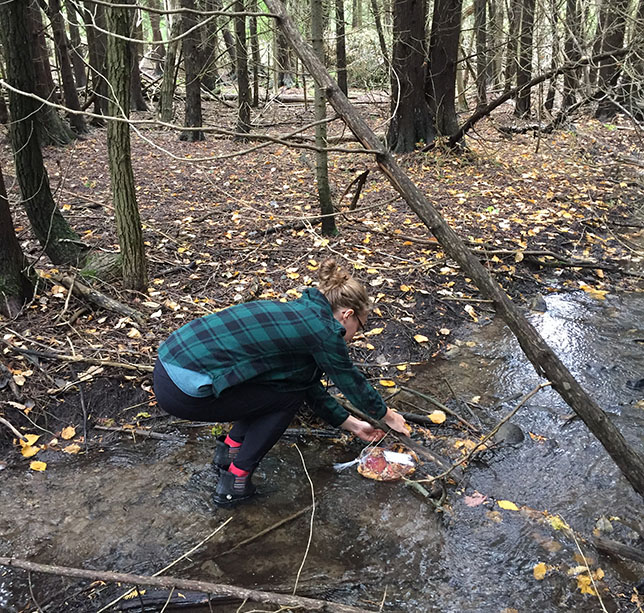 A student collects a sample with her at-home kit. Photo courtesy of Sheri Hincks.

“I think in a way like this is giving them something extra that they might not be getting in other courses this year,” Ms. Trombley says. “They’re getting outside, not just sitting in front of the computer, which is most courses right now. And if they’re seeing people outside, they’re getting a bit of that social interaction that they might otherwise be lacking. And being able to talk about science is really exciting for them, especially with … [an] audience like your parents.”

With undergraduate labs off-limits at most universities this school year, instructors at other institutions have developed their own kits. Students in General Chemistry, a second-year class at Concordia University, received a shipment of lab-grade glassware, a balance and burette for experiments requiring household supplies like vinegar, alcohol, salt and rice. Biology 1010 instructors Andy Hudson and Ashley Curtis at the University of Lethbridge created take-home laboratory sets for five different experiments. And at Western University, Michael Naish, a mechatronics systems engineering professor, put together robot kits for his second-year class.