Building trust in scientists one selfie at a time 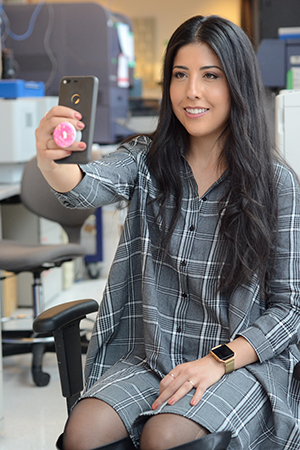 Samantha, one of many #ScientistsWhoSelfie, taking a
selfie in her lab at the University of Toronto that she’ll
later share on Instagram alongside an update of her
research. Photo by Arman Sadrzadeh.

Scientists are cold, boring and out of touch. PhD candidate Samantha Yammine is trying to break that stereotype with the help of the scientific method and Instagram. Both are at the heart of “To Selfie or Not to Selfie,” an experiment led by Louisiana State University to find out if posting selfies and interacting with Instagram followers helps scientists to appear warm, competent and trustworthy.

A team of researchers – including Ms. Yammine, who studies neuroscience and stem cell biology at the University of Toronto – is collecting data for the project, including the number of comments and likes on posts. The goal is to see how viewer perceptions are affected by gender and race. Ms. Yammine notes that the project also aims to challenge negative perceptions attached to snapping selfies in the workplace.

“People judge us if we take a picture of what we’re doing in the lab. Imagine a young woman, especially, taking a selfie in a lab,” she says. “They think it’s all useless content, and we [the research team] think it’s not, but we need to be sure of that.”

Based on other pervasive stereotypes and personal experience, Ms. Yammine predicts participants will rate scientists as friendlier and more trustworthy when their faces are visible in a post, young women will be viewed as warmer than men, and men will be seen as more competent than young women. “Ratings of attractiveness may also skew the perception of competence,” she says.

The team crowdfunded the project, promoting it online with the hashtag #ScientistsWhoSelfie. The campaign raised more than US$10,000 within a few weeks and thousands of scientists have since posted to Twitter and Instagram using the hashtag.