They call their discovery “Steve.” 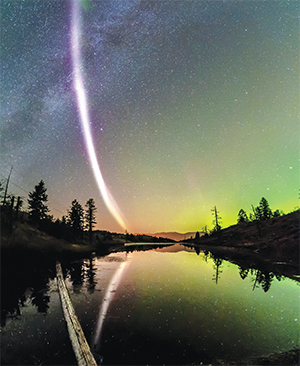 The purple streak captured here has been identified
as a unique type of space weather, called “Steve” by
researcher Eric Donovan and aurora chasers on Facebook.
Photo courtesy of Dave Markel/Pixels.com.

It’s an enigma, a thin wisp of violet light dancing at the edge of a geomagnetic storm. Nobody’s quite sure what causes this elusive streak of purple to appear in the sky, but a group of aurora photographers and experts know one thing: it’s called “Steve.”

Identified last spring by University of Calgary professor Eric Donovan, Steve is a “space weather” phenomenon that was long-familiar to night-sky watchers like the Alberta Aurora Chasers Facebook group. It could be mistaken by the untrained eye for aurora borealis, the best-known example of space weather, but Dr. Donovan believes Steve is something different. Using his ground data, measurements from the European Space Agency’s Swarm satellites and photos supplied by aurora enthusiasts on Facebook, Dr. Donovan concluded that Steve is a 5,500 °C streak of hot plasma.

Steve is just one example of how citizen science is shaping the work space physicists and aurora researchers like Dr. Donovan are doing. “I used to view the citizen science exercise as a lot of people doing some kind of grunt work for us,” says Dr. Donovan, “and what I’m finding is this is a very different model where it’s a few talented people who are complementing what the scientists are doing with a different kind of expertise.”

In Dr. Donovan’s case, it’s a group of skilled photographers that are supplementing his data with photos that would otherwise be difficult and costly to acquire.

Jonathan Barry is one of these photographers. A millwright by trade, Mr. Barry is a regular contributor to the Alberta Aurora Chasers who goes by the name Rusty Buffalo online. “It’s like an addiction,” he says. Mr. Barry’s nighttime photography primarily captures the aurora borealis, though he has also photographed Steve a few times. “Once you see it the first time, you want to see something better. It’s like a drug, I guess.”

Mr. Barry’s not the only one to get hooked by the aurora borealis. After a decade of mapping the Earth’s magnetosphere, Dr. Donovan had been finding his largely theoretical work unfulfilling. It wasn’t until he inherited a trove of aurora data from a retired scientist in 1998 that he began researching the phenomenon. “I have never done anything else since,” he says.

Space weather like Steve and aurora borealis may be pretty, but it’s also significant. Dr. Donovan says that the space weather we see in Canada is a window into other parts of the Earth’s atmosphere. And the rest of the world looks to Canada as a leader in this field, says Dr. Donovan, since it has more accessible land under auroras than any other country on the planet and has made good use of it as an observation platform. Thanks to citizen scientists roaming this land, lens in hand, research that would otherwise be lengthy and costly for Canadian researchers can now be done in a matter of weeks.

“It’s an inexpensive way for Canada to get involved with these big, big, big projects,” says Dr. Donovan, who works routinely with NASA space missions on aurora data collection.  “It’s a really exciting time to be doing what we’re doing here because we really are plugged in all over the world.”

The next step, he says, is to forge more formal partnerships. “We’re trying to figure out how to get our tools in their hands.”