After a strong student turnout in 2015, Elections Canada and student-led organizations have expanded their get-out-the-vote programs before the federal election this month.

Ahead of the federal election on October 21, campus groups across the country are on a mission to boost the student vote – with projects ranging from mock ballots for first-time voters, to pledge drives where students can win prizes for signing up to vote.

It’s all part of the plan to harness momentum after the last general election, which saw students and young people come out to vote in high numbers. “Different organizations are putting in a lot of effort to make students feel they have a voice and that their voice matters,” said Adam Brown, chair of the Canadian Alliance of Student Associations (CASA). “There’s a significant amount of power in voting if all of us actually go [and vote].” 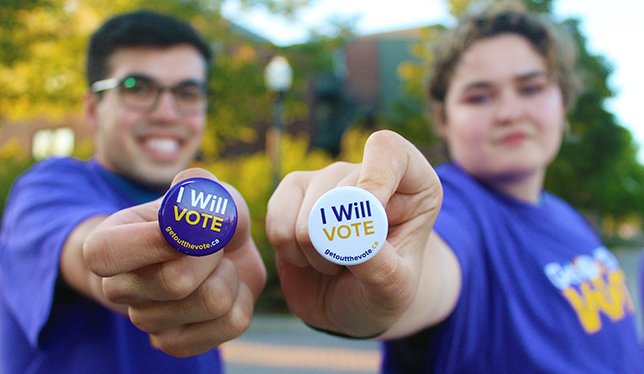 That voting power was clearly evident in 2015, when a staggering 45 percent of young voters backed the Liberal Party that went on to win a majority government. Until that election, turnout among younger Canadians aged 18 to 24 had been on a long-term plunge, before jumping to a healthy 57 percent in 2015. That’s the largest increase this age group has seen in over a decade, according to Elections Canada. “I hope that 2015 was a turning point in youth voter turnout. Hopefully we see a similar result in this election and in elections to come,” said Mr. Brown, who studies at the University of Alberta.

In the hopes of keeping up the trend, CASA rolled out its Get Out the Vote campaign this fall, with 20,900 votes pledged by the first week of October. It’s joined by other student-led initiatives like the National Student Letter signed by dozens of student associations to highlight the election issues that are critical to student voters. And after a successful pilot project that saw 70,000 students cast a ballot at some 40 campus-based Elections Canada offices, the federal agency will run its Vote on Campus program at over 115 campuses across the country this year, with the potential to reach 1.3 million students.

“Campus initiatives are critical because they become ways for students and the university community more broadly to have its voice heard when decisions are made,” said John Beebe, who leads a voter engagement campaign run by Ryerson University. “It’s also a great opportunity to demonstrate to the political parties that university students do vote.”

The potential impact of the student voter is augmented this year by the fact that young adults between 18 and 38, who encompass a key age demographic in universities, are the single largest voting bloc in the country – comprising 37 percent of the electorate – based on data by Elections Canada. But that potential will need to be matched with an equal amount of motivation.

“It’s hard to predict what the [voter] turnouts are going to be, but I get a sense that there doesn’t appear to be real excitement yet about this election,” said David Coletto of Abacus Data. “Younger voters need a unifying reason to go out and vote … and so far, this election seems like it has been a mishmash of policies without an overarching narrative.”

But programs like those run by CASA seem to be effective in uplifting that motivation. In 2015, over one in three youth voters said they were encouraged to vote by an organization working to increase turnout among younger voters, according to a post-election survey by Abacus Data. And in a more recent poll directly aimed at postsecondary students, the overwhelming majority said they plan to vote in 2019.

“I really do hope that we are starting to see a trend that will increase,” said Mr. Brown. “Not only are students interacting more with various campaigns like ours, but there’s also a much greater accessibility for them to vote on campus and not have to take the time to drive back to their hometown to vote. It’s all making a big difference.”