Can Canada keep its intellectual property from slipping away?

As research ramps ups dramatically due to COVID-19, some researchers say we need to do better to keep the knowledge, and develop the downstream products, here.

Sachdev Sidhu believes the engineered proteins he’s helped to develop could treat COVID-19 by stopping the virus from replicating in an already infected person. The University of Toronto professor of molecular genetics and his collaborators are using proteins they’d created to block the enzymes of the viruses that cause severe acute respiratory syndrome and Middle East respiratory syndrome, and adapting them for the novel coronavirus. He and his team received $886,090 from the Canadian Institutes of Health Research in March for their work.

In a second round of CIHR funding, Dr. Sidhu is part of a team led by colleague James Rini, a biochemistry professor also at U of T, that received $535,000 to develop therapeutic antibodies targeting the cell surface of the virus, preventing it from invading human host cells. That money has been spent on pre-clinical research. Dr. Sidhu says he needs millions more to fund human trials in the fall. “We’re spending other grant money to scale up and get into clinical trials,” he says. “That’s where we always hit the big road bump.”

Over the years, Dr. Sidhu has created seven companies from his inventions – and found investment outside of Canada for all but one. It’s happening again: the Italian government has offered him several million dollars, so this antiviral will likely be tested and commercialized there. Out-of-country investors compensate inventors, but the intellectual property rights – including any patents – and future licensing money, access, tax revenues and jobs end up in another jurisdiction. “If they fund 90 percent of the development, they get 90 percent of the reward. That’s the way the world works,” says Dr. Sidhu. 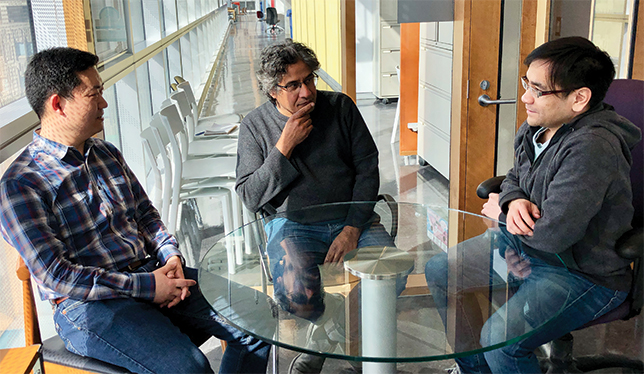 Getting a product to market

If this sounds familiar, it’s because Canada has a habit of funding world-class basic research – in biomedical sciences, but also in artificial intelligence and lithium ion batteries, among other areas – and giving away the IP, so other nations benefit from our ideas and early-stage investments. “We have a lot of excellent researchers in Canada. They register their IP, but registering IP is only one step in a long progression to getting a product on the market,” says Sarah Prichard, who just finished a term as acting vice-president, research, at Western University and has decades of experience in medical research in academia and industry.

Some COVID-19 projects that landed funding now show promising early results, and the patents behind them are beginning to leave Canada. A cell line developed here and owned by the National Research Council has been licensed to help develop a vaccine in China. That’s giving us some revenue, but no guarantee of access to any resulting vaccine or the profits from it. Losing our IP could leave us scrambling for treatments and vaccines to curb the pandemic, or paying top dollar for our own innovations that were fine-tuned elsewhere.

Fundamentally, it’s a money problem. “One of the challenges is investments in Canada are rare. The pocketbooks are shallower,” says Paul Hodgson, associate director of business development for VIDO-InterVac, a lab developing a COVID-19 vaccine at the University of Saskatchewan. Biomedical innovations such as vaccines take upwards of $1 billion to get to market. The Canadian government gave VIDO-InterVac $23 million in April, which Mr. Hodgson calls a “huge sum by Canadian standards,” while the U.S. government gave Pfizer US$1.95 billion in July. “It’s on a different scale.”

Dr. Sidhu confirms that there’s generous funding available elsewhere. “It’s so much easier to go to the [San Francisco] Bay area or Boston and get American money,” he says.

Experienced pharmaceutical companies, venture capitalists and governments hold portfolios of projects at various stages, expecting some to fail. “In Canada, we don’t have the financial backing, but also the risk-taking around that financial backing,” says Dr. Prichard. She says roughly one in 10 biomedical products make it to market because of issues around efficacy, price, competition from similar products or demand dropping off.

The barriers go beyond money. “The mindset in Canada is to build companies or ideas to sell to other companies, it’s not our mindset to build a company that’s going to last,” says Armen Bakirtzan, CEO of Intellijoint Surgical and a founder of startup hub Medical Innovation Xchange, both in Kitchener, Ontario. He says the entire structure of the Canadian startup ecosystem is designed around this expectation, with money for basic research and startups, but nothing past that. “It’s all about the ‘R’ side of ‘R&D’,” he says.

As a result, Canada has few large companies – beyond branch offices of U.S. giants – including pharmaceutical companies, plus limited expertise in drug development and business leadership to get biomedical products all the way to market. “The expertise is limited, the cash is limited and the market is limited,” says Mr. Bakirtzan.

Moreover, it can be difficult to sell treatments, tests, devices and vaccines to provincial healthcare agencies, he says. “Most companies don’t end up selling here,” he says. Most provinces procure drugs or devices by aiming for the lowest price point, which rarely favours Canadian innovations.

Researchers can get into tangles with their universities, too. In 2014, U of T’s Dr. Sidhu helped found the Centre for the Commercialization of Antibodies and Biologics at the university. However, last fall, the centre’s board decided to disband it, folding it into the non-profit Centre for Commercialization of Regenerative Medicine. Dr. Sidhu says he’s been unable to get clear information about this change and says he can’t access funds for his COVID research from CCRM. “That’s the problem with universities – politics rule,” he says. U of T says there should be no confusion: the CCAB board approved the decision that their remaining mandate and funds would be best managed through a merger with the CCRM.

Ideally, universities, researchers and the startup community would better protect their IP. “We need to be smarter in how we engage with investors,” says University of Windsor law professor Myra Tawfik. She’d like to see requests for things like “freedom to operate,” which allows an inventor to continue to research using the basic patent and come up with spin-off innovations. She says governments need laws and policies to help Canadians retain and defend their patents.

She suggests Canada would be wise to focus on specific sectors and carve out market pathways. “Maybe we could never produce a vaccine on our own. Maybe that’s something to give up on,” says Ms. Tawfik. But Canadians could secure strong patents on, say, personal protective equipment innovations, get products to market and even manufacture them here, she says.

There are larger moves to improve IP protection. A federal IP strategy launched in 2018 put $85.3 million towards updating laws, creating tools for business owners and launching a patent collective. Meanwhile, a February 2020 report from an expert panel in Ontario resulted in the provincial government announcing in July it was working on an IP action plan. Ms. Tawfik says the ongoing cost to the country is finally showing itself, and triggering a push for real change. “We need to see how IP could play a strategic role to benefit the economy,” she says. “If we don’t zoom in on that, we’re missing out on an essential feature of the 21st century economy.”