The vital role these two programs continue to play in Canada’s research landscape highlights the vision of those who pushed to create them two decades ago.

Although it was overshadowed by the ongoing COVID-19 pandemic, two important institutions of the Canadian research landscape marked a significant milestone in 2020 – the Canada Research Chairs program and Genome Canada both celebrated their 20th anniversaries this past year.

The two programs were launched in 2000 by the government of Jean Chretien as part of a plan to rejuvenate Canadian science after years of stagnation – along with the creation of the Canada Foundation for Innovation in 1997 and the Canada Millennium Scholarship Foundation one year later – driven largely by then-finance minister Paul Martin. (While CFI continues to this day, the federal government, then led by Stephen Harper, decided not to renew the CMSF at the end of the fund’s 10-year mandate in 2008.) 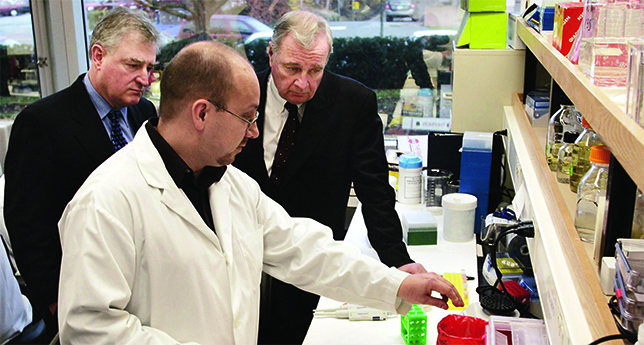 Bruce Vallance, Canada Research Chair in Pediatric Gastroenterology at the University of British Columbia, explains his work to then Prime Minister Paul Martin (right) and Industry Minister David Emerson at a press briefing in Vancouver in 2004 to introduce new CRC holders. Photo by CP PHOTO/POOL/Chuck Stoody.

Each program had different motivations, says Paul Dufour, an adjunct professor at the University of Ottawa’s Institute for Science, Society and Policy. The research chairs were created to help stem the perceived “brain drain” of talented Canadian researchers to the United States and elsewhere, while Genome Canada was intended to jump-start genomics research in Canada – a new field that had little presence in the country at the time.

They largely met those goals. The Canada Research Chairs, in particular, is “one of the most important programs ever created in Canada, it’s just had an incredible impact,” says Dr. Dufour. That impact can be seen in part through some of the now high-profile names of the first cohort of chairholders, including ecologist John Smol of Queen’s University and bioengineer Molly Shoichet of the University of Toronto (both of whom won the country’s top science and engineering prize, the Gerhard Herzberg Canada Gold Medal, in 2004 and 2020 respectively), and the country’s chief science advisor Mona Nemer, then a molecular geneticist at the Institut de recherches cliniques de Montréal.

For those that have won a chair, the effect has often been transformative, says Yves Gingras, who studies the history of science at Université du Québec à Montréal. His own Canada Research Chair, awarded in 2004, allowed him to greatly expand his lab and hire several graduate students. “It transformed the scale of research I did on the sociology of science,” he says. “For 14 years we could work without having to run after grants.”

Dr. Gingras was lucky, however, in that his university allowed him to use the majority of the funding from his chair to support research and students. Other universities used much more of the money to cover the chairholder’s salary, he says, leaving little extra cash for research.

Martha Crago, vice-president of research and innovation at McGill University, says that while the chairs have been good for individual researchers, their biggest impact has been in reversing the brain drain, especially when combined with the later Canada Excellence Research Chairs and the Canada 150 Chairs, which were targeted at overseas researchers. “They have had a big impact on returning Canadians, and bringing in international people,” she says. The program has attracted international attention and is jealously regarded by many U.S. universities, she adds.

The program has also had a profound effect on Canadian universities themselves, says Dr. Dufour. The chairs are distributed to universities based on their level of research income from the granting councils, and universities were required to create a strategic plan to explain how and why they will use the chairs to support particular research areas. For many institutions, this was the first time they had given any thought to such a plan. “It was a huge institutional and cultural change for universities as well,” says Dr. Dufour.

On the downside, the value of the chairs has remained the same and has failed to keep pace with inflation, notes Dr. Crago, so they cannot support the same level of salary and research funding as when they were first created (tier 1 chairs are worth $200,000 annually to the institution for seven years; tier 2 chairs are worth $100,000 annually for five years). The program has also faced serious criticism in its earlier years for failing to reflect the diversity of Canadian academia, falling short of targets to nominate women and racial minorities.

Dominique Bérubé, vice-president for research at the Social Sciences and Humanities Research Council and also responsible for the CRC program, says the program has undergone major changes in recent years to address issues of equality, diversity and inclusion. “In 2016-17 we stepped on the gas and put in place things to more strongly encourage institutions to take EDI seriously,” she says.

Institutions are now required to develop an EDI plan that outlines not only how they intend to meet specific targets, but also how they will improve the professional environment to deal with the obstacles that prevent them from meeting these targets. The program also employs specialists as volunteers to evaluate the plans and to offer help to address problem areas. The majority of institutions met their targets by the deadline of December 2019, says Dr. Bérubé, and now a new target has been set for the makeup of chairholders to reflect the diversity of the Canadian population as a whole by 2029.

To mark the program’s 20th anniversary, the federal government announced on December 17 an investment of $195 million to support 259 new and renewed CRCs at 47 institutions across the country. This investment was coupled with close to $14 million in new funding from CFI for research infrastructure to support chairholders. Along with an earlier announcement of new chairholders this year, the total investment marks the program’s largest in a single calendar year, the government says.

The rise of genomics

While the CRCs were designed to shore up Canadian academia, Genome Canada was an attempt to essentially create a whole new field from scratch and to ensure that Canada had a place in a field that was expanding rapidly alongside the excitement of the Human Genome Project. “We were out of the game in the genomics race, we weren’t taking it seriously,” says Dr. Dufour.

Genome Canada was set up to develop infrastructure, build research capacity, and to build links between the research and its potential applications, says Rob Annan, CEO of Genome Canada. To that end, it has a unique structure in Canada’s research landscape, set up as an arm’s-length body that required projects it supported to have co-funding from private-sector partners. “One of the key achievements is that we have had almost 100 start-up companies come out of our projects over the years,” says Dr. Annan.

The agency is also unique in not being focused exclusively on human health, instead also playing to Canada’s strength in natural resources by supporting work in agriculture, forestry, mining and other sectors. Six independent regional centres across the country help to forge deep connections with local universities and businesses, says Dr. Annan.

But splitting the focus like this across relatively small-scale centres and studies makes it difficult to build the large, focused efforts needed to conduct national-scale, strategic research projects in areas like precision medicine, as is happening in countries like the U.S. and U.K. “[Genome Canada] was a very good idea, and had a major impact when it was created. But it needs to evolve to meet the current demands of large-scale bioscience and big-data science in a way which makes Canadian science internationally competitive,” says Mark Lathrop, director of the McGill Genome Centre. “So far it is struggling to do that.”

Dr. Annan says the agency is at a pivot point. He says new tools like big data for large-scale population studies and CRISPR to manipulate DNA have fundamentally changed how genomics research works, and what you can do with it. “We want to use the capacity we have built up over 20 years to address really significant challenges like climate change, precision health, agriculture and bio-manufacturing,” he says. “These are all areas that are going to be fundamentally transformed by the new technologies, and our partnership model means we can really put that research to work to create benefits.”

The fact that these two organizations are still such a vital part of Canada’s research landscape 20 years on highlights the vision of the politicians and science policy advisors who pushed to create them two decades ago. “There was just this incredible amount of money and energy going into creating experiments to put Canada on the map,” says Dr. Dufour. “We haven’t seen the likes of that since.”