Tackling racism isn’t a ‘flash-in-the-pan kind of thing,’ says the head of the Canadian Association of Schools of Nursing.

In the video of some of Joyce Echaquan’s final moments, she lays in a hospital bed, crying out in distress. Despite her pain, Ms. Echaquan captured her experience in the Joliette, Quebec hospital on Facebook Live, recording hospital staff as they insulted and dismissed her. Ms. Echaquan, a 37-year-old Indigenous woman, had been admitted to the hospital because of stomach pains and reportedly had a medication allergy. She died shortly after sharing the live video.

Outcry over Ms. Echaquan’s mistreatment and calls to address systemic racism in health care have echoed across the country and the nurse caught on video insulting Ms. Echaquan was fired. The event was shocking and sad for the nursing community, but many argue that racism in the field is nothing new. In fact, it’s something students, professors and members of nursing associations say is embedded in their education.

Keisha Jefferies, a PhD candidate in the school of nursing at Dalhousie University, notes that the very foundations of modern nursing are grounded in Victorian ideals of womanhood. “When you think of a nurse in the historical context, they were regarded as angels or handmaidens, this kind of very pure image,” she says. 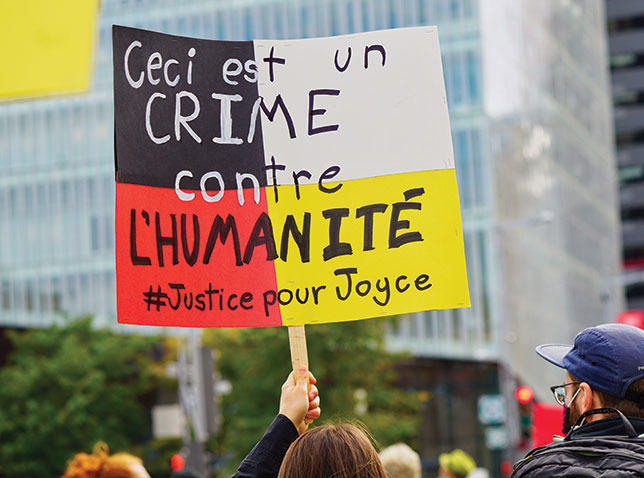 A protester holds up a sign for Joyce Echaquan at a rally in Montreal on October 3 to mark her death. Photo by The Canadian Press Images/Mario Beauregard.

Those who didn’t meet this ideal were prevented from entering the profession. The first nursing school in Canada opened in 1874, but Black students were not allowed to attend until the 1940s, after pressure from community groups and organizations. Ms. Jefferies argues that many of these assumptions about nursing still exist today and that anti-Black practices persist, holding Black nurses back.

Concerns over the curriculum

A major concern, Ms. Jefferies says, is curriculum content. In case studies, Indigenous patients are often “presented as being an alcoholic or struggling with alcohol dependency,” she says. “If there’s a case study that talks about Black people, their dental hygiene is very poor and [they] have tooth decay. So you’re attaching a lot of these assumptions to groups.” White skin also tends to be presented as the default “and anything that deviates from that is either labeled as abnormal or it’s not discussed.”

There are many conditions that present differently on darker skin – conditions like petechiae and even signs of respiratory issues – but this isn’t taught in most health-care curricula. This lack of information led a medical student at St. George’s, University of London in the U.K. to create a handbook for diagnosing skin conditions on Black and brown bodies, which Ms. Jefferies says has been incorporated into health and medical programs to supplement gaps in the curriculum.

Kim English is a professor in the Trent/Fleming School of Nursing, a joint program of Trent University and Fleming College. She has similar concerns about what nursing students are being taught. When she attended university in the 1990s and early aughts, she saw those harmful case studies that presented Indigenous peoples as drunks but was never encouraged to question stereotypes or discuss the bigger picture of root causes. “I certainly never had any conversations about the role of treaties and the Indian Act, and how that has been a key part of what we see around Indigenous health happening now [with] intergenerational trauma,” she says. “We’re not talking about our racist history as nurses,” Ms. English adds. “We [put] Florence Nightingale on a pedestal, but we don’t talk about how other nurses who worked with Florence … don’t have the same profile because they were Black and she was white.”

Ms. English is part of an informal group of nursing educators in North America trying to change harmful stereotypes in textbooks. Over Twitter, they discussed and called out a textbook that’s used to prepare nurses to become instructors, called Nurse as Educator, which has a chapter about teaching the “Four Main Subcultural and Ethnic Groups” and is “obviously aimed at preparing white educators to teach students of colour,” Ms. English says. It offers “ridiculous things to keep in mind” when encountering racialized students and patients.

Ms. English has submitted a paper to Witness: The Canadian Journal of Critical Nursing Discourse about decolonizing nursing practice, reflecting on her own socialization as a nurse. In the paper, she wrote about how, as a health-care professional and educator, she began to question that socialization “and how I hope that our institutions start to do that, too.”

The Canadian Association of Schools of Nursing (CASN) hopes they do as well. The association released a document in November to help guide nursing schools in implementing relevant Truth and Reconciliation Commission (TRC) calls to action. Because CASN is an accrediting body, its president, Cynthia Baker, believes the association has sway when it releases discussion papers like this one. While CASN can’t force its members to follow its recommendations or frameworks, “there’s typically a fair uptake of our guidelines,” Dr. Baker says.

The CASN Framework of Strategies for Nursing Education to Respond to the Calls to Action of Canada’s Truth and Reconciliation Commission paper was created in partnership with the Canadian Indigenous Nurses Association and with cross-country input. It identifies two calls to action that schools of nursing can make a reality: increasing in the number of Indigenous professionals working in health care and creating a requirement for nursing and medical students to take a course on Indigenous health issues, including the legacy of residential schools, treaties, rights and Indigenous teachings and practices. The document states that many universities and colleges in Canada have already begun to respond to the TRC’s calls to action and that nursing schools are “well positioned” to address and accomplish these goals.

Dr. Baker says CASN’s members and stakeholders are on board with making positive change. “I’ve never seen [before now] this level of commitment to equity, diversity and inclusion issues,” she says. “I don’t think it’s a flash-in-the-pan type of thing.”

Doris Grinspun, CEO of the Registered Nurses Association of Ontario (RNAO), knows that racism exists in the nursing profession, just as it does outside the profession. After the death of George Floyd in the U.S. in May and media reports of Black health-care workers – including some of her own colleagues – dealing with racism, she felt she and the RNAO needed to do something. “I thought, ‘Before we try to fix the world, let’s do something serious to actually fix nursing,’” she says. “I don’t believe that you can preach, promote, advance only the external world without looking in the mirror to see what’s happening in your own home.”

That something was the RNAO Black Nurses Task Force, which launched in June. Co-chaired by past-RNAO president Angela Cooper Brathwaite and nurse practitioner Corsita Garraway, the task force has a mandate to tackle anti-Black racism in nursing organizations, associations, academic institutions and places of employment.

Dr. Cooper Brathwaite, an adjunct professor at Ontario Tech University, says she didn’t experience racism growing up in Trinidad. She moved to Canada to attend Memorial University for a bachelor’s degree in nursing, later earning a master’s at the University of Manitoba and a PhD at the University of Toronto. “For some of the nurses I taught … who had experienced racism from childhood, it undermined their self-esteem and their mental health,” she says. When she herself began experiencing racism in Canada, Dr. Cooper Brathwaite says she didn’t know at first how to identify it. “All I knew is what was happening to me was not right.”

Universities weren’t having discussions about these issues when she was a student, but things are different now. Dr. Cooper Brathwaite says she was recently in a meeting with the dean of nursing at U of T to discuss initiatives the school hopes to implement, including tuition and research supports, and changing hiring practices. “Racism is a learned behavior,” Dr. Cooper Brathwaite says. “If people are open and willing to listen and understand where other people are coming from, [then] they too … would be allies of people of colour.”