Prolific academic, author and advocate Silver Donald Cameron will be the first to hold the three-year appointment.

Cape Breton University has appointed academic, author and environmental advocate Silver Donald Cameron the inaugural holder of the Farley Mowat Chair in the Environment for a three-year term. Dr. Cameron is producer of The Green Interview, a series of hour-long video conversations with more than 100 of the world’s leading environmental thinkers (including one with the late Farley Mowat), and of a multimedia environmental rights project called Green Rights, which includes a series of articles and short films, a feature documentary and a book. Additionally, Dr. Cameron has written 19 books – his 20th comes out in 2020.

The chair is a natural marriage of founder beliefs and university action. Farley Mowat and his wife Claire are prolific writers, whose combined 40-plus books have sold over 17 million copies. The Mowats have also been staunch defenders of nature, and following Mr. Mowat’s death in 2014, his widow bequeathed their summer home at River Bourgeois to the Nova Scotia Nature Trust. Funds for the Mowat chair come from his estate. 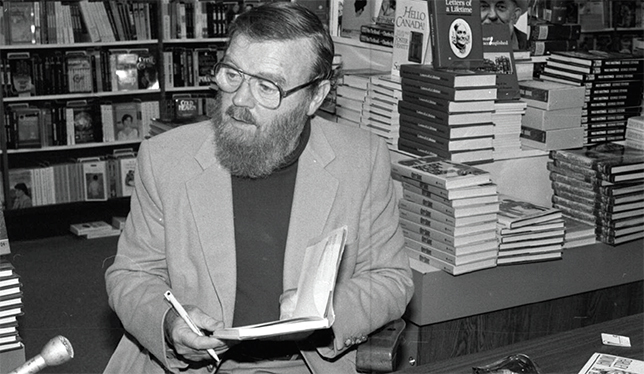 Farley Mowat at a book signing in 1985. Photo courtesy of Community Archives of Belleville and Hastings County.

Richard MacKinnon, CBU’s vice-president, academic, says the Mowat chair fits the university’s vision to be an institution that thinks and lives green. For example, all of CBU’s energy needs are provided by three industrial-scale windmills. On the academic side, Dr. MacKinnon points to CBU’s bachelor of arts and science in the environment. “You get two [degree concentrations], but you address environmental issues from a number of perspectives. As well we have the Verschuren Centre which does research on sustainability, energy and the environment.”

He also notes that Dr. Cameron recently taught a course at the university as part of his Green Rights project. “That class had everyone from business students to arts and science students. The research chair will allow him to continue his own work on his Green Rights initiative, video collection and archival online resources, but also will allow him to teach.” Or not. “We don’t want him to teach if he’s not doing his research,” Dr. MacKinnon adds. “If he teaches a course, that’s fine, but if he doesn’t want to teach a course that’s fine too. He can still communicate, give presentations, and be part of our academic community.”

Dr. MacKinnon sees the Mowat chair as part of CBU’s innovative, nimble academic environment. “Where other universities will focus more on the sciences, we have research chairs in things like musical traditions, for example. So we have gone a different path. I think we are a pretty innovative, resilient university. I think this chair is one more example of going down a different path that other universities haven’t taken.”