Capturing an eclipse at Western

A one-in-a-million shot of this past June’s solar eclipse also showcases the university’s campus.

When Allan Leparskas woke up before 5 a.m. on June 10, he knew exactly where he was going and what he was going to do that morning: take a photo of the annular solar eclipse that was scheduled to happen that day. His father, Henry Leparskas, a retired computer resource technician for Western University’s physics and astronomy department, had already scoped out where they were going to take their pictures: Brescia University College hill at Western.

“My dad and I do photography as a hobby together. We mostly take photos of celestial events, eclipses, interstellar clouds, basically anything astronomy-related,” Mr. Leparskas says. “As we knew where the sun would rise, one location we thought would work was on the hill at Brescia University College which would give us a great vantage point and also provide us with Western University as a foreground.” 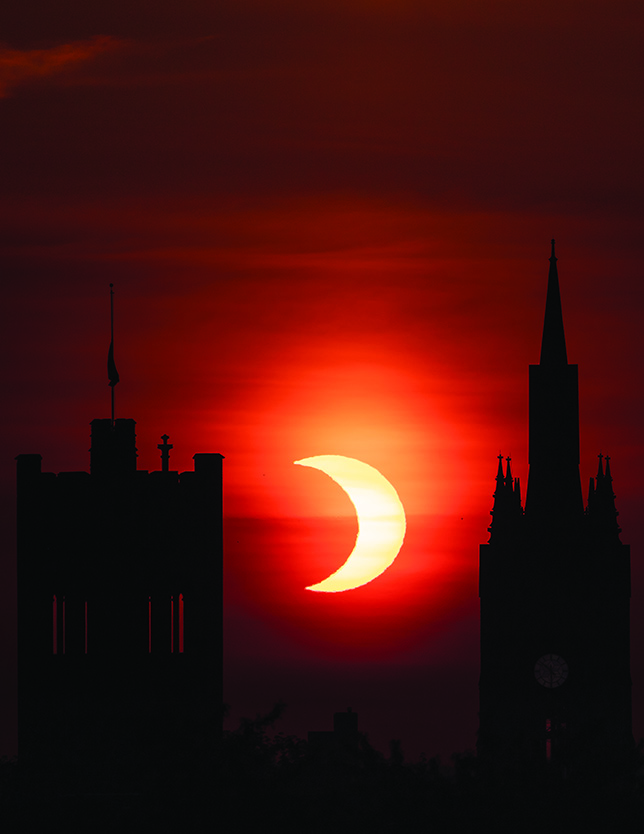 Allan Leparskas says he snapped over a hundred shots as the eclipse made its way across the sky, He hopes to hang a collage showing the progression in his home.

As the two were setting up their equipment, they were joined by a few members of the university community, as well as joggers who were passing by on their morning run. Eventually, a crowd of about 10 to 15 people joined them to watch the eclipse. One of the observers, Jan Cami, an associate professor in Western’s department of physics and astronomy, handed out eclipse glasses so people could watch safely.

At 5:52 a.m., Mr. Leparskas, a Western alumnus, snapped what could arguably be a perfect shot of the eclipse. For all of the amateur photographers who are curious, he used a Canon 6D Mark II with an EF 400mm f/5.6L USM lens. “One important thing to note was that this shot was taken without a solar filter due to how hazy it was, along with there being some thin clouds in the distance. Once the sun was higher in the sky, I had to put the solar filter on the lens to capture the rest of the eclipse.”

His intention is to make a collage of the eclipse through its phases with the Middlesex and University College towers as the foreground. He may even enter the photo in a contest or two.