Full-time academic staff are increasing in the higher ranks and dropping at the assistant professor level, according to 2016-17 UCASS data from Statistics Canada.

For the first time in five years, Statistics Canada has released results of the University and College Academic Staff System survey. The federal government announced in September 2016 that it was reinstating UCASS, which had been discontinued by Statistics Canada in 2012 in response to funding cuts from the previous government. The latest data on tenured faculty, full-time lecturers and instructors reflect the responses of 112 public universities and affiliated colleges for 2016-17.

Since 2010-11, the total number of full-time academic teaching staff is up slightly by 1.6 percent. Increases took place among full and associate professors (8.6 percent and 5.2 percent, respectively), while the number of assistant professors has declined by 15.9 percent. The number of entry-level and non-tenured faculty with a contract of at least 12 months has also decreased, by 2.1 percent.

Women advancing in the higher ranks

Women account for almost 40 percent of full-time academic teaching staff at Canadian universities, up from 36.6 percent five years ago and more than three times the proportion in 1970. It’s at the associate and full professor levels that women have made the most gains in recent years: an increase of 28.3 percent among full professors and 18.2 percent among associate professors, from 2011 to 2016. By comparison, although they are still in the majority, men in those higher ranks increased modestly by about 3 percent.

The median age of full-time academic staff is now 51, and that number rises through the ranks: 39 years of age for assistant professors, 49 for associate professors, and 57 for full professors. Since the end of provincial mandatory retirement in the mid-2000s, faculty who are 65 and older have been growing rapidly, reaching 10.3 percent of the professoriate by 2016. This cohort also earned the highest median salaries: $172,560 for men and $166,990 for women. 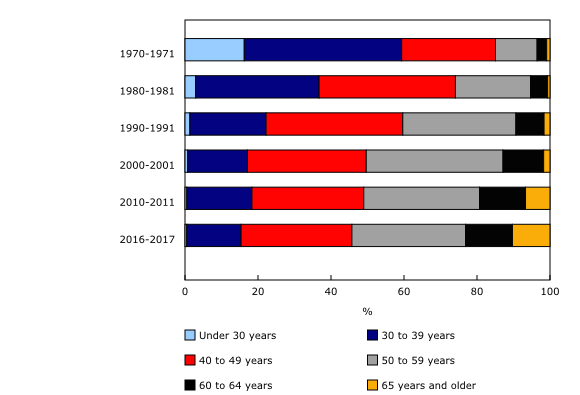 The median salary gap between men and women is quite narrow across academic ranks, with female academic staff earning 95 to 98 percent of what their male colleagues earn.

According to Teresa Omiecinski, the manager of UCASS at Statistics Canada, the data from the 2016-17 year is the result of the “incredible support” from institutions. She said she was impressed by the quick response rate from universities, which allowed preliminary data from 75 institutions to be released this past April. (Preliminary salary data often informs institutions and faculty associations in salary negotiations.)

In the five years since the UCASS survey was cancelled, about 60 percent of Canada’s universities participated in the National Faculty Data Pool to collect data among themselves, Ms. Omiecinski noted. Her department is now working to analyze that data, between 2011-12 and 2015-16 in an attempt to approximate and backfill data for UCASS.

Moving forward, Ms. Omiecinski said she expects preliminary data for 2017-18 to be released in April 2018. In terms of any potential changes in the future, she said Statistics Canada is currently undergoing a three-year feasibility study that would explore data collection on part-time academic staff and community college faculty. (This was signaled by Science Minister Kirsty Duncan at a recent science policy conference.) On the possibility of UCASS collecting other demographic data, such as race, Ms. Omiecinski said, “We are currently looking at that in our feasibility study and in our consultations with data providers and data users. That is certainly something we are exploring.”