The University of Regina is giving free suits to job-seeking students.

Clothes may make the man, but those clothes can come at a steep price – one that the University of Regina Students’ Union wants to help students pay. The concept behind the URSU Threads program is simple: students needing a suit for an interview can pick from racks of donations, and the outfit is theirs to keep for free.

Haris Khan, creator of URSU Threads and the student union’s vice-president of external affairs, says that work clothes were the last thing on his mind when he started university. “There’s a lot going on in your first year as a student,” he says. “Tuition fees are a big one, trying to figure out what major you want to pick – the last thing you want to focus on is professional attire.” 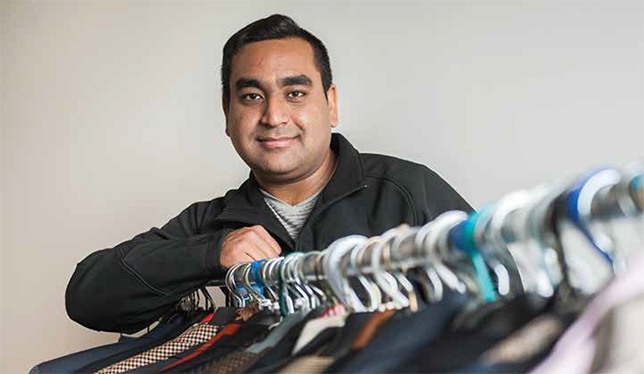 Haris Khan started URSU Threads, a service for students in need of professional attire, thanks to a donation of more than 100 suits from a local retailer. Photo by Brandon Harder, Regina Leader-Post.

When he was elected, however, he saw a need and began contacting clothing stores across Canada for donations. “Most of them said no,” Mr. Khan recalls, before correcting himself, “most of them didn’t reply.”

Mr. Khan eventually found success with men’s fashion chain Moores, which donated more than 100 suits. “That was a pretty exciting day in my life,” says Mr. Khan. “After jumping through a lot of hoops … I could finally start this program.”

Since Mr. Khan started the pilot project last fall, URSU Threads has clothed 308 students. In November, it expanded beyond menswear to include a limited selection of women’s clothing. (He says students looking for women’s attire have generally been referred to the university’s career services and to Dress for Success, a national non-profit for job-seeking women.) Mr. Khan says URSU Threads also recently became accessible to students at Saskatchewan Polytechnic, and in the long-term, he hopes to offer its services to the broader community.