Student leaders across Canada are applauding the measures announced in the federal budget yesterday saying they go a long way in providing relief to postsecondary students.

Over the next five years, $5.7 billion has been pledged to help young people access education and find jobs.

More than half of that, $3.1 billion over two years, is being allocated to double the Canada Student Grants from $3,000 to $6,000/year for a full-time student, extending the interest-free period for the federal component of student loans until March 2023, as well as enhancing repayment assistance and extending disability supports for people receiving student financial aid. 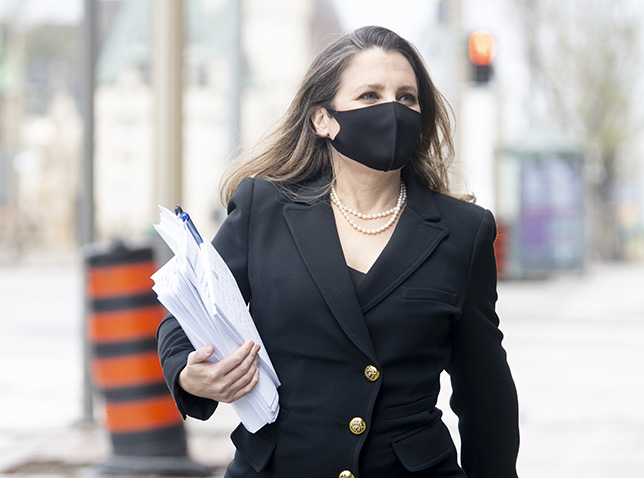 The federal government also announced measures to help young people find jobs. For postsecondary students specifically, the federal government will invest $240 million in the Student Work Placement program in 2021-22 to support work-integrated learning opportunities. The government pledged to invest $371.8 million for the Canada Summer Jobs program, helping to create 75,000 jobs for the summer of 2022.

Mitacs, the not-for-profit agency dedicated to research and training, will receive $708 million over five years starting in 2021-22, to create at least 85,000 work-integrated learning placements that provide on-the-job learning and provide businesses with support to develop talent and grow.

“Today’s significant announcement will allow us to continue to do that important work by giving young innovators even more opportunities to succeed while supporting businesses,” says our CEO @JohnWHepburn. #Budget2021 #innovation

“The package [of measures] will bring significant relief to students from coast to coast to coast who have been disproportionately impacted by the COVID-19 pandemic,” said the Canadian Alliance of Student Associations in a news release.

“We are glad to know that the Government of Canada is listening to the needs and concerns of students during this unprecedented time.”

Significant investments made in some research areas

As part of its plan to build domestic capacity and improve pandemic preparedness, the federal government pledged to strengthen Canada’s biomanufacturing and life sciences sector by investing $2.2 billion over seven years.

“This support would provide foundational investments to help build Canada’s talent pipeline and research systems, and support the growth of Canadian Life sciences firms, including $1 billion of support to Canadian firms through the Strategic Innovation Fund,” the government stated in its budget document.

As a part of that, the University of Saskatchewan’s Vaccine and Infectious Disease Organization (VIDO) announced it will receive $59.2 million to support the development of its vaccine candidates and expand its research facilities, including a National Centre for Pandemic Research.

The Gov’t of Canada announced $59.2 million to the #USask @VIDOInterVac to support the development of vaccine candidates and the expansion of its research facilities, including a National Centre for Pandemic Research. https://t.co/L5c51LT3Zz

Pending necessary approvals, VIDO said it will also use the funding to upgrade its level 3 agriculture facility to biosafety level 4, significantly increasing Canada’s capacity for vaccine and research development on all infectious diseases.

The federal government is also proposing to launch a pan-Canadian genomics strategy by providing $400 million over six years. It said the funding will provide $136.7 million to Genome Canada over five years for “mission-driven programming … to kick-start the new strategy and complement the government’s existing genomics research and innovation programming.”

#Budget2021 announces $400M for a new Pan-Canadian Genomics Strategy, including $136.7M for @GenomeCanada to kickstart the Strategy, with further investments to be announced in the future: https://t.co/QFZRV4h1Q0 pic.twitter.com/UTPzaPw8Lu

It said the biomanufacturing and life sciences funding announced in the federal budget will help build “Canada’s talent pipeline and research systems.”

The federal government is also proposing to invest $360 million over the next seven years to develop and launch a national quantum strategy that will “amplify Canada’s significant strength in quantum research,” which looks at how everything from life-saving drugs to next generation batteries are developed and designed.

“Federal investments in this area will allow Canada to stake a leadership claim in quantum,” said Ed McCauley, president of the University of Calgary, where the Institute for Quantum Science and Technology is housed.

“This will foster entirely new industries here in Alberta in a space that is already emerging as critically important to the future global economy.”

The federal government said it will retool and modernize, at a cost of $90 million over five years, the National Research Council’s Canadian Photonics Fabrication Centre that supports the technology of generating and harnessing the power of light. The centre supplies photonics research, testing, prototyping and pilot-scale manufacturing services to academics and large, small, and medium-sized photonics businesses in Canada.

Other research investments announced include:

According to Sophie Montreuil, executive director of Acfas, an association that represents 3,200 francophone researchers, the budget “recognizes the importance of research.”

She said the increased funding for the tri-council funding agencies, the National Research Council and the Canada Foundation for Innovation are a step in the right direction.

She added that although the details will be unveiled in the weeks to come, she’s very pleased about the $121.3 million in funding Heritage Canada will receive “to offer a quality postsecondary education in minority language settings in Canada.”

Universities Canada (publisher of University Affairs) said in a statement to its members that the organization was pleased with the federal government’s commitments to higher education, research and innovation.

“Today’s biggest commitment has been made to students. Support for students is important, and for students to be successful, universities must be strong,” it said, adding that the research investments made build on decades of discovery research and focus on many areas where Canada leads the world.

“Canada faces intense research competition for talent, and continued investments will be necessary,” the statement reads.

As we emerge from the pandemic, the role universities play in our economic and social renewal is clear. The investments contained in #Budget2021—in student supports, research and skills training, and Indigenous education lay the foundation of Canada’s recovery.#CdnPoli #CdnPSE pic.twitter.com/nFgxUXvwUw

With a file from Pascale Castonguay.