The new urban reserve, a partnership with Star Blanket Cree Nation, was nearly 20 years in the making.

First Nations University of Canada’s Regina campus now sits on reserve land in Treaty 4 territory, by way of a historic agreement that representatives of FNUC and Star Blanket Cree Nation say will advance treaty rights to education and economic development.

The band and university formally signed an agreement with other partners including the federal government, University of Regina, City of Regina and CIBC, to create an urban reserve named atim kâ-mihkosit in Cree, or “Red Dog” in English. The reserve is named after the nation’s last hereditary chief. Dignitaries from organizations including the Assembly of First Nations, the Federation of Sovereign Indigenous Nations and the federal government attended a signing ceremony at FNUC in February.

The creation of the 32-acre reserve has been nearly two decades in the making, in part due to the need to settle all third-party interests, explained FNUC vice-president, academic, Bob Kayseas. Visiting the campus, you might not notice any signage or indication of the urban reserve, but in practice the agreement allows the university and first nation to work together on new developments such as a student residence on the land. 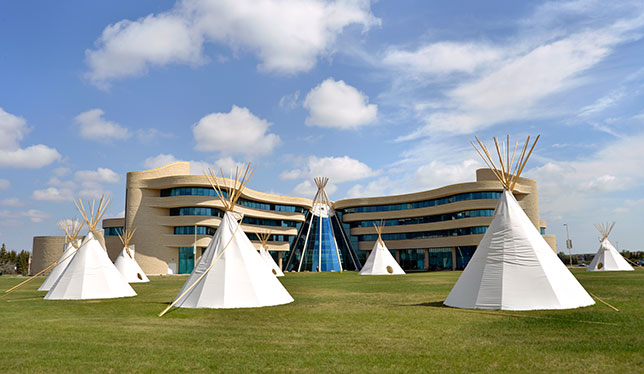 “It is symbolic in many ways,” Dr. Kayseas said. “We’re trying to provide postsecondary opportunities for many people who need to try and challenge their life circumstances. For us the approach we take is we actually have a strong element of culture and tradition in all of our programs. Being on reserve is just one step more along that road.”

Chief Michael Starr of Star Blanket Cree Nation reiterated the importance of honouring treaty rights to education. “I believe our vision from our nation coincides with [the university’s] vision,” he said. “We are a strong nation in terms of understanding our ancestral ways, for our young people to pass that on.”

“For sure it’s been a long time in the process,” Chief Starr said. “It was a good process I believe for our nation to be involved in because it is postsecondary education, a lifelong learning process. We are proud hosts.”

When it was signed in 1874, “Treaty 4 committed Canada to maintain a school specifically on each reserve; however, Treaty 4 contained the proviso that First Nations would define when they were prepared or wanted formal education for their people,” writes Sheila Carr-Stewart in her article “A Treaty Right to Education,” published in the Canadian Journal of Education in 2001.