In more than 4,000 paintings over 15 years, Brandon University stands out as a favourite subject of plein-air painter Weiming Zhao. 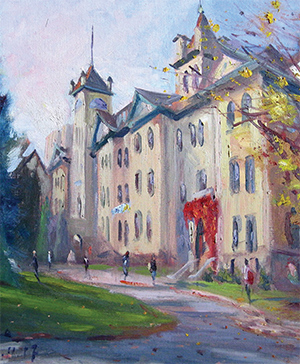 Painting by Weiming Zhao. Click the image to see the full size.

Every year, artist Weiming Zhao marks the anniversary of his move to Canada with a painting of Brandon University. On a clear morning last October, Mr. Zhao bundled up a paint-speckled easel, several tubes of oil paint and some brushes, and set off to sketch the oldest building on campus. Originally two separate structures, Clark Hall is the stately limestone-and-brick site of the first Brandon College and its adjacent women’s residence, built between 1901 and 1905. It’s iconic to Brandon U and deeply engrained in Mr. Zhao’s first memories of Canada. “It is my very first sight of BU on my very first day in Brandon, 27 years ago,” he recalls.

When Mr. Zhao came to Manitoba as an international student from China in 1991, his wife and two-year-old daughter stayed behind. The community he found on campus made the separation easier, he says. “For four years as an international student, I received so much support from the BU community in terms of financial aid from school and personal help from many faculty members.”

After completing his degree in psychology, Mr. Zhao and his family decided to permanently relocate to Canada. They’d planned a move to Montreal, where Mr. Zhao had been accepted to graduate school, but never made it that far. “After four years I found it so hard for me to tear myself from the community, especially when I was preparing for the arrival of my wife and daughter,” he recalls.  “With such a close personal tie with BU, I thought it would be far better for me to have my family get a new start in Brandon.”

Mr. Zhao has since become a familiar face around the city. Come rain, snow or sun, he heads out every day with easel and brush in hand to capture whichever local scene catches his eye. The artist, now in his late 50s, figures he’s averaged a plein-air sketch or painting a day for 15 years – more than 4,000 paintings in all.

One of his favourite portraits of Brandon U is that scene he painted last fall. Mr. Zhao recalls that Clark Hall was lit up in vivid shades of green, yellow and orange that morning. It was still early in the fall term and a few people passed on the laneway where he’d set up – a few even stopped by to chat as he worked. “I felt a certain degree of satisfaction of successfully capturing the kind of emotion the sight always brings back to me: the dignity of the institution and intimacy of it as a very caring and supporting community.”