24 researchers will soon join Canadian universities from institutions around the world – many of them expats looking for a way home.

Media theorist Wendy Hui Kyong Chun says she can’t wait to return to Canada after more than 25 years in the United States. Dr. Chun, who earned a bachelor’s degree at the University of Waterloo, left for grad school at Princeton University in 1992. She’s worked in the Ivy League ever since.

Dr. Chun, a professor of modern culture and media at Brown University, said she has enjoyed her time in the Ivies, but added it’s “crucial” she find her way back to Canada. “I’ve always wanted to go back to a country that has a real commitment to public education, teaching students who are more like me.”

Later this year, Dr. Chun will get her chance as holder of the newly minted Canada 150 Research Chair in New Media at Simon Fraser University.

Dr. Chun’s appointment as a Canada 150 Research Chair is one of 20 announced today by federal Science Minister Kirsty Duncan. The announcement brings the number of these prestigious posts up to 24. (The minister revealed the first four chairholders late last year.)

As part of the program, chairholders receive a non-renewable appointment of seven years with funding of either $350,000 or $1 million annually. The federal government invested $117.6 million to launch the program. The Canada Foundation for Innovation will provide an additional $830,000, and the Tri-Council agencies will administer the program. 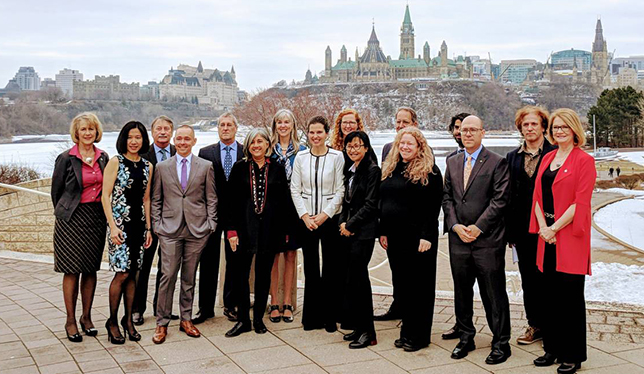 Minister Duncan (centre) was joined by 12 of the new Canada 150 Research Chairs at the announcement ceremony.

The latest chairholders named are:

The Canada 150 Chairs was devised as a program to recruit international talent to Canadian institutions. Among the winners, 14 come from institutions in the U.S., five from the United Kingdom, two from South Africa, and one each from New Zealand, Australia and Austria. (Detailed information about each Canada 150 Research Chairholder and their areas of research is available at the program website.)

In a media release, Dr. Duncan said that the new chairs “represent a brain gain for our country; a country that is earning its reputation for being open, diverse and welcoming to the scientists and strivers of the world.”

Nearly half of the chairholders are, like Dr. Chun, expats returning to Canada. “I’m thrilled that Canada is putting these together,” she said. “I reluctantly left for the U.S. because I was told that if I wanted to be a professor in Canada, I would have to leave.”

At SFU Dr. Chun will create the Digital Democracies Group, a lab combining expertise and research from the humanities and data sciences for social justice issues. Part of her goal there, she said, will be to show her graduate students and postdocs that they don’t have to relocate to another country to do exciting research. “I’m really hoping that with these chairs … Canadian students will be able to stay in Canada.”

The government also stated it would prioritize gender equity in the Canada 150 Research Chairs program, and more than 58 percent of the chairholders are women. It was an aspect of the chairs program that appealed to Dr. Chun. “I think it’s really important to keep women coming into all fields,” she said, noting that as a Canadian woman in an engineering program in the late ‘80s, she was greatly impacted by the massacre of 14 women at École Polytechnique in 1989.

“The Montreal Massacre was a turning point in my life. … [I]t wasn’t until the massacre happened in my second year that I really started taking courses in the humanities because I needed answers that engineering couldn’t give me.” Now her work combines research and expertise from engineering, the humanities and the social sciences to try to solve some of the world’s pressing concerns.

“If you look at the big problems before us – something like fake news or echo chamber or global climate chance – they’re too big for one discipline to solve,” said Dr. Chun. “We need to challenge each other’s first principles in the nicest way possible in order to solve those tough questions.”