When COVID-19 vaccines became available in Manitoba last December, the federal and provincial governments turned to a university health institute to administer the vaccines to the population within the province’s 63 First Nations, six northern rural municipalities and 47 Northern Affairs communities, which include Métis, First Nation and non-Indigenous populations.

Ongomiizwin, the University of Manitoba’s Indigenous Institute of Health and Healing, which is part of U of M’s Rady Faculty of Health Sciences, was asked to do the work because of its 50 years of clinical outreach programming to more than a third of Manitoba’s First Nations communities and in Nunavut.

“We were one of the few clinical operators that could [manage the pandemic response] quite readily, and we also had access to clinicians within the broader faculty,” explained Melanie MacKinnon, the executive director of Ongomiizwin and a Cree registered nurse. 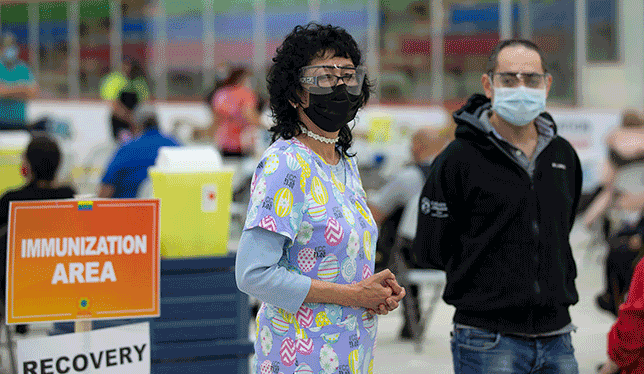 In fact, many of the faculty and staff at Ongomiizwin took on top roles within the Manitoba First Nations Pandemic Response Coordination Team (MFNPRCT), including Ms. MacKinnon, who is team lead. Others include Marcia Anderson, a Cree-Anishinaabe physician who is public health lead and the vice-dean of Indigenous health and executive director of Indigenous academic affairs for Ongomiizwin; and overall lead and coordinator Melody Muswaggon, Ongomiizwin’s director of health programs.

“When we gave the call out for the vaccine roster, internally and to our First Nation partners, we had a goal of 350 vaccinators. We reached that goal within one week of the callout, between faculty, clinicians and learners, and which was a really incredible response to help our communities,” said Ms. McKinnon.

Since October 2020, the pandemic response team has deployed over 100 teams to help support and manage outbreaks in communities and mirrored that model once vaccines became available for a vaccine rollout, with support from tribal councils, the Canadian Red Cross and federal and national labs.

The first vaccine clinic started in Manitoba on March 20, and by May 21, 71,005 doses had been administered, with 36,600 First Nations people having received their first dose and 17,363 receiving their second dose. The team is currently busy planning to vaccinate 12 to 17-year-olds with Pfizer, now that it’s been approved.

The entire COVID-19 response work has been a huge logistical undertaking, says Dr. Anderson, adding that it’s beyond most logistic work that would happen in a university.

Last fall, with support from federal partners, Ongomiizwin also helped plan an urban Indigenous testing site, Ma Mawi Wi Chi Itata Centre, which Dr. Anderson said is a good example of how health care can be done in an urban environment – the tests and labs are resourced by the provincial government and they are operated by an urban Indigenous community organization.

Untangling federal and provincial responsibility for these initiatives, test sites and vaccine roll-out went a lot smoother thanks to Ms. MacKinnon, who brought a solid health expertise and systems experience to ensure that every government body was on the same page about what was needed.

“Mel and I will often say that this work has drawn on every relationship that we have and basically all of our negotiation skills as well,” says Dr. Anderson.

At this point of the Manitoba First Nations Pandemic Response Coordination Team’s work, Dr. Anderson and Ms. MacKinnon paused to feel pride in the work that’s been done and how meaningful it is.

“It’s a real celebration of the groundwork that was done at the university to be in this position,” says Dr. Anderson, adding that the work they’re doing is reconciliation in practice.

“If there was any doubt on First Nations competency, and in their autonomy to run the clinics the way they wanted, and to run them in the way they knew how to run them, which is very different than our provincial counterparts, that should all be squashed,” says Ms. MacKinnon.