Researchers are using drones, geolocation and other cutting-edge tools to follow hard-to-study animals in their natural habitats.

The videos are magical. Shot by an unmanned aerial vehicle, they show killer whales swimming together in emerald-hued water off Canada’s West Coast. In the footage, a mother nuzzles its baby and it responds by sliding along her body before playfully slapping her on the head with its tail. The videos are offering scientists an intimate glimpse into the behaviour of southern resident killer whales, a critically endangered species.

“In order to help these whales, we need to know more about them – how they hunt, and where their food is,” explains Andrew Trites, project lead and director of the marine mammal research unit at the University of British Columbia’s Institute for the Oceans and Fisheries. “Drone technology is allowing us to be a fly on the wall and observe these animals undisturbed in their natural settings.”

This ground-breaking research is just one example of how innovative, high–tech tools are radically transforming the study of wildlife. Not long ago, the standard field tools of wildlife biologists were a pencil and notebook. Today, the array of wonders includes tiny transmitters that can track a songbird’s entire migration route; camera traps that snap photos of wildlife in remote locations that can’t otherwise be monitored; and satellite-monitored tags that record where marine mammals travel, the energy they expend hunting, and the depth, temperature and salinity of the water in which they swim.

This treasure trove of data is leading to key discoveries that can drive better wildlife and habitat management decisions, and help preserve threatened animal populations in an increasingly crowded, developed and fragmented world. As Dr. Trites notes, “The technology has opened our eyes to things we were blind to before.”

Even notoriously, hard-to-study animals are revealing their secrets. In the snowy forests of the Yukon, researchers from Trent University, McGill University and the University of Alberta are employing cutting-edge tools to investigate the Canada lynx, an animal so elusive that even veteran hunters may never see one during their lifetimes. 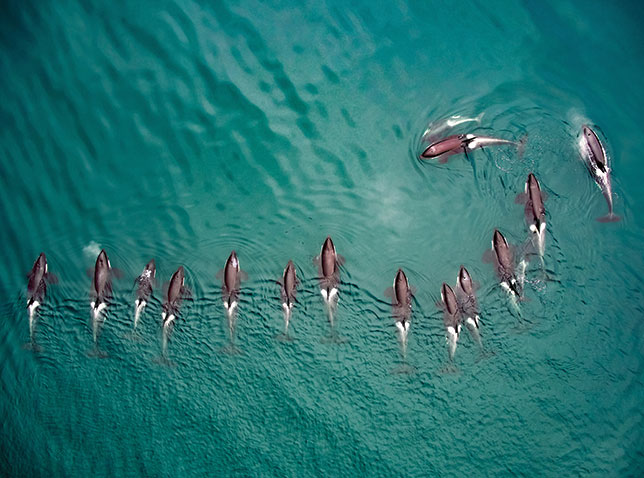 Members of the C1 and D1 pods of northern resident killer whales as they travel near Alert Bay, BC. Photo courtesy of K. Holmes/UBC – Hakai Institute.

Researchers trap and sedate the animals and then attach a collar with satellite GPS for tracking movement, accelerometers for identifying activity patterns, and an activity monitor that charts a lynx’s movements back and forth, up and down and from side to side. Every three months or so the devices are detached remotely and then retrieved to download the data.

The information is very precise. “We can get an idea whether the lynx is walking, resting, eating or grooming itself,” says Rachael Derbyshire, who’s doing her PhD in the environmental and life sciences graduate program at Trent University. There is also an acoustic recorder that enables the team to eavesdrop on the lynx’s interactions with other animals, down to sound of the crunching of bones as it makes a kill of its favoured prey, the snowshoe hare.

Look, up in the air

Technological advancements have also revolutionized the study of bird migration. For decades, satellite telemetry tags were the gold standard of animal tracking, but even the smallest weighed about 10 grams, far too heavy for the vast majority of birds. The invention of the geolocator has remedied that. Weighing less than a small paper clip, these battery-powered marvels house a sensor that stores light level data at regular intervals, allowing biologists to reconstruct a bird’s entire migratory route. The drawback is that they can’t transmit data, so they must be retrieved from the birds. Fortunately, most songbirds show great “site fidelity,” returning to the same nesting spots each year. 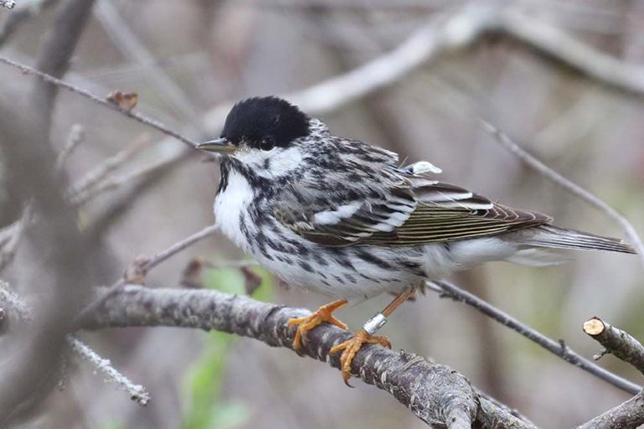 The Blackpoll warbler. Photo by Christian Artuso/U of Guelph.

Gathering information about migratory patterns is crucial for the conservation of songbirds whose populations have plummeted in recent years. Prior to the advent of geolocators, biologists knew very little about the lives of these birds during the seven or eight months when they were migrating or living in their southern haunts, but that is quickly changing.

In one dramatic recent example, scientists solved a long–debated mystery about where one of Canada’s fastest declining songbirds – the blackpoll warbler – goes after leaving the boreal forest each fall on a journey that ends in the Amazon basin. Ryan Norris, an associate professor in the department of integrative biology at the University of Guelph, discovered that the birds, which weigh just 12 grams (less than two loonies), fly eastward to Atlantic Canada, then directly southward on a non-stop 62-hour flight over the western Atlantic Ocean, before landing in the Caribbean for a few days and moving on to Venezuela. 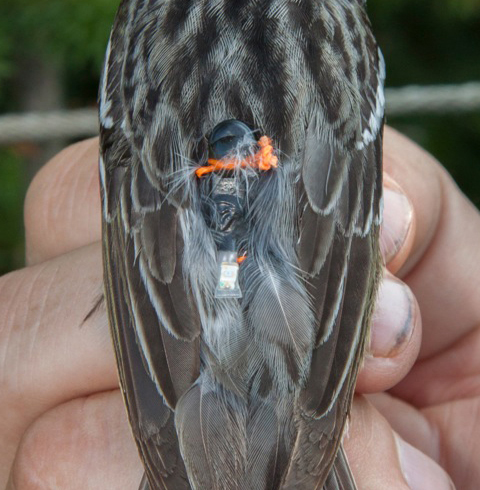 The tiny “backpack” is barely visible through the feathers of the blackpoll warbler. Photo coutesy of U of Guelph/Vermont Eco Studies.

“That’s the longest overwater flight for a bird of this size in the world,” says Dr. Norris. Making this feat of endurance even more remarkable, Dr. Norris has learned that the warblers that nest near Nome, on Alaska’s coast, cover an incredible 10,700 km on their annual migrations.

Migratory patterns have also long intrigued marine biologists. The Ocean Tracking Network (OTN), headquartered at Dalhousie University, is attempting to shed new light on this subject. OTN has deployed more than 2,000 Canadian-made acoustic receivers and monitors in the world’s five oceans to track the movements of 130 commercially, ecologically and culturally valuable aquatic species.

Study subjects wear one of two types of tags: acoustic tags, which send auditory signals to receivers on floating buoys or at fixed locations; and satellite pop-up tags, which are monitored from space. Fred Whoriskey, executive director of OTN, says, “These electronic tags are the most powerful tool we have. The smallest are half the size of my middle fingernail and can last from six to 12 months. The largest are the size of my middle finger and can function from 10 to 20 years. They allow us to follow an animal through its entire life cycle.”

As remarkable as this may be, scientists predict we will soon see even more breakthroughs, such as tags that run on rechargeable batteries or which can be recharged by the animals themselves, either with their physical motion or their body heat. Efforts are also being made to develop solar-powered drones and to modify their engineering to allow them to perch on branches or use thermal updrafts to glide like eagles. 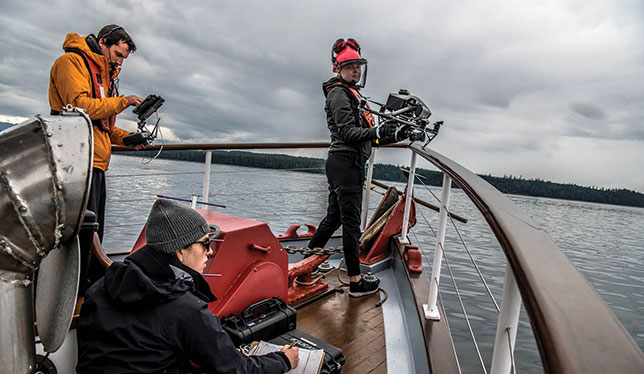 Ironically, the cold sterility of technology, once most closely linked with the notion of asserting dominance over wildlife, is now opening a gateway for scientists to study animals in a more intimate and revealing manner. This unfolding science is actually enabling the animals themselves to function as oceanographers, revealing the world that they inhabit through their various senses with minimal disruption to their lives.

The work is emotionally rewarding for the scientists as well. This fall, a team from UBC’s Marine Mammal Research Unit spent a month at sea, filming both northern and southern resident killer whales, not only from above with drones, but also from below, by placing suction-cup camera tags onto the orcas’ bodies. These devices allowed the crew to record what the whales see and hear and the sounds they make, as well as their three-dimensional movements, diving depths and feeding behaviours.

“With this technology we’re able to combine all the different data streams to get a complete picture of what is going on underwater. We’ve never been able to do that before. It’s quite thrilling,” says Sarah Fortune, a post-doc marine biologist, who designed the study.