“British Columbia today your host is Squamish” reads one of 12 signposts which comprise Native Hosts by artist Hock E Aye IV Edgar Heap of Birds. The signs dot the landscape of the University of British Columbia’s Vancouver campus and invite the viewer to consider the fraught concept of place while standing in one of the country’s most beautiful vistas: the Pacific Northwest. The installation, which shows the province spelled backwards and features the names of 12 different First Nations, is one of several artworks across campus that seek to activate space as part of the university’s outdoor art collection. Steered by outdoor art curator Barbara Cole and the University Art Committee (UAC), the collection is currently entering perhaps its most exciting, critical stage of programming since its beginning almost 70 years ago. 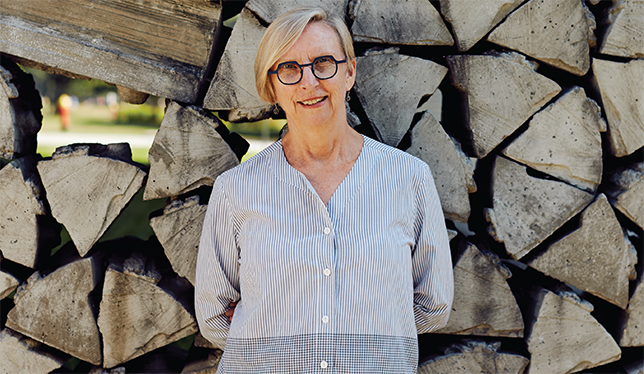 Barbara Cole stands in front of Wood for the People, a cast concrete installation by UBC alumna Myfanwy MacLeod, near the Belkin Art Gallery. Photo by Asterios Moutsokapas.

UBC has amassed an impressive public art collection since the 1950s. In the early years, most works were donated. By 2011, the university created a matching fund dedicated to the public art collection which has since afforded the UAC and curator more autonomy in acquisitions. “It really shifted our focus to commissions,” Ms. Cole says. The UAC has since dedicated those resources to artist residencies and commissioning site-specific works that engage UBC and its location.

Ms. Cole joined the university as outdoor art curator in 2017. The programming she has since realized has a tendency to interrogate the circumstances of a work’s creation, encourage viewers to interact with the site of an artwork and to consider the political nuances of public space – which is diminishing at a rapid rate in Vancouver. It’s because of the contentious nature of shared spaces that Ms. Cole says, “public space is one of the most difficult arenas for artists to work within.” However, she views this condition as opportunity rather than obstacle.

Public space on the university campus is unique, Ms. Cole says. Most public art commissioned by cities or hospitals, for example, focuses on the services they provide. Public art at a university, however, can deal with more nuanced ideas through research, critical analysis and discussion. Juxtaposing works with unexpected environments can recontextualize familiar spaces by asking, what does it mean to stand here and view this work?

“It’s the spaces in between the buildings where democracy unfolds,” Ms. Cole says – outside of classrooms is where discussion unhindered by syllabi can take place. In the same vein, Ms. Cole seeks to champion artists and projects from research-based environments and who integrate feedback from their immediate communities. Whereas universities can at times seem monolithic and impenetrable, these works represent “research made public,” she says.

Looking forward, the outdoor art program hopes to work with UBC’s footprint on the unceded, traditional and ancestral territories of the Musqueam people by collaborating with Musqueam artists and cultural stewards. The partnership is one more way the program challenges a mainstream tendency to think of land and space in abstract terms. Like the signposts by Edgar Heap of Birds it reminds viewers that you are here, in Vancouver, British Columbia, and it asks, what does that mean to you?