How curiosity-driven science interplays with innovation in Canada’s economy

An expert panel discussed shifting dynamics between the academy and industry in driving economic development in Canada.

Ten or 15 years before the recent artificial intelligence and machine learning research boom in Montreal, the doors and windows of Canada’s “ivory tower” may have been more shuttered to industry, but that’s changed, said Martha Crago, vice-principal of research and innovation at McGill University. “The doors and windows are opening to push things out, and they’re opening to welcome people in,” she said Dr. Crago, speaking at a panel discussion on “research, innovation and the new economy” in Toronto on Sept. 14.

In a wide-ranging discussion hosted by the Economic Club of Canada and moderated by Globe and Mail science reporter Ivan Semeniuk, three panelists talked about how curiosity-driven science connects with innovation, commercialization and Canada’s economy. Onstage with Mr. Semeniuk and Dr. Crago were Molly Shoichet, a renowned U of T engineering researcher who was up until recently Ontario’s first chief scientist, and Paul Davidson, president of Universities Canada.

Basic research “is at the root of innovation and commercialization,” said Dr. Shoichet, “and if we don’t invest in research we won’t have those innovations and we won’t have anything to commercialize.” Perhaps fittingly, the panel discussion took place the day after Uber announced it was investing $200 million in Toronto to expand an existing research lab focused on self-driving cars, led by a U of T artificial intelligence researcher, and to set up its first-ever engineering facility in Canada. 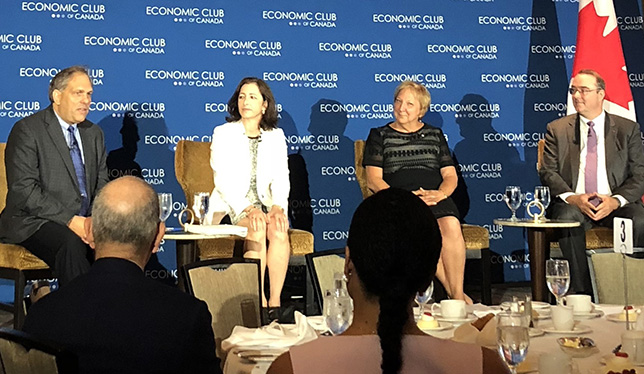 Panel discussion on “research, innovation and the new economy” in Toronto on Sept. 14. Photo by Research Matters/Twitter.

Relative to other countries, Mr. Semeniuk noted, Canada invests a low amount in research and development as a percentage of GDP. Canada also has low private-sector investment in R&D relative to other industrialized nations, he said. Add to this the perception that success rates for grants are low and that it’s tough for young researchers to break into the system early in their careers and not leave, Mr. Semeniuk asked panellists to weigh in on what’s currently working in Canada’s favour.

“There’s a lot that’s working really well in Canada right now,” Mr. Davidson replied. “The Naylor report was the most comprehensive study in 45 years. It’s not all going to be addressed in one year, it’s got to be a multiyear roadmap. We’re seeing much greater collaboration between universities and private sector, between and among universities, between universities and community colleges, and across regions in this country.”

The federal superclusters initiative announced last year, Mr. Davidson noted, “is a really great example of fundamental research being driven into a collaborative economic enterprise that is involving the whole community.” Another positive development, he continued, is the push at Canadian universities towards equity, diversity and inclusion. “One of the biggest shifts amongst Canadian universities has been our adoption of a set of inclusive excellence principles that says you cannot have excellence unless you are inclusive. … It’s a reflection that research is not just for the very few, it’s for the full community.”

The panellists also discussed the importance of retaining talent in Canada and encouraging youth early on to engage with science and entrepreneurialism. Dr. Crago said she was happy to see in the 2018 federal budget “a promissory note” of dedicated funding for graduate and postdoctoral students. “The hope is they will come back in this budget, but what is working in this country is that students learn to do research and innovation by doing. They are the motors of our research world,” she said.